With iOS 14.5, Apple broke the Podcasts app to the point where it is no longer usable.

More specifically, they changed it so it no longer shows only the most recent episodes. Instead, it shows everything from the podcast’s feed, which may contain thousands of episodes (for example, the Sean Hannity Show has 1686 episodes, going back to April 2016). You can configure the app to only show unplayed episodes, but there’s no command to mark everything as played, so you need to manually mark every single episode as played in order to get it to only show the newest episodes.

This is painful and I have no desire to click through thousands of episodes on the five podcasts I subscribe to in order to clean up the list.

So I’m looking for a new podcast app. Ideally, with the following features (most of which were in Apple’s older podcast app versions):

I haven’t found an app that does all this yet. Right now, I’m using Pocket Casts on iOS, but it doesn’t have a Mac version.

On the Mac, I’m using Mimir. It works, but it is missing the ability to automatically queue new episodes as they are discovered. It also doesn’t have a volume control, so I must change the system volume to adjust its output levels.

I found a short review article that recommends Mame Cast, but the Mac version requires macOS 11, so I can’t use it at this time.

What does the community here recommend as an alternative to Apple’s Podcasts app?

When I open the new podcast app, in the Library tab there’s a “smart list” feature that gives the latest episodes. That functions just like I’d expect. It shows the latest unplayed episodes of the shows that I “follow” (to use the new language.)

I’ve seen other people raise the issue you mention about the app not showing only the latest episodes. Is what I’m seeing not what you’re seeing?

That functions just like I’d expect. It shows the latest unplayed episodes of the shows that I “follow” (to use the new language.)

The problem is that there are thousands of “unplayed” episodes and no way to bulk-mark them all as having been played in order to get them off of the list.

Well, the “Latest Episodes” list does seem to be limited to the past week (or two weeks or month), but that doesn’t help when I pull up a single show’s list and end up having to drink from the firehose.

I see nothing under Library like “Smart Lost”. Are you talking iOS or MacOS?

It’s on the left hand side. It’s a list of unplayed episodes in your library. For me it just has the most recent episodes - it doesn’t show the many episodes that I haven’t listened too in the podcasts I follow.

(It’s on MacOS and iPadOS on the left bottom of the library view, it’s on the left sidebar in iOS)

Under Library on iPadOS, my left sidebar only had Shows, Downloads, and Saved. Until I tapped Edit - it wasn’t enabled! But certainly looks next to useless.

You can configure the app to only show unplayed episodes, but there’s no command to mark everything as played, so you need to manually mark every single episode as played in order to get it to only show the newest episodes.

If you sync podcasts between devices, you can mark podcasts as played in bulk on the Mac.

If you sync podcasts between devices, you can mark podcasts as played in bulk on the Mac.

I think I need to be running Big Sur for that to work. My Mac is running Catalina.

I also found that the two apps seem to step on each other. When I mark episodes as played on the iPod, it adds them to the set of episodes on the Mac (where they are all listed as unplayed), even though I had previously deleted them. Fortunately, re-deleting them doesn’t seem to mark them as unplayed on the iPod.

It’s quite a mess.

I don’t know if I can address all your questions but I too was thrown off by the dramatic changes to the Podcast app (don’t know why they’re calling subscribing “Following” or why it defaulted to sorting by Followed date in multiple places). This has prompted me to explore the interface a bit more.

Library > Downloads > Edit change to Group By Show gives we a view more like what I was used to under Shows, alphabetical list of shows with the number of downloaded episodes listed underneath.

Other sections of Library can be edited as well.

Library > Shows > [individual show] > … button > Settings This is where many settings can be changed per-show including hiding played episodes, enabling automatic downloads, and settings to limit and remove downloads. I don’t think this changed with this version of the app.

I see part of the problem is that many “Settings” are not even visible when the iPad is held vertically (camera at top). Plus unexplained, undocumented, and unexpected changes in functionality from the previous version. UI fail.

My guess is that they now have the ability (or soon will) to have you pay for a subscription. There needs to be a distinction between following the free version and subscribing to the paid version.

Apple already said that the reason was because users were getting confused, thinking that “subscribe” means “paid subscription”.

I don’t know of anyone who has made this mistake, but I could easily see people making this mistake in the future once Apple introduces paid subscriptions, which they just announced.

I highly recommend Overcast - written by Marco Arment from my favourite tech podcast, the Accidental Tech Podcast (ATP). It is both powerful and easy to use (my wife loves it too). It has useful features such as smart speed (compresses longer silent gaps between spoken words) and auto-levelling, so different podcasts all sound the same volume. Support chapter markings, for those podcast that provide them - meaning you can jump to the next section. Apple Watch support and you can continue playing a podcast on a web browser, if you’re at your Mac and wanted to finish an episode you started on your iPhone. You don’t even need to create an account - sign in with your Apple ID (via Apple login) on https://atp.fm and it just works.

I haven’t found an app that does all this yet. Right now, I’m using Pocket Casts on iOS, but it doesn’t have a Mac version.

If you subscribe for their cheap premium «Pocket Casts Plus», you have access to their —I assume—Electron desktop app. It costs USD1/month.

The desktop app has almost all feature the iOS has. Two features I know absent are chapter artwork (chapter exists) and Trim Silence & Voice Boost. 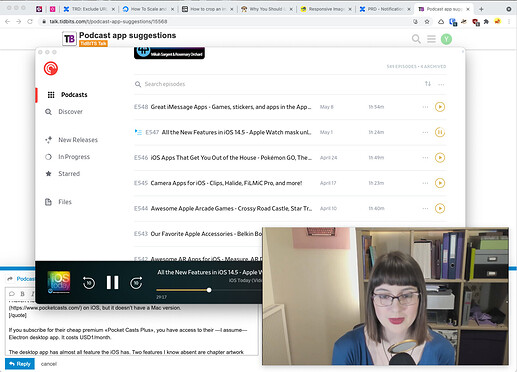 I use Overcast myself, but I never listen to podcasts on my Mac (only on my phone) and, while there is a web access to your downloaded episodes, it’s rudimentary and probably not worth much (the developer Marco Arment has talked about perhaps using Catalyst to port the iPad version over but it’s not high on his to-do list.)

Before Overcast I used Downcast and I prefer it to PocketCasts myself, and there is a Mac version as well as an iOS version of that app, with iCloud syncing of subscriptions, episodes, and settings. (I used PocketCasts on Android and initially when switching to iOS but there are things I don’t like about it.) It’s been a while since I’ve used it, but I remember it as a very good app. Paid apps I believe for both iOS and Mac, but not a subscription, and not terribly expensive IMO.

But do any of these handle video podcasts?

Overcast does not. Downcast does.