Knocking on wood a bit, but broke my usual rule and installed the v10 upgrade right away. Utterly unremarkable process, which is to say, good.

It does not seem to behave much differently from v9, but they groomed it for Big Sur. They seem to have made progress on an utterly annoying issue from v9, wherein a slow double-click to rename a file “in place” was only effective about 5 percent of the time, and taught the user to use the CMD-SHIFT-“R” key combination instead. In v10 it works about 50 percent of the time.

Worth noting that Cocoatech is trying out their announced “not a subscription” model where the v9 license and upgrade fee are good in v10 for a full year from date of purchase, at which time you can either pay the v10 upgrade or revert to v9. Since I did v9 in July when I purchased my Catalina-based iMac, I don’t have to make a decision until next July. Of course, I expect that v11 will come out near the end of 2021, so I always have the not-hoped-for option of reverting to v9, then purchasing v11.

I was using Path Finder since version 3. To me, it was a must use app. There were little glitches here and there, but it had features that Finder didn’t.

Over the years, Finder got better, and more glitches found their way into Path Finder. iCloud didn’t work which made it harder to use. I think in Path Finder 8, the desktop didn’t update when you delete files. That made me decide to go back to Finder.

In Finder, I can create tabs, open any file via MacVim, and send files to mail and text. I just haven’t needed Path Finder.

Long term user here as well. Looks like the iCloud files issue is still present in 10, which I have yet to work out whether I think it’s a dealbreaker.

I like all the additional features, many of which are replicated in multiple other apps from searching to renaming, I tend to reach for HoudahSpot and ABFR for those. Terminal, well, I have Terminal…

Hmmm. I’ll probably renew but the iCloud issue is a big stumbling block.

My pathfinder 9 purchase is just over a year old and when I purchased the new version they didn’t send me a new license and I keep being told my trial is running out.
No response to requests for help.

I have purchased PF 8 and 9 - received an order # and license by email. When I upgraded to 10 I just provided the license # from 9. Got the order and new license # for 10. No problems.

Bought the App earlier this morning… very cool. Just updated to Big Sur after installing it… no problems!!I This was a great suggestion… thanks all for the advise.

Could someone who uses Path Finder confirm whether it gives you the option to sort files by the old “alphabetical” (as opposed to “natural”) system, so that the name z11 is sorted before z2.

Path Finder is one of my go-to apps. I do not use the Finder very often.

I did exactly as you did except all I got was a receipt for purchase.

confirm whether it gives you the option to sort files by the old “alphabetical” (as opposed to “natural”) system, so that the name z11 is sorted before z2. 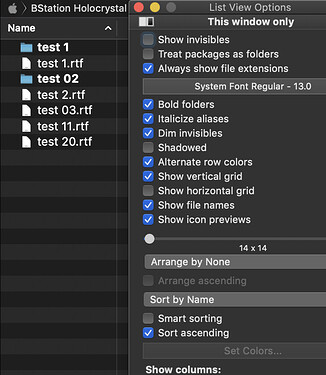 PF9 user here, and many versions before. Today I just discovered that Finder has an option to show the iCloud status in list view – very useful! PF9 does not. So despite every few days clicking “don’t show this again” and being reminded to “upgrade” to PF10, I decided I would do it if the iCloud status issue was included. Apparently it is not. So I will continue to use Finder for that and PF9 for everything else. It seems it would be an easy feature to add.