“To reduce battery ageing, have your Mac learn from your daily charging routine. Then your Mac can wait to charge past 80% until you need to use it.”

Surely by the time I need to use the last 20% I won’t have been plugged in to a charging source for some time, so how can it suddenly start charging?

Would someone whose command of English is better than mine please explain what the second sentence really means.

Optimized battery charging doesn’t mean it never charges beyond 80% until some crystal ball says you will need more than 80% power in your next session.

Optimized battery charging is based on the fact that rapidly charging a Lithium Ion cell when it is approaching full tends to result in shortened battery life. Slow (“trickle”) charging can extend a battery’s life, but of course, at the expense of taking longer to charge.

Battery chargers these days tend to implement a hybrid approach. They do a rapid charge up to some point and then slow down the rate until the battery is full.

Technically, these two phases are “constant current” and “constant voltage”.

It is common for modern chargers to use constant-current charging until the charger’s voltage reaches some threshold amount and then switch over to constant voltage until the battery is fully charged. Which is why you will see a battery rapidly charge up to a point and then take much longer to complete the charge.

Apple’s optimized battery charging is a variation on this. It uses constant current charging until the battery’s charge reaches about 80%. Then instead of doing constant-voltage at a fixed voltage, it will dynamically select voltages so it will reach 100% shortly before it thinks you will remove the device from the charger. For example, if your usage history says you remove it from the charger at 8:00am every morning, it might try to reach 100% at 5:30am, even though a traditional constant-voltage charger might be able to bring it to 100% at 2:00am.

The idea is that by charging more slowly after the 80% point, it will (hopefully) extend the battery’s useful life. And since you don’t need it to be fully charged when you’re asleep, there’s no practical downside to this slower charging.

Thanks David, appreciate and understand your explanation.

Actually, that’s the way it’s done on iPhone. But on a modern Mac you’ll at times observe the charge gets stopped entirely at 80%. You can unplug and after a while replug the Mac in an attempt to get it to charge all the way, but essentially you are at the whim of what macOS thinks your usage pattern is. If indeed it’s regular enough, macOS’ guess could well be right and the charging behavior adequate. If it isn’t, you’ll need to turn off “optimized battery charging” to force it to charge all the way.

Yes–the difference between iPhone and Mac is that the iPhone essentially always gets unplugged and carried around, but a Mac laptop may be primarily used while still plugged in. If you always use your Mac laptop plugged in, macOS will keep it right at 80% to maximize battery longevity. My guess is that if you routinely use it unplugged, it will shoot to get it to 100% when it thinks you’re going to unplug it.

You can unplug and after a while replug the Mac in an attempt to get it to charge all the way, but essentially you are at the whim of what macOS thinks your usage pattern is.

I believe there is an option under the battery icon in the menu bar (if you have put it there) that says something like Charge to Full Now. 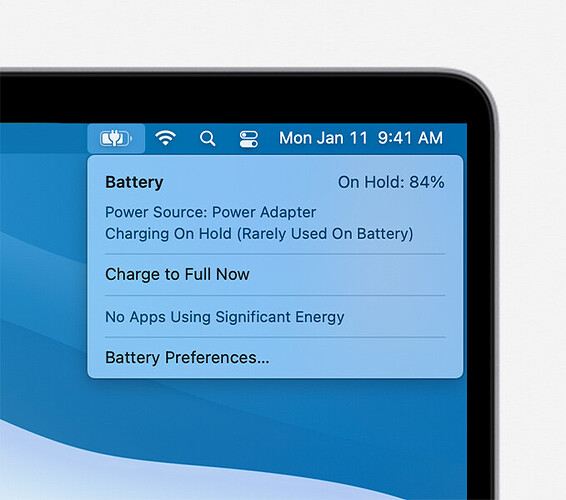 If battery charging is paused or on hold on your Mac

With macOS Big Sur or later, your Mac learns from your charging habits to improve the lifespan of your battery.

This definitely sounds like something for feedback. Apple may be unaware of a demand for a feature like this. Or they may think there aren’t many people who would find it useful. Feedback will (at minimum) add your name to the set of those who have asked for it. If enough people ask, it may end up in a future macOS release.

I agree and have done so now.

I have had an erratic/irregular plug-in schedule since I switched to the MBP 14", and as a result Optimised Battery Charging (OBC) does not work well (or perhaps even at all). This is in contrast to my 16" i9 which was plugged in all the time, in which case OBC worked very well.

I just need a toggle for enabling/disabling charging - and I am currently using AlDente Pro to do so. Will submit a feedback and perhaps invoke the popularity of AlDente to make the case.

p/s: The reason I don’t necessarily have to live with 80% charge is because the MBP 14" is so efficient, even with M1 Max 32-core GPU. I use a 30W charger most of the time, but the M1 Max consumes 60W when I ran multi-processing (multi-core) scripts in R/Python. So, the battery will slowly drain while the CPU is churning. Rather than having the battery charged to 80%, I will just pause any charging and let the charge level stay where it is, until I know I need to be on the go again. It takes so long for the charge level to drop that it’s hard to put charge cycles on the battery, which is a good problem I suppose.

Done. Thank you for the suggestion and the link to the feedback form (and your many, many useful comments about other issues).