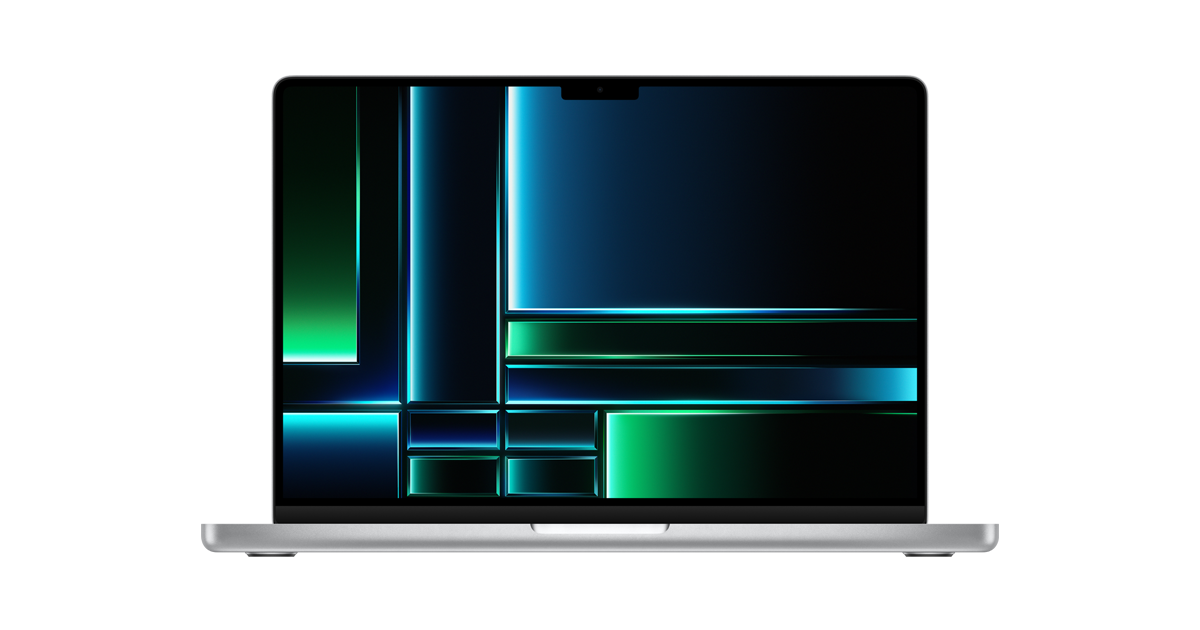 See all the technical specifications for the 14- and 16-inch MacBook Pro with the M2 Pro or M2 Max chip.

I think it was a mistake to provide only 2 TBolt ports on the low end Mini. One of the uses for a Mini has been as a small server. Sure, you can daisy-chain TBolt devices -if- they’re equipped with multiple ports.

(Of course, I still have some FW800 devices, connected to my Tbolt 2 Apple monitor, that talks to my M1 Pro laptop with the Apple Tbolt 2-Tbolt 3/4 adapter :-) )

I would expect Apple considers those who want a mini as a “server” should not opt for the entry level model. The entry level model is most certainly aimed at simple consumer and light office use, and perhaps edu. Just look at RAM/disk config. It’s all about hitting $599.

Two thoughts in response: (1) what would have been the marginal cost for 2 more TBolt ports? (2) I have a lot of experience with Minis as small office/home servers. They don’t do much computation, it’s mostly I/O. The low end CPU has been fine for this.

By the time you bump the entry model up a reasonable amount of RAM & storage (and upgrade the Ethernet), you’re at 1100, so it’s not so low-end anymore.

It is – as Simon noted – clearly a model aimed at the basic consumer/edu market and, while we can quibble about the marginal cost of each additional feature – Apple’s clearly struggling to get it to that price point (I suspect that’s why they kept the intel mini around because they couldn’t get the M1 minis down that low).

I think it was a mistake to provide only 2 TBolt ports on the low end Mini.

I think it was forced on them by the design of the M2. It doesn’t have as many PCIe lanes, so more TB ports wouldn’t be possible without some kind of mux (so two ports can share bandwidth). The Pro and Max have more lanes and can therefore support more ports.

Now, I realize this is circular logic - Apple designed the M1 and M2 chips and therefore could have given it enough PCIe lanes for four TB ports. I assume they didn’t because they didn’t believe it would be necessary for what is supposed to be the entry-level chips in the series.

Since these are TB4 ports, you can also use a hub/dock with multiple downstream TB ports. Of course, those aren’t cheap.

It’s like a hundredth of an inch…which sounds doubtful to me. The ports and architecture look pretty much the same as my M1 14 MBP…which suggests that it’s essentially the same case with slightly different innards…retooling to make it 0.01 inches thinner seems like something no company except Apple would consider doing and even them I don’t think I buy it as retooling isn’t cheap…but if whoever measured it squinted just right then maybe they could call it ’thinner’…and we all know that thinner is most definitely better at least according to Apple. No normal person would call that slight dimension change thinner and unless one used a caliper then how did they even measure it…even with a caliper maybe they just screwed it a little tighter so that they could round down instead of up. But a slight internal redesign would give them a bit more space for battery…which given the extra weight and extra claimed battery life seems about right.

I have a lot of experience with Minis as small office/home servers. They don’t do much computation, it’s mostly I/O. The low end CPU has been fine for this.

And I have no doubt Apple considers 2x USB3 and 2x TB4 perfectly adequate for that little home server.

Hubs exist for both, but the TB4 version although great is by no means cheap. If you’d actually have to get one of those, you’d probably be better off getting the higher end mini right from the start. Again, certainly a decision Apple prefers.

Yeah, I saw that the numbers were nominally different, but it almost feels like 0.25 mm in thickness was a measuring error or someone rounding differently. Apple even converts the numbers to the same number of centimeters.

And yes, there is an extra 30 grams of weight for the M2 Max config, but since Apple called out the difference in weight for the 16-inch for the M1 Pro and M1 Max, it seems possible to me that Apple just forgot to call out the M1 Max weight difference for the 14-inch last time. 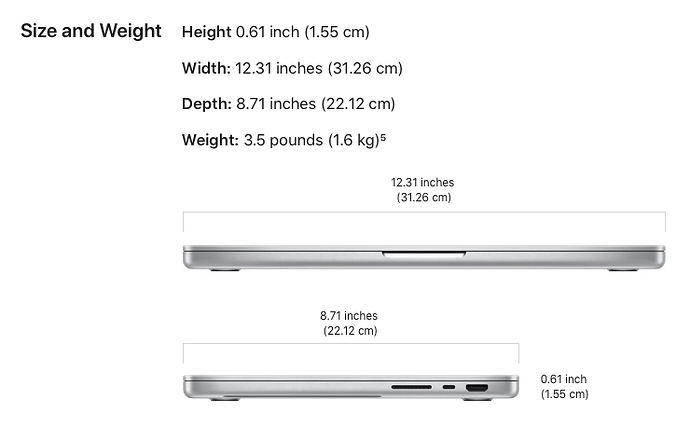 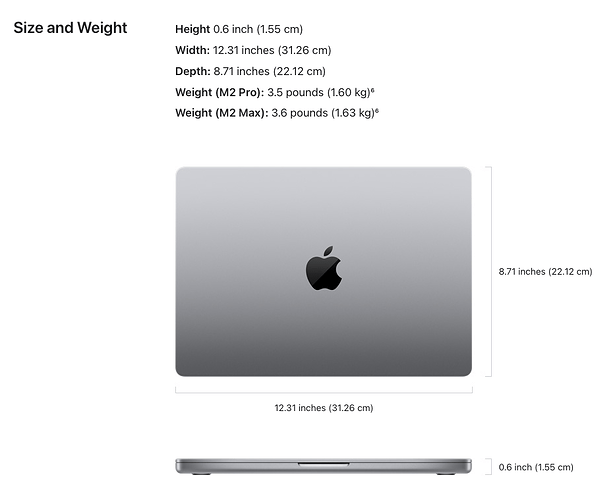 More seriously. As the thread above I linked to states, the Studio is going to surely need a relatively quick upgrade to the M2 Max chip given buyers can see it’s been added to the MBP now.

So still reckon it’ll be:

I’m either partially or entirely wrong of course, because as usual we’re talking about Apple here, and we all know they do things they feel like regardless of expectations, lol!

I’m interested in 3rd party upgrades to either Mini or Studio in the future. I understand that the Studio can’t be upgraded with memory or storage. The Mini can. Is this correct?

I’m still most curious about the RAM limitation on the M2 Pro. Both the base M2 and M2 Max got a 50% increase in maximum RAM, but M2 Pro stayed the same as M1 Pro.

This is probably due to a mix of factors — a 48GB RAM limit might have the mini intruding too far into Mac Studio territory, or Apple considers 32GB the dividing line between “serious” and “VERY serious” users — but I’m wondering if it could be as simple as their pricing structure for RAM upgrades causing a bit of a problem. Specifically, if you price out different configurations, you come to a surprising realization: the Max and Ultra chips can have their RAM upgraded for ½ the price of the M2 and Pro chips. Going from 8GB to 24GB on M2, or 16GB to 32GB on M1/M2 Pro, costs $400; for that same $400, you can go from 32GB to 64GB on M1/M2 Max, and you can go from 64GB to 128GB for $800 on M1 Ultra.

At the moment, you’re absolutely correct.

The RAM is part of the M1/M2 SoC. It’s not on the same die, but the RAM chips are packaged with it and are not replaceable without extreme micro-soldering skills. (Much like how RAM is connected with A-series SoCs in iPhones and iPads).

For most Macs, the flash storage is soldered to the motherboard. While someone with microsoldering skills might be able to replace them, it won’t work because the storage is cryptographically paired with the SoC.

The Studio has removable flash modules, similar to the Mac Pro. But they are cryptographically paired with the M1/M2 SoC and (as far as I know) only Apple has the software necessary to create the pairing.

When the Studio first came out, several people tried to replace the modules (or even swap their sockets), but it wouldn’t work because of the pairing. I think a few tried to use Configurator to see if it could create a new pairing, but that didn’t work either.

In theory, Apple could make user-upgradable internal storage for the Studio. They’d simply need to make available the software to pair new modules with the SoC. But so far, they haven’t done so.

After thinking about this some more, I think the explanation for the lack of a 48GB M2 Pro is pretty simple: Apple would rather people buy the binned (30GPU cores) M2 Max and upgrade that to 64GB for $600 than deal with the question of how to price 48GB on the Pro. If they kept to the $400/16GB of the 16-to-32GB upgrade, you’d be able to upgrade to a Max with another 16GB (64GB total) for $200 more, but if they reduce the price to be more in line with RAM prices on Max, it calls into question why RAM is so expensive on M2/M2 Pro.

The root cause is the surprisingly cheap price for the Max upgrade vs RAM prices — it costs as much as the (overpriced) 8GB upgrade on an M1/M2 — or, alternatively, the expense of RAM, particularly on the lower configs. It will be interesting to see how long they hold 32GB as a sort of dividing line going forward, especially since they’ve already increased maximum RAM on the base Mx chip.

Edit to add the obvious to the above (I shouldn’t really do this kind of thing at 2am): this only applies to Macs that have both Pro and Max as options — so only the MacBook Pro — but it actually applies even more to the desktop space, if someone is deciding between the M2 Pro Mac mini and M1 Max Mac Studio. Because the base Studio already has the Max upgrade that isn’t available to the mini, the cost difference is even smaller - it’s only the cost of the RAM, without the $200 upcharge for the Max. Configure an M2 Pro mini with the 12-core CPU/19-core GPU, 32GB of RAM, and 512GB of storage, and you get the same price (in the US) as the base M1 Max Studio (32GB/512GB) of $1999. For anybody who needs more than 32GB, the Studio is there, and doesn’t actually cost any more than Apple would likely charge for a 48GB M2 Pro mini, and has other benefits on top of the extra RAM.

I received my mini M2 on Friday - not a Pro, but stepped it up to 24GB of memory an a 1 TB SSD. I use it mostly for Lightroom, Photoshop, Premiere Pro and Audition along with lots of mundane stuff. So far I am very impressed, but, then again, my benchmark is a 2012 vintage mini. It is fast (again, that’s subjective) and that’s what I need. But speed is relative; maybe not as fast as a Studio, but for my needs it is excellent.

I received my base model M2 mini on Friday. I was looking to replace my little space heater i3 2018 mini that I use as a backup and media server, and when Adorama briefly gave a $100 discount via AppleInsider, I could hardly pass it up. It is the base model, so only 8GB/256GB, but for my server needs, it’s more than adequate - I have over 15TB of external Thunderbolt and USB storage hanging off of it.

I have no regrets about going with my 32GB/2TB M1 Pro 14" MacBook Pro last spring for my go-anywhere, do-anything computer. It’s usually in clamshell mode under my desk, hooked up via one cable to a ridiculous collection of Thunderbolt peripherals and USB hubs (that one cable charges the laptop, to boot). If I was buying today, though, I’d be tempted to pair an M2 Pro Mac mini with an M2 MacBook Air for travel - that would give me a faster everyday setup, and a lighter travel setup. That said, you really can’t go wrong with any Apple Silicon Mac - they’re completely redefining the performance expectations for small, power-efficient computers up and down the line.

hooked up via one cable to a ridiculous collection of Thunderbolt peripherals and USB hubs (that one cable charges the laptop, to boot)