I love everything about the new iPad Pro that I didn’t like about my previous one. you can read more about it here. 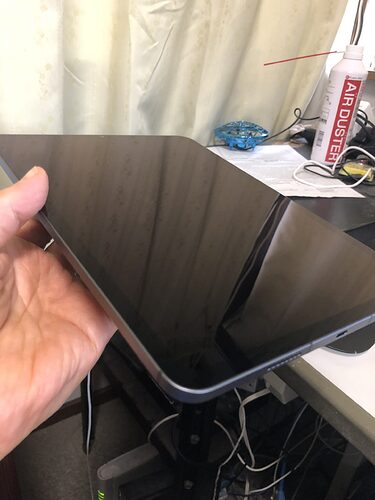 I wasn’t going to spend much time posting about yet another iPad upgrade, but I am so pleased by my new iPad Pro that I had to write about it. I ordered it on May 1, with a delivery window of…

Did you sell your 12 inch through an online reseller, or personal sale? I have the new 11 inch and will not need my 12 in or 9.7 in as it combines the best of both of them.

Usually I sell my old devices at Yahoo Auction (the main auction site here in Japan) where I have a high seller score.

But this time I decided to try Craigs List for the first time, with some trepidation. I got a few low-ball offers, and then a very sincere artist who had the 11 inch and needed a bigger screen for her work, decided to also take a chance and offered me my asking price and it worked out very well.

My iPad 12.9 inch was still under month-to-month warranty, and she even bought me Apple gift cards to cover keeping up the warranty through the end of the year. She loves it, and we’ve had some nice communications back and forth.

Received a new 11-inch last Friday to replace my 2018 model whose screen I recently put a major crack in. Installed the iPadOS 14.6 update yesterday, and found the experience strikingly different from updating the older machine: before, the time between the end of the download proper and the beginning of the update itself was loooong (15 - 25 minutes). On the M1 machine, it appeared to take no more than 5 or 6 minutes (wasn’t timing it); in any case, much faster.

In typical use, my old machine lost 40 - 50% charge in a normal day’s usage, enough so that if I planned a day out of the house (not so much in the last year), I’d charge it at the 50% mark, just to be sure. The new iPad Pro hasn’t used more than 15% of full charge per day yet. I suspect that’s not too realistic, but the difference is stark.

I have no idea whether Costco has made it to Japan, but I’ve just discovered that what’s available in the retail warehouses (is that a sequitur-ish non-sequitur, or what!) is not necessarily just a reflection of what’s available on the website. For example, the 256 GB M1 iPad 11 Pros are present and in stock at my local (50 miles away) Warehouse, but not reflected by the website, which shows only the VERY pricy 1 and 2 TB storage versions. Costco also undercuts Apple by $10 on the new Magic Keyboard, and coupled with the no sales tax in Montana situation, I’m probably close to what I’d save by waiting for refurbs to appear. My own purchase is triggered by an aging battery in the tablet it will replace. I need to play a bit with an Apple Pencil to see how much that would be of use to me before committing, however.

Costco is in Japan. I know there’s one in Hachioji. I don’t know if they carry Apple products though. I went with the smart keyboard folio to keep things light since my main work is still on my MBP.

I see my late 2013 MBP will finally not be eligible for the next upgrade coming later this year. So I’m looking forward to the M2 (?) MBPs that will come out.

I forgot to ask. Do you use the Microsoft Office suite on your tablet? There are some REALLY negative reviews (many of them about Microsoft price gouging) related to licensing issues for the Office 365 mobile apps. I’ve not used these at all in iOS or iPad OS, and I wonder whether they can be used, whether my desktop subscription for the 365 Suite gains me user rights for the tablet products, or whether I’d be paying separate fees, and whether or not the tablet environment is a curse for using those apps.

Costco in Japan? I should have known!

I’m an Office 365 subscriber (personal, US account so it’s only $69/year) and it does include being able to use Microsoft Office on your iPad Pro. And I have used it occasionally.

If you are using a keyboard with it I didn’t have any particular issues, though the Google app suite (Docs, Sheets) is faster I think.

Microsoft support is pretty nice and responsive if you run into a problem.

FWIW, a family subscription (up to 6 users and up to 5 computers each in a single household) has an MSRP of $99 for 12 months, but you can do better than that. I just bought a subscription via Costco’s web site, paying $89 for 15 months. Microsoft’s servers did the right thing with the new subscription, extending my current one by 15 months.

As @doug2 wrote, it includes the mobile apps (iOS and Android) as well as the desktop apps (Windows and macOS) and web apps. It also includes (for each user) 1TB of OneDrive cloud storage, 50GB of e-mail storage (on outlook.com) and 60 minutes per month of Skype calling, which you may find useful.

Also of possible interest for those that don’t want to pay anything, Microsoft also has a free tier which includes access to the web and mobile apps (the desktop apps can be installed, but they only permit viewing and printing without a paid-up subscription), 5GB of OneDrive storage and 15GB of e-mail storage.

One downside of the 1 TB of OneDrive storage is that it isn’t really that useful, like iCloud or DropBox is. One reason is that it often fails to correctly handle files with Japanese filenames. I find I don’t use it that much.

But it’s important to have Office access simply because so many other people do. You need to be able to open and edit Word and Excel files at least.

You need to be able to open and edit Word and Excel files at least.

So these days what’s the consensus on using Pages and Numbers for that? Is importing/exporting sufficiently robust? I get MS Office through work, but I doubt I’d want to pay MS $100 a year for a software package I detest if it came out of my own pocket.

I don’t know what the consensus is, but I’ve never bothered to try to get used to Pages or Numbers because they are so non standard with the rest of the world.

I do use Google Docs and Sheets though. The syncing is excellent. If you’re doing collaboration it’s eery watching others edit the same document in real time.

But it’s important to have Office access simply because so many other people do. You need to be able to open and edit Word and Excel files at least.

If all you require is the view and print, you can download and install the desktop apps without any subscription/activation. You may get a warning about “reduced functionality” mode, but that’s OK if you don’t need to edit.

Additionally, the free tier of a Microsoft account will let you upload the file to OneDrive (you can use the web site if you don’t want to install and run the OneDrive app) and then edit them using the web or iOS versions of the apps.

If you need to edit them on your desktop, then you have three options:

Use a free compatible app like LibreOffice. Depending on your requirements, this may or may not be an acceptable option. Depending on your requirements, you might even be able to use software that Apple bundles, like Pages, Numbers, Keynote and even TextEdit. It might be worth a try, but I suspect the results won’t be acceptable if your documents use any non-trivial features.

Is there a real LibreOfiice or OpenOffice app suite that runs on iPad? (As this is a thread about the new iPad Pro 11”, that seems relevant.)

I do use the Office app on my iPad occasionally, and it’s not as powerful as the desktop versions of the apps, but it does work in a pinch. (My exercise log is on an Excel spreadsheet and it works well for that on the iPad. I did uses Numbers for a couple of years but it really became bogged down as I came to the end of the year. Excel never does.)

Is there a real LibreOfiice or OpenOffice app suite that runs on iPad? (As this is a thread about the new iPad Pro 11”, that seems relevant.)

Almost. According to LibreOffice, they don’t release a mobile version, but Collabora Office is based on the same code and is available.