I’m looking for a mouse to use with my MacBook Pro, iPad, and possibly a Raspberry Pi. I think my requirements are pretty basic. But I’m finding lots of ridiculous mice that are over engineered

and seemingly nothing that covers the basics. What I’d like:

Does anyone have any suggestions? It would be a bonus if it wasn’t hideously ugly, but I’m willing to sacrifice looks for functionality. Two buttons is plenty, not concerned about lots more. I just want something with a couple of buttons and easy scrolling. Apple’s Magic Mouse would be perfect if the Lightning port was positioned so that it could be used to connect a cable and use the mouse in USB wired mode.

Unless you hate trackpads it pushes all the buttons. Or, rather, doesn’t…(!)

I have the Logitech MX Anywhere 3 and that seems to fit the bill: 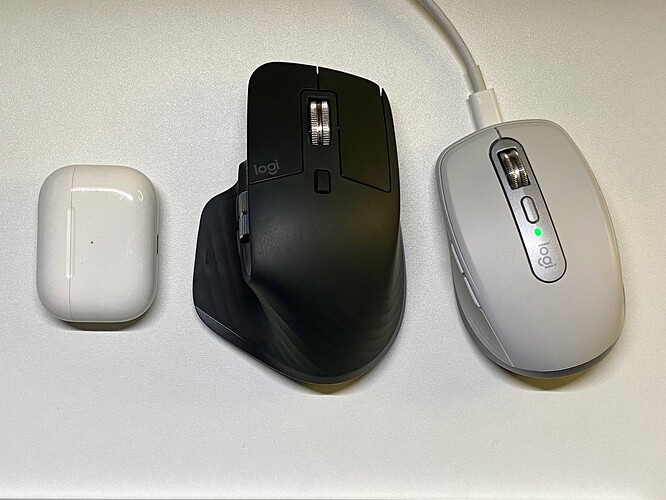 It is quite expensive (though in my opinion, worth the price) and quite small (it’s designed to go anywhere). I find it uncomfortable to curl my fingers and grab the mouse for long period of time, so I usually will ‘palm’ it with my index and middle fingers sitting atop the buttons.

FWIW, I fell in love with trackballs since I discovered them long ago, and my personal favorites have repeatedly come from Kensington. (Their most recent software was a disappointment, so I switched to SteerMouse.)

I’ve also been happy with Logitech mice for years

Yes, I was a trackball user for several decades, until the Magic Trackpad became just too darn useful.

Thanks for the details on the MX Anywhere 3 @chengengaun. I had seen it, but assumed it wasn’t ambidextrous because of the buttons on the side. I see now that Logitech do list it as ambidextrous, so I shouldn’t have written it off so quickly! Unfortunately the scrolling is a deal-breaker for me:

I need to be able to scroll horizontally without the keyboard.

However on further reflection, I’ve also realised that wired mode operation isn’t essential for me, which potentially opens up a whole host of other Logitech options (thanks for prompting me to look again, @tommy). Disappointingly, though, they don’t sell a mouse that is both rechargeable and has the tilt-scroll wheel to allow horizontal scrolling. It perplexes me that horizontal scrolling isn’t considered a baseline feature on mice (like a second button) given that we’re all used to it on trackpads.

Regarding trackballs and trackpads, I’m specifically interested in a mouse. Trackballs are not ambidextrous and I find them frustrating to use, and I prefer the precision of a mouse for an external device (I already have a built-in trackpad).

But given I no longer require wired operation, I wonder if anyone has further recommendations? Ambidextrous, horizontal scroll, rechargeable battery. That’s all I want

But given I no longer require wired operation, I wonder if anyone has further recommendations? Ambidextrous, horizontal scroll, rechargeable battery. That’s all I want

Two out of three is what you might find.
I like the Logitech M720 Triathlon because it fits my big hands and the side buttons work just as well in the left hand. I picked it because I was forever getting tangled cables and grabbing the wrong mouse. It also fit my big hands as did my favorite wired Microsoft Comfort Mouse 4500. Switching between three hosts is easy - the button is out of the way but easy to reach. I programmed it for no action on depressed scroll wheel, which happens when I am enthusiastic about scrolling. My primary side button use is Back and Forward which works in Browsers and many other apps. The first one I bought was on sale for about $30. I found it so comfortable and useful that I have purchased two more at the outrageous prices one can attribute to the WFH boom. I also now have the Logitech MX Keys keyboard which also connects via to three different hosts and shares the same support application.

Frankly, I don’t find a rechargeable mouse to be that special. Under heavy daily use the M720’s AA cell last weeks and swapping in a new cell is almost instant. We have many devices which use the AA cell so we always have a small stock.

My definition of “ambidextrous” when applied to mice is that the design does not prevent comfortable use in either hand. Size and buttons that are easily operable with either hand are most important. For me the M720 fits both my hands and my work style.