I will try to summarize. I followed apple advice as stated in article: Migrate your Aperture library to the Photos app. No problem. HUGE library (400GB). So I now have 2 libraries for use in photos. I want to combine them into one (will be 600+ GB) for ease of use and also iCloud backup. I read an article by Adam (TidBITS founder) from 2019 about merging photos libraries using iCloud.
Need to Merge Photos Libraries? Here Are Your Options - Mac Business Solutions - Apple Premier Partner

Maybe there is a better way?
Thanks for any info/ advice/help

Ah, that was one of my TidBITS Content Network articles for Apple pros.

I think you should be fine here, assuming of course, that you have 2 TB of iCloud storage available. You want to make sure you have Download Originals to this Mac selected in Photos > Preferences > iCloud.That will ensure that everything is also on the Mac. 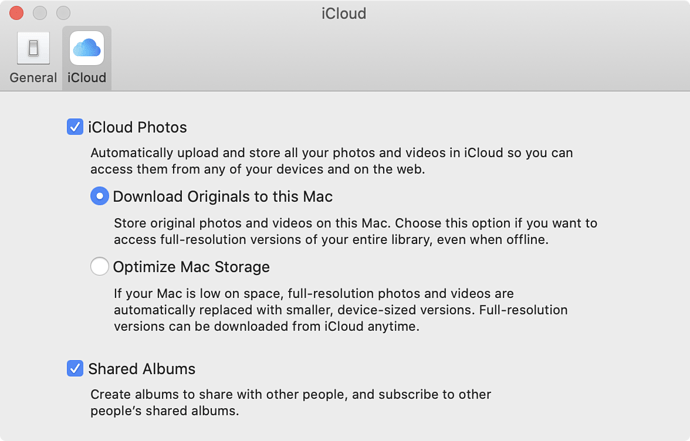 Then look at the bottom of the Photos display, under all the thumbnails, and make sure it’s not still downloading.

As long as it says “Updated Just Now,” everything should be local as well as in iCloud Photos.

When you set the second Photos library as your System Photo Library, Photos sees all the previously unknown photos and starts uploading them, and downloading everything that’s in iCloud but not yet downloaded. That’s how the merge happens.

To be fair, I haven’t done this in a long time, so I can’t absolutely say it works the way I say it does based on current experience. But it should, and of course, you should never undertake such an operation without multiple good backups.

So great! Thank you. I will triple check the back up but all makes sense now. I really appreciate the fast reply and care.