Live, non-Internet radio on my iPhone 6?

A friend gave me his old iphone 6 which I’ve been using as an ipod touch. No cell plan. I’d like to use it to listen to live radio, but as far as I can tell, that option doesn’t exist. All the apps I’ve found only stream radio over the internet.

Am I missing something, or is this true?

If so, any suggestions for a non-Apple MP3 player with a real radio tuner? (I know, this is all about Apple, but I’ll bet someone here has a suggestion).

If so, any suggestions for a non-Apple MP3 player with a real radio tuner? (I know, this is all about Apple, but I’ll bet someone here has a suggestion).

If you’re looking for an Apple one, if you can find one used, the iPod Nano from the fifth generation on has a radio tuner.

The iPod Nano (stylised and marketed as iPod nano) is a discontinued portable media player designed and formerly marketed by Apple Inc. The first generation model was introduced on September 7, 2005, as a replacement for the iPod Mini, using flash memory for storage. The iPod Nano went through several differing models, or generations, since its introduction. Apple discontinued the iPod Nano on July 27, 2017. Development work on the design of the iPod Nano started only nine months before its la...

Listen to broadcast radio on iPhone

You can play thousands of broadcast radio stations on iPhone with no Apple Music subscription required.

This would require an internet connection. It would work where John had WiFi, but not away from WiFi, where he would have no cellular plan on an iPhone 6 without a SIM card that is set up like an iPod Touch.

An article about this issue which may be of interest: 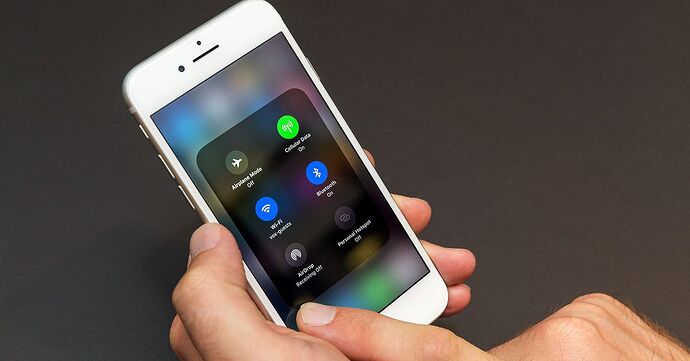 FCC chairman Ajit Pai wants Apple to turn on the FM radio that’s hidden inside of every iPhone. In a statement today, he asked that Apple "reconsider its position, given the devastation wrought by...

Although the chips in an iPhone may have FM radio reception capability, it requires more than a chip to have an FM radio receiver. You also need software and a proper antenna.

Apple could, of course, ship the necessary software, but it would probably require a hardware update to get the necessary antenna.

Cellular modems use a variety of frequencies between 600 and 6000 MHz (plus some in the tens-of-GHz bands for millimeter wave 5G). FM broadcast radio, on the other hand, runs at much lower frequencies (87-108 MHz). And AM radio even lower than that (530-1700 kHz in the US). These require very different kinds of antennae.

FM radios that don’t have an aerial antenna typically use a device’s headphone cord as the FM antenna. AM receivers typically use a bar antenna (wire wound around a metal core), which tends to be large and bulky - not appropriate for a modern hand-held device.

The iPod nano could get away with an FM receiver because it had no speakers. Users would always have headphones attached, so the wire was available for use as antenna. It’s worth noting that it did not include AM radio support.

For an iPhone to receive FM radio, it would also need a fairly large antenna. Without headphones connected, there would need to be something else, like a wire hanging out the back or an old-fashioned telescoping antenna. Something Apple would probably not want to implement unless forced to do so by law. I also suspect that most people would not want to buy such a device.

I suppose Apple could use the shield of a Lightening cable as an FM antenna, but that would be really awkward if the device isn’t connected to something (like a computer or a pair of wired headphones) at the time.

Live FM radio is “free-to-air” so there is not much incentive for Apple to support it, given its business model of paid streaming services.

The 2019 Australian bushfires highlighted the need for people to listen to emergency radio broadcasts when the mobile phone, electricity and internet networks were destroyed. These days people in risky areas need to keep an old-fashioned radio receiver available with fresh batteries (at least cars still have a radio!).

BTW I am currently watching free-to-air TV via my Apple TV which has the Channels app that accesses an HDHomerun tuner on my home network. It also picks up local digital radio stations. I prefer to not have to rely on internet streaming for these services.

There are apps for the iPhone & iPad to play content from the HDHomerun tuner but, of course, that means being connected to the same network.

Griffin used to market a portable FM tuner for older iPhones:
How to Turn Your iPhone into a Portable AM/FM Radio | | InformIT

Looks interesting, but pointless. From what I’ve been able to figure out (from the user’s guide page), it looks like a standalone radio tuner that you can control with an app on your phone. You even have to plug your headphones into it.

Personally, I think you’d be better off buying a pocket FM radio device and use it without the phone. Which is why (I assume) Griffin stopped making them.

Government Emergency Alerts are a default on iPhones in the US. In NY State, we get dangerous weather and missing persons alerts every so often. They can be disabled in Settings.

Yes, it’s the same in Australia. But the emergency messages depend on cell (mobile) phone reception being available. This is not always the case in disaster areas.
IN 2019/20 our public broadcaster - the ABC - was commended for its radio service alerting cut-off towns to approaching bushfires.

Thanks for the input. I vaguely remember the Griffin tuner, but yes, it looks like it would be a clunky addition and if I’m going to be buying hardware, I may as well get a cheap MP3 player with a tuner built in. Less expensive to replace should I (or when I) drop it.

In New York City we found out about this the hard way on 9/11. The landmark Verizon Building that was built at the turn of the 20th century and located right next to the Twin Towers, was very severely damaged, and cell and landline service was knocked out for days. This had global repercussions as it controlled systems used by the New York Stock Exchange, along with the NYC Police Department HQ and Fire Department Command Center, and other government offices. My husband and I were glad we had an old transistor radio as our cable and landline phone service were messed up too.

I think that streams the station over the internet, but he is asking about when he is out and about with no cell data, no wifi. Have you tried that scenario?

I think that streams the station over the internet, but he is asking about when he is out and about with no cell data, no wifi. Have you tried that scenario?

No, the last few versions of the iPod Nano had a radio that used the earbuds as an antenna. I still have my Nano sitting around, it definitely can receive FM radio stations. I don’t think there was ever a version of the Nano that had WiFi (so, no internet connections.)

A guide to using the Nano here:
https://ipod-nano.helpnox.com/en-us/ipod-nano-user-guide/chapter-6-fm-radio/tuning-the-fm-radio/

Apparently several generations of the Nano had this feature

Well, this has been very helpful. Turns out my wife has one of the Nanos with the FM tuner, but it doesn’t support a function she needs for her audiobooks. She was going to buy a new iPod Touch. Instead, we’ll swap and everyone ends up happy. Well, except maybe for SanDisk because I won’t be buying their MP3 player and Apple because we don’t need the new ipod. Thanks everyone – I’d say the ROI on my membership in this group has just increased.