We’ve resubscribed several hundred TidBITS readers who were inexplicably unsubscribed several months ago, and on a completely different topic, Adam shares a tip on how to run Monterey on a Mac that doesn’t support it.

I’ve used VMWare Fusion to run unsupported versions of macOS a number of times in the past, both newer and older versions. For example, I have a Snow Leopard VM I still use occasionally running on an iMac released 4.5 years after Snow Leopard support ended, and I have a Mojave VM on an old laptop (too old for Mojave) I use the few times I need a laptop. I also use Fusion to run versions of macOS that I could run, but don’t want to. My iMac is running Mojave, and although it’s new enough to run Monterey, I don’t want to upgrade yet, so I have a Monterey VM that lets me run the few things I want to run that won’t run on Mojave (with this year’s TurboTax being a prime example.)

It will be worth it. Using a VM is really only going to work for some limited programs/tasks with older computers when you’re emulating a newer version of OS. But things like email and web surfing work fine in Monterey in a VM as I discussed in another thread. The Music app seems fine also but I like older iTunes versions so I don’t use Music much. Since my 2012 Mini is about eight years old as I purchased it in 2014, I will probably upgrade soon enough but for most things, it is fine.

Regarding VMWare Fusion 12 (free with account), the requirements are interesting:

Hardware
All Intel-based Macs launched in 2012* or later are supported*,* as well as:

The 2010 MacPro is hardware supported but since they cannot run anything (without a hack) beyond Mojave they are not OS supported.

My brother has an iMac 2015 running Catalina and cannot but upgraded to Big Sur.

His TurboTax program issued a warning that next year’s 2022 version (for a 2021 tax return) will not run on this machine.

These VMs are surprisingly usable on this hardware, but really only for testing purposes and for exploring basic Big Sur/Monterey features. They run things like Safari and BBEdit reasonably well, but they’re just a little too slow on this hardware for normal, everyday use.

However, if you your Mac has a traditional spinning hard drive, I wouldn’t even try to virtualize Big Sur or Monterey, especially on older hardware.

FWIW, Windows 10 works very well on this particular machine, both as a VM and via Boot Camp.

My brother has an iMac 2015 running Catalina and cannot but upgraded to Big Sur.

His TurboTax program issued a warning that next year’s 2022 version (for a 2021 tax return) will not run on this machine.

The warning is about Catalina, not his machine version. His iMac is fully capable of running Big Sur (according to MacTracker), so all he needs to do is upgrade macOS by this time next year.

Just to be clear, the free product is called VMware Fusion Player which mine currently is at 12.1.0 and this is a different product from the previous ones. There is some confusion on their help boards regarding “upgrades” from other versions such as for those who have Mojave and can’t run this free product.

The free product is VMware Fusion Player and is at 12.1.0 on my mac so whether it is any better than the VMware Fusion 11.5.7 version, I can’t say with certainty although I have tried the one you’re using and it worked fairly well under Mojave. SSD’s are certainly better but spinning drives can be used as long as you don’t mind the slowness with some programs.

I am running VMWare Fusion 7.1.3 (and have a license for v8; never installed) and it works just fine in Mojave – so I’ll keep using that. My only VMs are Snow Leopard Server and Windows XP Pro.

I recall trying some older versions in the past using a trial period but things ran too slow but at that time, I didn’t have any SSD’s so that was a main issue. With Windows and Boot Camp, it was similar. However, the free version works well under Catalina to run an old Windows 7 VM which I rarely use and the Monterey VM so for me, it works fine.

I still have my Mojave partition so I just boot into it if needed as well as some other old OS versions.

I’m not unsubscribed, but I did get a notice this morning when I visited the site (after seeing no email since last night, which is unusual) that you cannot reach my email address. 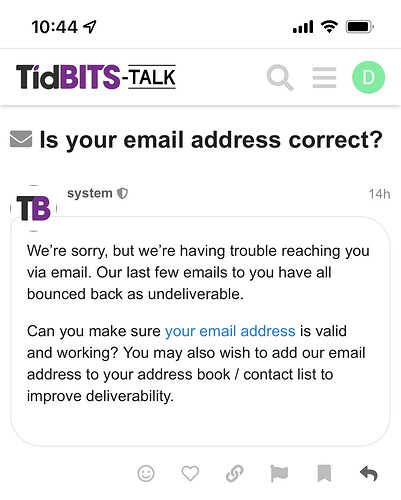 My email address has definitely not changed (it is a gmail address) and I’m receiving mail just fine. Is this some sort of bug on your end?

I did get a notice this morning when I visited the site (after seeing no email since last night, which is unusual) that you cannot reach my email address.

I got the same message from the TidBITS-Talk system. My delivery is also to Google-hosted email but the address is a custom domain on a G Suite account (it’s not the “true” email address for the account, but an alias).

By the way, after posting the above I was able to fix this by changing my email address to one with a”+tidbits” after my username and before the @gmail dot com.

Thanks, guys! I’m not sure what’s happening yet, but I’ll see if I can figure it out. Some days I really hate email.

Alright, I don’t know what happened, but a whole lot of primarily Gmail users bounced. I’ve reset everyone who did, so we’ll see if it happens again.

I send out a neighborhood newsletter using a Mac bulk email program and I noticed several months ago that some email servers on .gov and .edu domains are using some kind of link checking program which shows that they have clicked on every link in the email. Including unsubscribe links! Perhaps this is also what is happening with your emails.

Interesting. This seems to be the case in some institutions where external URLs are redirected through some form of filters (e.g. TrendMicro) to detect phishing attempts.

There were some discussions online about accidental unsubscribes. Some suggested implementing a manual click-to-unsubscribe at a webpage instead of one-click unsubscribe.

Microsoft mentions activation of links in a sandbox environment for threat-detection purposes.

Attachments or links in the email are opened inside a sandbox environment where the content is analyzed by our machine learning models that check for malicious signals and apply deep link inspection, allowing for zero-day malicious attachments and links to be detected

Thanks for that, @chengengaun. I hadn’t heard about this before, but I could see it accounting for our weird spate of unsubscribes. Perhaps there was something else in that issue that elevated it in the mind of some anti-spam checker. Although our visible Unsubscribe link actually takes people to their profile, there is a List-Unsubscribe header that Sendy adds for instant unsubscribes that don’t go back through WordPress.