In the ongoing saga of things rattling around in Adam Engst’s head that don’t merit their own articles, Adam shares the fact of Apple’s new temporary iCloud Backup storage, passes on a story about Screen Time settings inexplicably changing, talks about moving TidBITS to a new virtual private server, and notes an upgrade to the TidBITS News app.

By default, TidBITS News displays a spinner as it loads articles if they don’t appear instantly. I found that a little disconcerting when the wait was under a second anyway, so Matt decided to add a setting for those who, like me, want to turn it off. Find it in Settings > TidBITS News.

@matt3 I’ve never used the app, so this may already be the case, but in addition to having an app-specific setting, the News app should also honor the operating system’s Reduce Motion setting in Accessibility > Motion. Motion in animations can cause some people to feel sick in a variety of ways. If there are other motion animations in the app, they might warrant an alternative as well. 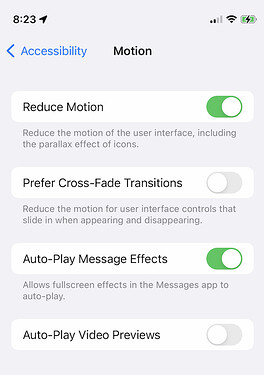 iOS added the setting for apps in 2014 and the ability for websites to know about the state of the setting was added to Safari in 2017. Responsive Design for Motion is a good article, with examples, about implementing alternatives on the web, I think it also links to resources for native app implementations.

It isn’t something the app has to “honor”, nor can it (there is no visible setting or property that the program can check); the operating system is responsible.

An OS can’t possibly know all the possible ways an app could create the appearance of motion, that’s why properties like isReduceMotionEnabled and reduceMotionStatusDidChangeNotification exist.

If this app’s spinner is an Apple-provided component that has state detection and a non-motion appearance built-in, that would be great.

Aha, didn’t know that! I’ll definitely look into it. Thanks! I particularly like the idea that we could make the spinner depend directly on this.

@ace I love what I call the “quick and dirty” tidbits. Absolutely keep them coming, indeed.

We use Linode for our servers. I’m sure you can get a dedicated CPU instance with the latest Ubuntu, etc. for considerably less than that for that amount of storage.

I am liking LittleBITS.

We used Linode long ago for TidBITS stuff. We had no complaints about their reliability or pricing, as I remember, but they don’t basically anything for you. In contrast, Arcustech support is very hands-on and provides a lot of help with configuration and management.