Note: version 5.0 requires Big Sur. They also shipped an upgrade to v4.6 for older macOS versions. I bought the upgrade even though I am not running Big Sur. The serial for 5.0 also works with older versions, so you can install the serial now and upgrade later.

Yes, @agen, I would describe this note as quite misleading. If you’re not running Big Sur there is no news here at all, as version 5.0 is not for you. And if you upgrade, the upgrade is very unlikely to be “free” as stated in the note; that’s only for people who bought version 4 extremely recently.

The actual Watchlist item (which I hope everyone is reading rather than relying on the sentence-fragment summary) is extremely clear about how Big Sur is required:

And it clearly says that upgrades aren’t free as well in the body of the text:

Little Snitch 4 licensees can upgrade to version 5 at a reduced price, which you can get by visiting this Objective Development order page.

I’ve updated the parentheticals that summarize this information, which @agen forgot to change and @jcenters missed in his edit pass. Wet noodle flagellation will commence forthwith!

I think the bigger news is that Little Snitch no longer works completely. In Big Sur you can no longer block some traffic from Apple apps. This is Apple’s decision and marks yet another step Apple has taken to remove control of computers from the owners of those computers.

I’d say that we still have complete control of the computer, but while using Apple’s operatiing system we have to follow Apple’s decision. Sounds about reasonable to me.
cheers
–e.

It doesn’t sound reasonable to me.

This would come as a big surprise to Adobe, Microsoft, and especially to many, many thousands of other highly successful app developers that depend on Apple hardware to stay in business.

If this were true they would be charging for Photos, Photo Library and Photo Booth, the iWork Suite, iMovie, Shortcuts, Health, Safari, Garage Band, Voice Memos, Wallet, the new Translate, FaceTime, the free iCloud Drive, freebie News, Podcasts, iTunes and more. Apple actually developed Photos, Aperture, iMovie and iWork because Adobe and Microsoft announced they were going to cease development of Photoshop and Elements, as MS threatened to do for Office for the Mac.

I have no problem with this, as do all my non TidBITS Talker friends, family and almost all co-workers.

Freedom of speech is guaranteed by the first amendment to the US Constitution, and is protected in many other countries as well. Android, Windows, etc. are doing exactly what Apple is.

This would come as a big surprise to Adobe…

The software under discussion was the operating system.

I have no problem with this,

Which is fine for you to have that opinion. However, you are simply acknowledging my original statement.

Indeed. But that does not mean FB or Twitter must let you say whatever you want on their sites. Nor does it mean Apple needs to with their software. If people are fine with Apple having the ability to specify what you can use their software for, then it is up to Apple to decide whether or not your speech is acceptable on their software. All they have to do is update the terms of their license to prohibit whatever speech they don’t like.

I should add that I don’t think Apple is about to do this. I’m simply showing why it’s a terrible idea to advocate that we are only allowed to do with our computers or phones whatever the manufacturer thinks is acceptable.

I think the bigger news is that Little Snitch no longer works completely.

We covered this in

TripMode developer David Dudok de Wit has discovered that Apple prevents application-level firewalls from monitoring or even measuring traffic from over 50 Apple apps and processes. It’s yet another way that Apple blocks developers from providing...

As I said there:

I don’t believe this move shows any grand conspiracy to undermine TripMode or Little Snitch. I suspect it’s just another change that Apple has made—perhaps in the name of overall security, perhaps merely with no thought to what developers and users want—that has an unintended and undesirable consequence.

Apple’s desire to switch from a hardware sales company to a services revenue company means that they are incentivized to prevent you from doing things you used to be able to do and then charge you on a monthly basis to be able to do it.

I’ll bet I’m not alone in eagerly anticipating announcements of new ARM Macs at tomorrow’s “One More Thing.” They probably wouldn’t have considered dumping Intel, or even rolling their own ARM chips for mobile devices if they weren’t 100% committed to hardware sales. They would’nt be releasing new Mac, Watch, iPhone, iPad, AirPod or headphone models, Apple TV or Home Pod, which are upgraded very regularly, if they didn’t anticipate revenue growth from them. They wouldn’t have invested so much in they would have long ago switched back to licensing clones, a past decision that came perilously close to killing off Apple altogether.

Apple’s Services revenue is massively dwarfed by hardware sales. There’s an informative Q4 2020 analysis here. And keep in mind that iPhone sales did do well as the 12 models were released uncharacteristicly late, until after the quarter ended: 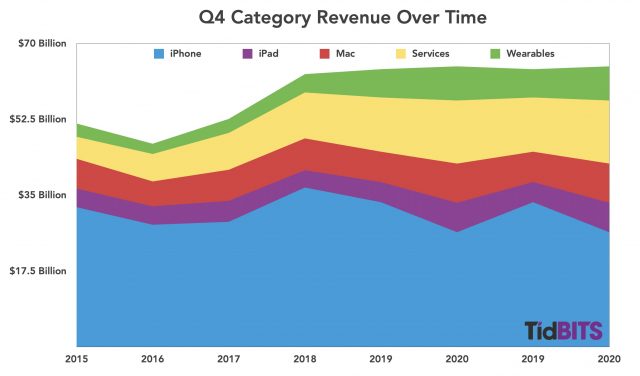 In this pandemic year, Apple’s Q4 performance saw reduced profits but steady revenue compared to the same quarter last year, with iPhone sales drops mitigated by increased Mac and iPad sales as well as continuing growth in Apple’s services and...

Services were developed by Steve Jobs to lock people in to Apple hardware sales. Would iPod have become the instant, game changing success it was without iTunes? Would Apple have survived when Adobe, Macromedia and other companies announced they would cease development for Macs? And Microsoft drastically slowing development of Office products? (It’s widely thought they would have stopped development altogether for Macs if they weren’t embroiled in a US antitrust suit, and Apple was also regularly and repeatedly hauling them into court for a bunch of lawsuits).

Alright, we’re straying far from the topic of Little Snitch 5.0. Let’s try to keep it focused.