I noticed something odd about my iPhone 13 pro battery. I got it 10 months ago and I checked last month and the battery health was at 98%. I thought that was great. But I checked today and in one month it went down to 92%. Isn’t that a little odd? I keep my battery settings on optimize charging, and I only charge wireless. I do notice that rather than charging to 80% as described it usually charges up to 100%.

There was a change to iOS that was meant to make the battery life calculation more accurate, but I wouldn’t think it would make that degree of difference. 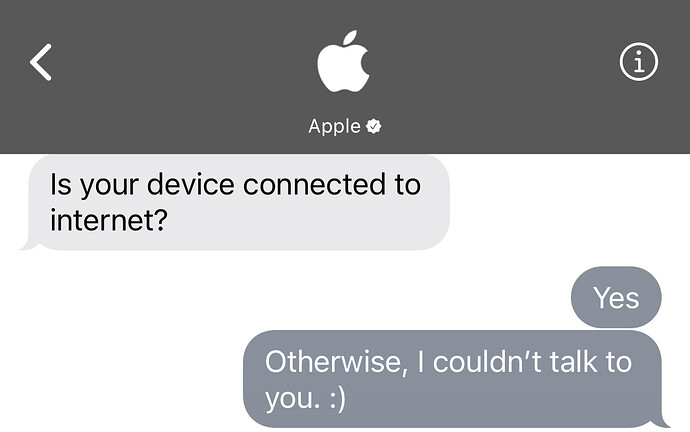 Well, you could have been chatting from another device.

I’ve always had a feeling that it’s bad to do a lot of wireless charging. It’s inefficient, it generates heat because of the inefficiency - and batteries don’t like heat (or cold). And your post convinces me that wired charging is the way to go.

And here I’d always been thinking that wireless charging is safest because (1) there is no physical connection to wear down and (2) the power used is less.

Anyway, after a long time chatting with Apple Support (including the first person losing their connection) the temporary conclusion was that even with optimized battery charging turned on and all their other recommended power efficiency settings turned on (e.g. auto-brightness), that the downgrade is due to the fact that I always rest my iPhone when not in use on a wireless charger - either on my desk when at work or by my bed at night. So there is typically not much discharge.

But the one thing that remains a complete mystery is why it only went down to 98% the first 9 months and then suddenly dropped to 92% in the last month.

Their recommendation for now is to let the battery drop to below 30% for 48-72 hours before charging unless I need to go out for an extended period of time. When I finished my call with them last night it was down to 90%. Overnight it self-drained (I guess background tasks) to 79%. Currently it’s at 68% - and I’ve barely touched it since last night.

At this rate it will probably get below 30% before lunch. It’s currently 6:15 am here.

I’m not sure what to do going forward. I have an overseas trip in April and I’d hate to mess with a battery replacement just before or during my trip.

Of course I have AppleCare+.

I really don’t get why the “optimized battery charging” setting doesn’t just take care of all this automatically.

Well, you could have been chatting from another device.

Yes – although in my case they always seem surprised when I tell them that I am not calling from my iPhone.

(1) there is no physical connection to wear down and (2) the power used is less.

Wireless charging uses more power. It is inherently inefficient compared to wired charging because you’re exciting Eddy currents (and with it ohmic losses) in far more than just the secondary winding (charging loop). You’re basically trading extra power for convenience. And because more is heat is involved (recall those ohmic losses), the battery, if anything, will suffer more.

Wireless charging uses more power. It is inherently inefficient compared to wired charging because you’re exciting Eddy currents (and with it ohmic losses) in far more than just the secondary winding (charging loop). You’re basically trading extra power for convenience. And because more is heat is involved (recall those ohmic losses), the battery, if anything, will suffer more.

Interesting. And here I thought I’d been treating my new iPhone 13 Pro as gently as possible the whole time. I even got two wireless chargers - so I could keep one on my desk and one beside my bed. I probably should just have a wired charger on my desk and nothing by my bed.

I’d really like to get a new battery and start over rather than wait until it drops to 80% but I guess at 92% it’s too soon.

I just went back into the support chat and asked Apple. Their reply was, “Technically, it doesn’t matter if you charge the device via wired or wireless Doug.”

Of course these support chat people are not renowned for their expertise on details.

The biggest mystery I’m trying to solve is what happened this month. The first 9 months battery health went from 100% to 98%. That’s great. But then in just the last month it dropped another 6% to 92%. Isn’t that strange? No settings were changed. Could it be just that iOS 15 wasn’t reporting correctly and with iOS 16 the metrics used are different?

Now Apple support is saying there is no real difference depending on when I decide to charge it. Sigh.

Maybe I just shouldn’t worry about it and just get batteries replaced by Apple under AppleCare+ whenever the time comes. I intend to remain on AppleCare+ for as long as I own this iPhone.

Maybe I just shouldn’t worry about it and just get batteries replaced by Apple under AppleCare+ whenever the time comes.

Maybe I just shouldn’t worry about it and just get batteries replaced by Apple under AppleCare+ whenever the time comes.

AppleCare will only make a difference if there is a fault with the battery, which Apple usually measures by their statement that a battery should have 80% capacity or more with fewer than 500 charging cycles. (That seems to be the rule of thumb, but there are diagnostics that Apple runs to check the charging system.) Otherwise you will pay for a $79 (in the US) fee for a battery replacement on a 13 Pro. (I’d strongly suggest using Apple or an authorized reseller for a replacement battery.)

It’s probably a good idea to wait for a replacement until the maximum capacity is in the low 80s at the highest.

And, yes, Apple will say all they want about magsafe vs wired charging, but i don’t think it’s true myself. They definitely do not want to admit that magsafe has a negative effect on battery life since they actually sell magsafe charging devices. (It’s possible I’m wrong as well - I have no evidence to prove it. It just makes sense that a less efficient charging system that raises the temperature of the phone in the vicinity of the battery is probably worse on long-term battery health.)

Yes, I would wait until the battery is in the low-mid 80s before requesting a battery replacement. It was my experience with my iPhone X that they would offer a free replacement then. I’m not in a hurry at the moment. I just wanted to figure out what was going on.

And yes, I would only use Apple or their authorized repair center for a replacement battery.

I guess I can think about just connecting it to a lightning cable for charging. Any opinion about stopping the charging at night or all the time? I had been just leaving it on the wireless charger while working instead of just resting it on my desk. And it was another wireless charger all night next to my bed.

I wonder why the “optimized charging” setting doesn’t seem to do anything at all, like stop it from charging to prevent excess cycles. That’s how it seems to work on my MBP, which seems to keep it “on hold” at 80% since it’s plugged in all the time.

I wonder why the “optimized charging” setting doesn’t seem to do anything at all,

My understanding is that it’s designed to stop charging your phone at 80% as you charge based on your charging patterns; it tries to predict when you’ll have the phone plugged in for a long time and adjust the charge so that when you typically unplug the phone will be at 100%. For most people who charge while they are sleeping, it will hold the phone at 80% for several hours while you are sleeping and then starts charging up to 100% about two hours or so before you typically wake up. I definitely see this when I am at home and charging overnight.

I’m not sure that it works with qi or magsafe wireless charging though. I recall reading people who were using MagSafe complaining that the phone wouldn’t stop at 80% when optimized charging was introduced a few years ago.

You can see for yourself in the graph in settings / battery. There will be an obvious plateau at 80% while there is still a light green background to show that the phone was still charging.

If you don’t have a regular pattern of daily charging, optimized charging probably won’t do anything.

There is no plateau at 80% like on my Mac. My iPad Pro, also from last year, is the same, but it’s connected to a USB-C cable for charging of course. Maybe I should disconnect that sometimes as well. The battery level there shows 100% and green in the graph. And for some reason iPad OS doesn’t show you battery health. I wonder why not.

Anyway, I can go for super efficient battery lifetime saving efforts now. Or another thought is continue what I’m doing and get the battery capacity to drop enough by April so that I can get a new battery for free from Apple before my U.S. trip and then go for battery lifetime optimization efforts.

No need for a technical explanation. It should be intuitively obvious that converting electric power into a magnetic field, and then back to electric power for charging is going to be less efficient than just charging from the a power source without the conversion to/from magnetic fields.

And here I thought I’d been treating my new iPhone 13 Pro as gently as possible the whole time.

Charging-stress on the battery is primarily a function of how rapidly it charges, which is in turn a function of the power/current used to charge it.

If you want to put less stress on the battery by charging it more slowly, the easiest way is to use a lower capacity charger. If you use a basic 1A/5W charger (e.g. the cube Apple used to bundle with phones) instead of a 6A/30W charger, then the phone’s maximum charging speed with be throttled to 5W.

But I really wouldn’t worry about it. I think trying to play games in order to maximize battery life is ultimately going to be counterproductive, especially when iOS has its own battery charging controls. I just plug my phone in at night (using a 5W charger) and don’t normally recharge it at all during the day unless I do something that really drains it (like a lot of gaming). After about a year, my 13 mini is claiming 97% capacity, for whatever that’s worth. (I do have “Optimized Battery Charging” enabled).

I’d really like to get a new battery and start over rather than wait until it drops to 80% but I guess at 92% it’s too soon.

You can pay for an out-of-warranty replacement, but I wouldn’t bother. I wouldn’t pay any attention to the OS’s battery health number at all. When the battery can’t provide enough power to get through a normal day’s usage, then it’s time for a replacement. The OS’s number is really only meaningful if you want to try and convince Apple to replace it under warranty.

I notice that this inexpensive Motorola Moto g I bought a few months ago for some testing has put itself in a battery optimization mode of some kind and is limiting its charging. I guess I still wonder why my iPhone 13 Pro with charging optimization on doesn’t do the same thing. 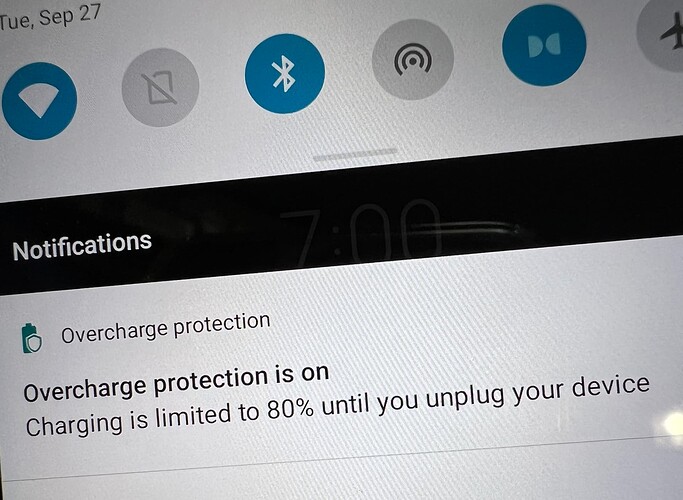