iPhone 13 Pro and photos of the moon

I really like night mode and macro mode on my iPhone 13 Pro. I’m a bit less thrilled by the 3X optical zoom out. It’s sort of “meh.”

One thing that is disappointing is I can’t get a photo of the full moon that’s anything but a blur. This morning, before moonset, the moon was nearly full, very large to the naked eye, and you could see features directly with your naked eye.

But no matter what I tried (1X, 3X, 15X digital, zooming in and tapping and hold to fix focus, etc.) I just ended up with a blurry ball of white.

Anybody have any suggestions about this? Or is it just impossible?

It’s a well-known optical illusion that the Moon appears larger near the horizon. Near the horizon or high in the sky, it subtends about half a degree. You’re not going to get a good photo just with the phone.

You can get a decent picture simply holding the phone up to the eyepiece of a telescope. That’s what I and some of my intro astronomy students have done. I find it was easier to get a good picture with older iPhones because the improvements made to the camera for low-light conditions paradoxically make it more difficult to get a good picture.

For night photography, especially when you are under heavy zoom, you need to lessen the need for stabilization by having the camera hold steady. If you physically starting the photo on the device (formerly known as opening the shutter), delay the start of the photo by using the timer (it’s on the additional setting line next to the exposure setting–scroll, if necessary, to see it.). Also, since it will be a long exposure, keep the camera as steady as possible. It’s best to use a tripod or monopod. Since you probably want the camera at an upward angle, the standard 2nd best option of standing the camera on a flat surface probably won’t work, So, in the absence of a tripod, you can increase the steadiness by anchoring your upper arms to your body, only allowing your arms below your elbow any potential freedom of movement.

Isn’t the moon considered an object in bright sunlight, and needs to be exposed accordingly?

Yes, the Moon is in direct sunlight, and it must be exposed accordingly. This is counterintuitive. Since it’s dark out, it seems like you need a long exposure. But that will give you a much over-exposed blob rather than a detailed image of the Moon. Maybe that’s part of the problem.

I don’t have an iPhone, and I don’t know what controls the default camera app gives for exposure. The exposure needs to be the same as it would be in broad daylight. Because that’s where the face of the Moon is.

(Most people will think that because the Moon is far away, it must be fainter. I won’t go into the math, but that intuition is wrong.)

Interesting responses. I’ll try some exposure experiments next time. Thanks.

I believe the iPhone has an auto focus problem in its software that is all over the internet. Search on Google for IPhone Pro Max auto focus problem. You will find many articles written by unhappy Apple iPhone users.

I have an iPhone 12 Pro Max that won’t focus properly.

Keep in mind there is no manual focus adjustment on an iPhone and no Apple approved test of the auto focus function.

I had my iPhone on the floor using a timed shutter release. There is no way the blurry photo is a result of camera shake.

The shot was aimed at the ceiling and I pushed my finger on the screen to focus and the yellow ring was there. I was using the wide angle lens.

See for yourself what I got of a ceiling 25 feet overhead. This is why your moon shot is a blurry photo.

Apple has refused to acknowledge the problem or announce a fix. My friend with a $350 Sony cellphone camera gets better photos than my $1,400 iPhone. I have my photo and his that he sent me to prove my assertion that something is very wrong with the Apple camera software. 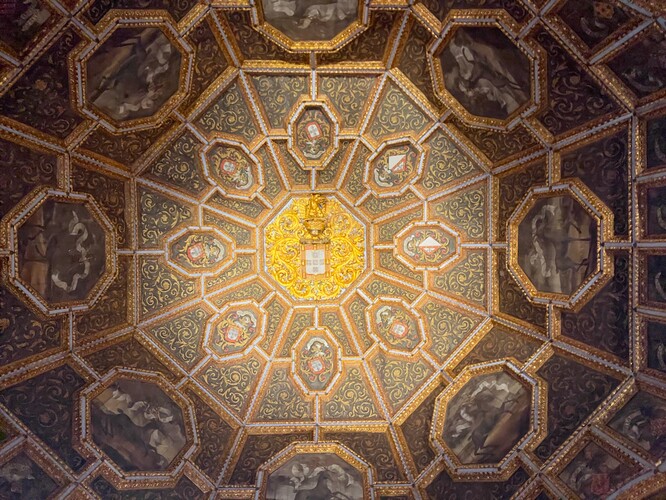 In addition to that, it seemed that with my iPhone X I could do the following, and at least get a better exposed moon with some features:

It’s (2) that doesn’t seem to be working as expected.

Yes, as far as autofocus goes, my old iPhone X worked well and better at focus that my iPhone 12. The 12 has higher resolution and the photos look better at a distance (like posted online) but printed or enlarged, the focus is not sharp.

In the 12 and 13, Apple increased the sensor size, which changed the optics of the old lenses. I am not certain how Apple can fix it if it is the actual physical optics of the device. Like the Hubble Telescope, the slightest change to the optical path results in blurry photographs.

Apple would literally need to replace every iPhone 12 and 13 they have ever sold. I am certain that Apple is in total denial mode presently and hunting desperately for a software solution.

I do not know what to do about this situation. When I get back home I will do a side by side X vs 12 of a tripod stabilized shot of a physical focus card like they use in motion picture cameras shot at difference distances from camera to subject. I am determined to prove this defect exists. 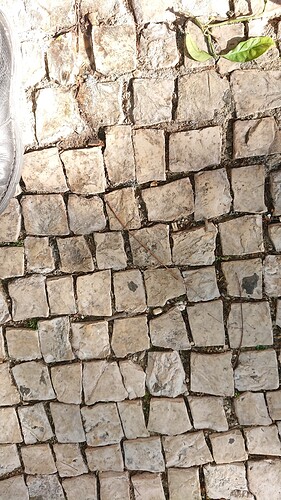 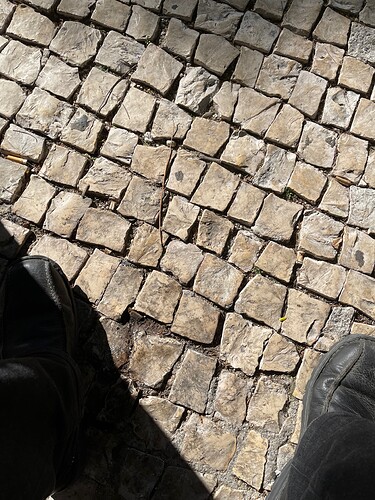 Zoom into that stick on the stones. In the Sony it is sharp, red, and you can seed the buds of new growth. On the iPhone it is blurry. 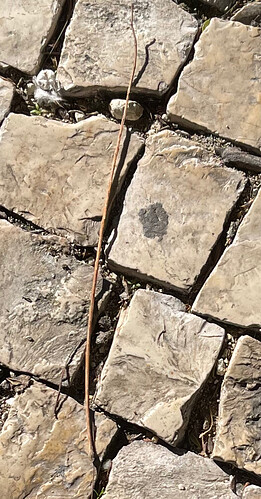 iPhone 12 Pro Max. Edges of the stones and stick are not sharp. 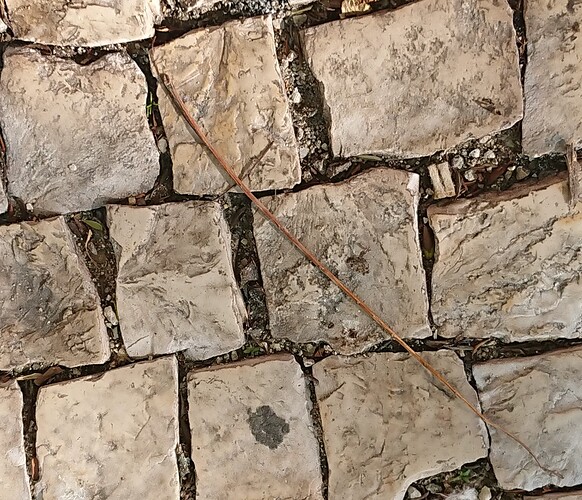 Same subject, same distance shot on $360 Sony, Look at the edges of the black spot on one of the stones.

Can you see the difference??

Possibly this is the fault of the Camera app. Has anyone tried one of the many third-party apps, e.g., ProCam, which offer RAW and manual controls?

Yes, tested on both ProCamera and Apple’s native camera. The soft focus problem exists regardless of the camera software.

The issue I am convinced lies in the physical camera and lens or in the hidden camera software. It is embeded into tbe design of the device and is a defect.

Following up on my post yesterday about exposure for Moon photography, today’s (Jan 22) Astronony Picture of the Day illustrates the point.

A different astronomy and space science related image is featured each day, along with a brief explanation.

The Moon and the city on the hill are comparable in brightness. To the extent the the city is slightly brighter, it’s almost certainly because the buildings have a higher albedo (brighter color) than the lunar surface.

The ‘sunny 16 rule’ covers the proper exposure for the moon quite well. It’s a rule of thumb for selecting the right exposure for outside on a sunny day when there’s no light meter available. This comes from the film days–since modern sensors have somewhat different characteristics, it’s a little less universal now. But it’s always a good starting point, and since you can see the results right away, it’s easy to adjust as you go along.

Set the aperture to f16, ISO to whatever you want or is available, then set the shutter speed to 1/ISO. So, if you have an ISO of 100, shutter speed will be 1/100 sec. if you want a faster shutter speed, use a larger aperture or higher ISO. For the moon on an iPhone 13 Pro using its ‘telephoto’ lens (a very short 77mm tele) you’d want a shutter speed of 1/200 sec or faster unless you’re using a tripod. Phones are very hard to hold steady compared to dSLRs, partly low mass/inertia, but mostly the baby diaper stance.

Apple’s camera app doesn’t let you see the settings, let alone actually set them, and it’s going to be squirrelly at best not just for exposure but for focus because the moon is such a tiny part of the frame and it’s extremely bright compared to all of the darkness surrounding it. Something like Procam lets you do manual exposure and manual focus with focus peaking (show the parts in focus in red) and will do as well a phone can. First set it to its longest distance focus (they don’t seem to have an explicit infinity focus setting), then play with the exposure. But unless you want the moon as part of a large landscape, you need a pretty long real telephoto on a regular camera (~300-1000+mm depending on sensor size) or a small telescope you can mount the phone to (you’ll still want a third party camera app).

I googled this after trying to imagine what you meant, but didn’t find anything enlightening. Can you say more? Something is missing from my understanding of cellphone photography…

Yeah, I guess it’s not that common a term; it shows up occasionally in comments at some photography blogs. But I don’t know of a better concise description. Imagine holding a dirty baby diaper - you presumably want it well away from your body which is inherently unstable.

A camera with a viewfinder is held against the face, near or at center of gravity, and well supported by one hand beneath it or the lens with the other hand free to work the controls. Even that’s often not stable enough. But a camera with only a display has to be held away from the body (further and further as presbyopia increases, sigh…) making everything awkward. To keep focus, you either need to be pretty strong throughout to hold still enough, a quite high shutter speed, or much better a firm support like the top of a sturdy fence, holding it against a wall, or a tripod.

I’ve found (with my Kodak point-and-shoot digital), that the strap works wonders here.

Put the strap over your neck and hold the camera at arm’s length, so the strap is taught. This makes it easier to hold it steady in those situations where you can’t actually put the camera down on a surface.

There is still motion (nothing hand-held can ever be perfectly still), but the strap restricts the range of motion and every bit helps.

I have been looking at the 3x zoom on my new iPhone 12 Pro. I took some pictures where there was strong contrast, one example being dark text on a near-white background. If I enlarge that picture I find that the camera has not produced a crisp edge to the text but has introduced a kind of transitional border around each letter, essentially an artefact rather than a representation of what’s really there. This makes the enlargement look blurry despite the high resolution of the photo. I suppose that this may be ‘normal’, but I wonder if there is any way of preventing this kind of artefact appearing.

Sebastiaan de With, the developer of the camera app, Halide, has just published a deep analysis of the iPhone 13 Pro camera. The last major section of the piece is a discussion of the telephoto lens including a discussion of why the Apple telephoto lens has issues with sharpness and how the change to a 3x lens has made those issues worse. He also discusses how Apple’s attempts to compensate for issues can often lead to strange results