So – I’ve noticed something unusual with my iPad over the last month or so. Generally, I plug it in to recharge overnight. I take it with me to work, but often don’t need to use it there and I don’t really pull it out and start using it until I’m home in the evening. Historically, when I opened it in the evening the battery level would be around 98-99%, which is reasonable given that it’s been untouched in its case all day.

Lately, though–I believe since the iPadOS 13 upgrade–when I pull it out in the evening the battery level is in the 65%-70% range. I have no idea what it’s doing – if I go to Battery… Settings, it shows almost no screen time and doesn’t show any app as being responsible for my battery usage: 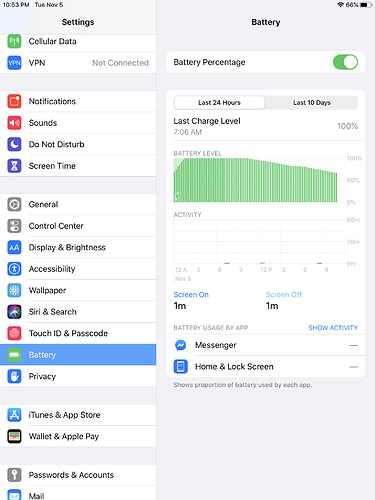 I shut off “Hey Siri”, in case something about the active listening was responsible, and it made no difference. I have restarted the device a few times, in addition to the restarts when I’ve installed updates. No luck–the idle machine in its case is still burning through battery at a reasonably steady pace every day. In the past under iOS I’ve had occasional problems with a mail account burning through my battery, but in that situation Mail showed up as the culprit in Battery Info.

This is a 9.7" iPad Pro (the first generation of smaller iPad Pro), currently running iPadOS 13.2.2.

I have been having the same problem and have 20% in the morning. If you touch the graph along the horizontal axis, time, it will show you what app is using the power. For some reason, Music was sucking up the power last night. If I put it into Airplane Mode, it stays stable.

I am hoping the recent (as of the last 24 hours) update will fix this.

You have to wait awhile to see what apps are using energy. For some reason it seems to need to go through some log entries and add them all up before it can display them from high to low.

You’ll probably have to go through the list of apps that are allowed to run in background, disabling any that don’t need to be kept constantly up-to-date or notify you of something specific. I’ve seen them all re-enabled after some updates.

The battery drain is a common issue with phones after an update (well, it is with mine anyway).

I have NOT updated my SE yet and I’ve been getting an incredible drain for a week now.

“If you touch the graph along the horizontal axis, time, it will show you what app is using the power.”

For almost every hour in the graph, it says, e.g. “Usage by app is not available for 3PM-4PM”.

“You have to wait awhile to see what apps are using energy. For some reason it seems to need to go through some log entries and add them all up before it can display them from high to low.”

I gave it plenty of time, and it didn’t come up with any apps. As far as I can tell, there’s no particular app it thinks is running most of the time.

I updated the OS this morning–we’ll see if that makes the difference. And I’ll try Airplane Mode to see if it’s somehow doing something network related that will stop when it can’t connect to anything.

Airplane mode is a good troubleshooting step, and if that prevents the problem, you might want to verify that it can connect to a Wi-Fi network at work.

Also, what about something in Settings > General > Background App Refresh? Try turning that off too, perhaps.

Have those in the know seen this being reported in general with system 13? I thought it was supposed to improve battery management?

I would actually also claim my SE has been draining its battery faster since I updated to iOS 13.