Having used Apple products since 1985, I won’t leave Apple today but I thought about it.

I got tired of the red badge glaring at me, so I updated over the weekend. Two major peeves so far.

When I realized, after 2 days, that ALL my incoming calls were going to voicemail, I realized I could set DND to start at 3:00am and turn off at 3:02 am. STUPID STUPID STUPID.

Not since, oh, was it Mac 3.2? have I had such a negative experience with an update. I’m waiting scared for what comes next.

They introduced something called Focus

Focus was really introduced with iOS 15. It’s over one year old now, and was an extension to Do Not Disturb. It’s been enhanced with iOS 16.

You can set it to never turn on a schedule at all, which is what it sounds as if you want. Settings / Focus / Do Not Disturb. Tap the schedule you created, tap “Delete Schedule”. Now it will only turn on when you turn it on manually.

Once you’ve removed the schedule, you can pull up the control center (drag down from the upper-right corner or up from the bottom of the screen, depending on which model phone you have). Note the “Focus” button: 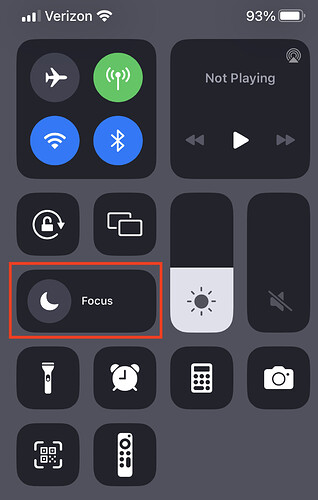 If you tap the left side of that button, you will toggle the Focus mode between off and the last-used mode (in this example, “Do Not Disturb”): 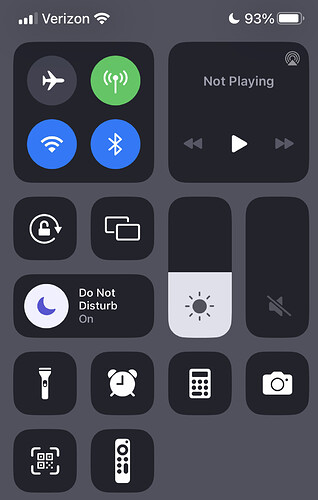 If you tap the right-side of that button, you can select other Focus modes and create new modes, if you don’t like any of the Apple-defined modes: 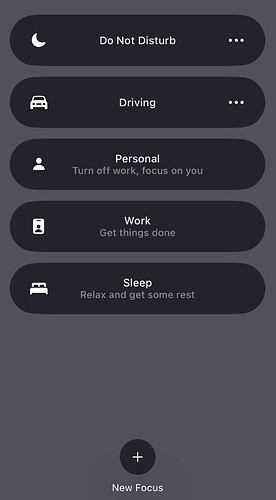 See also: Use Focus on your iPhone or iPad - Apple Support

Not since, oh, was it Mac 3.2? have I had such a negative experience with an update.

Though I share your pain about 3.2, yours is not the worst experience with 16.1.1: Apple restricted AirDrop in China before widespread protests broke out

‘Apple released a new version of its mobile operating system, iOS 16.1.1, to customers worldwide. Rather than listing new features, as it often does, the company simply said, “This update includes bug fixes and security updates and is recommended for all users.”
‘Hidden in the update was a change that only applies to iPhones sold in mainland China: AirDrop can only be set to receive messages from everyone for 10 minutes, before switching off. There’s no longer a way to keep the “everyone” setting on permanently on Chinese iPhones.’

I understand the need to comply with even unjust laws, but covering up its actions is a different matter. I have previously flamed my former employer here (‘The Era of “Update Automatically” is Over: A Rant’), but this is an ethical breach, not just laziness, indiscipline, or haste.

Though I share your pain about 3.2, yours is not the worst experience with 16.1.1: Apple restricted AirDrop in China before widespread protests broke out

Honestly, this should be, and should have been, the default for everyone.

When you get airdropped a photo, a thumbnail shows up on your screen asking to accept it.

Honestly, this should be, and should have been, the default for everyone.

Personally, I have Contacts Only. But that’s a separate issue from removing the option completely for subjects of a brutal dictator because he wants Apple to stop them communicating with each other.

Personally, I have Contacts Only. But that’s a separate issue from removing the option completely for subjects of a brutal dictator because he wants Apple to stop them communicating with each other.

But it’s going to be worldwide soon? For everyone, isn’t it?

Yes. Apple to limit AirDrop 'everyone' setting to 10 minutes | Macworld

Again. It should have always been.

Nnnno, Doug. Apple should provide the ability to set to “Turn on for 10 minutes” as one of choices, but should have the option to set to “One day” as this would be useful not just for people under a dictatorship, but people at an outdoor festival or theme park who want to exchange photos or other data. This is what’s known as distributed storage, and protects documentation in a crisis from loss if one or more devices are lost, stolen, or destroyed by evildoers.

In this era, it is vitally important for technologists to think ahead of crisis scenarios, and provide settings which would be needed in such scenarios. We can’t think of everything, but we can certainly make tech serve us in situations just like those which have already occurred! For the unimaginative, those would include: mass event (concert, festival, Times Square—in a crisis/attack/police riot/people riot/stampede), demonstration, wildfire, hurricane, loss of power grid.

Manufacturers and software developers don’t always think of everything; witness the censorship complaints Apple received. In trying to protect children from predators, they blocked them from being able to document their own abuse. So Apple changed their censorship. In this case, I’m sure you can agree Apple needs to make sure they don’t block people from documenting more public attacks!

I find a better way to deal with the red badge is to have a wallpaper that is red in that exact spot. Took some doing, well worth it.

My reasons: 1. I am not ‘brave enough’ to install new updates when they are fresh, and 2. My perfectly serviceable macbook air won’t take Ventura, and getting ios and mac versions out of sync has burned me before (syncing music), so now I’m stuck on ios15 and mac monterey til whenever.