Curious, I used Disk Utility to get info; Disk Utility said that it was not a solid state disk. Apparently the iMac is accessing the disk just fine. Should I be worried? Thanks.

How is it formatted, APFS, HFS (MacOS Extended), etc.? I have three external 860 QVO’s (all APFS), that I acquired while running Mojave, with no issues (Monterey now).

What is your external case? Mine are a Sonnet Echo 14 and a RocketStor 5212.

Have you tried unmounting/remounting, or rebooting?

Sorry, obvious stuff, but it’s all I got.

The disk has most likely been tainted by a newer macOS APFS implementation. Did you plug it into a newer Mac? Or did you do anything regarding a newer version of macOS/APFS?

How is it formatted, APFS, HFS (MacOS Extended), etc.?

What is your external case?

Have you tried unmounting/remounting, or rebooting?

Unmounting and remounting, yes. Rebooting, no, but the notification appeared promptly after rebooting. (The user rebooted to perform a backup, connected the drive, and got the notification. And then proceeded with cloning to the drive.)

Did you plug it into a newer Mac?

Yes, but over a year ago and several times since then before this anomaly appeared. The physical device is used for clones (in different APFS containers) of three different computers and has been for many months.

Or did you do anything regarding a newer version of macOS/APFS?

Yes. Let me try to explain.

There are multiple drives (each with multiple APFS containers) that are used for clones of the three computers. Because the computers are not cloned sequentially, there is no pattern of use. What I mean is that D1 (drive 1) has clones of all three computers; as does D2, and so on. But it is not true that C2 (computer 2) and C3 are always cloned between consecutive clones of C1. C1 will cycle through the drives, as well C2 and C3, but at different rates.

The end result is that the drive in question cloned a Mac that had been updated from Mojave to Big Sur between the last two times that drive was used on the iMac. However, that drive had been used on another Mac that had been running Big Sur for over a year before this incident, with updates each time Apple released a new version.

Because the drive had been exposed to Big Sur multiple times and long before this incident, I question the assertion that exposure to a newer macOS APFS implementation caused the notification. And if it is true, then given the cycling of the drive among computers, wouldn’t it get tainted again if I reformatted it on Mojave?

Edited to add that I formatted a new Samsung T7 disk on the Mac that has been running Big Sur for over a year. When I connected that drive to the iMac, I did not get the warning.

Because the drive had been exposed to Big Sur multiple times and long before this incident, I question the assertion that exposure to a newer macOS APFS implementation caused the notification.

I only offer this hypothesis as I’ve seen this notification once myself, when my drive was tainted by a Big Sur beta.

And if it is true, then given the cycling of the drive among computers, wouldn’t it get tainted again if I reformatted it on Mojave?

Regardless of what triggered the notification, is it a problem to use the drive to clone the iMac?

The notification can be ignored. The container has properties that are not recognised by Mojave, but it is able to continue to use the filesystem. It depends how annoying you find the notification sdjo frequently it pops up. It would be useful to know what and how it is tainted but it’s not essential.

The notification can be ignored.

Just to pick a nit here. Assuming I am correctly understanding what you wrote:

A volume is a logical mountable file system (although macOS Big Sur and later makes this less clear by mounting the system and data volumes together as a group).

An APFS container is a disk partition that contains multiple volumes. You can’t mount a container, but you can mount the volumes it contains. In the case of APFS, all volumes that belong to the same container share the same pool of free space.

There are other examples of this concept beyond APFS.

For example, RAID systems take a bunch of physical volumes (typically individual drives), combines them into a single “logical volume group”, and then creates one or more volumes using the group’s storage.

These concepts are not Mac-specific either. Any non-trivial storage system, whether running on macOS, Linux, Windows or specialized industrial equipment will implement the concepts of physical volumes, logical volume groups and logical volumes in order to support the system’s goals (reliability, performance, redundancy, etc.)

Assuming I am correctly understanding what you wrote:

Probably I used the wrong words or misremembered what happened when I formatted the disk (or both). Here is a screenshot of the device from Disk Utility. 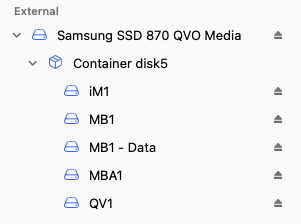 My recollection was that when I erased the new device, HFS appeared somewhere in the options, along with GUID. Just before I snapped the screenshot, I told Disk Utility to erase the device and saw that Disk Utility showed APFS for the device. Certainly everything below the device level is APFS.