I deleted the folders in ~/Library/Application Support/MobileSync/Backup/, I guess that's ok, right?

This is something I should have asked before doing it, but anyway…

I am running Big Sur on my MBP (late 2013) with 512 GB SSD. Today I helped a friend install his new iPad Pro and wanted to transfer over the contents from his old iPad. They didn’t recognize each other during setup when bringing them close together. He didn’t have iCloud backups. And he didn’t know all his passwords, so setting up iCloud for him wasn’t an option.

So I connected his old iPad to my MBP and did an encrypted backup. Then I restored his new iPad Pro from that backup, and it went fine.

But I have very little space on my MBP’s internal SSD so I wanted to clear it out. Reading Locate backups of your iPhone, iPad, and iPod touch - Apple Support was beyond useless. Nothing on that page seemed to work the way it said it would.

But I did find the ~/Library/Application Support/MobileSync/Backup/ (by using Option with the Finder Go menu to get into Library) and got into the MobileSync/Backup folder.

There I found a half dozen folders with gobbledy-gook names. One matched the time of today’s backup of my friend’s old iPad, so I deleted it.

While I was there I figured, hey, I’m all in on iCloud these days anyway (2 TB plan, iCloud backups of everything including Desktop and Documents, no “disk optimization” turned on, iCloud on on my iPad Pro and iPhone turned on and backing up too) so why do I need any of these MobileSync/Backup files anymore? I trashed them and afterwards I had 110 GB free space on my SSD. Their last modified dates were several years old.

That was ok, right? The Apple doc instructions for locating a device’s backups in Big Sur just plain didn’t work, so I used my best judgment at the time. After the fact, I just want to confirm if that was reasonable.

No, I don’t think this is a major problem as long as you’re certain you never want to restore those devices.

I’ve done the same Doug, and never had any regrets

FYI, probably the easiest way to manage backups in Big Sur is to connect an iOS device so that it is shown in the Finder, make the device the active window in the Finder, and go to the General page for the device. There is a button “Manage Backups” which you can click (after any sync with the device is complete) to show all backups stored on the Mac (even for other devices from the one that is connected) and you can delete the backups from there.

This basically replicated what was in iTunes Preferences, in the Devices pane, where you can also delete any device backups. The downside is that you cannot access the “Manage Backups” button in the Finder in Catalina or Big Sur unless a trusted iOS device is connected to the computer (unless I am missing something.)

I might need to, but in that case it will be from iCloud backups. Thanks. All this extra SSD space on my 2013 MBP now!

I couldn’t find the “Manage Backups” button at all. That’s why the Apple docs page seemed such a mess to me.

Here is where it is on my machine: 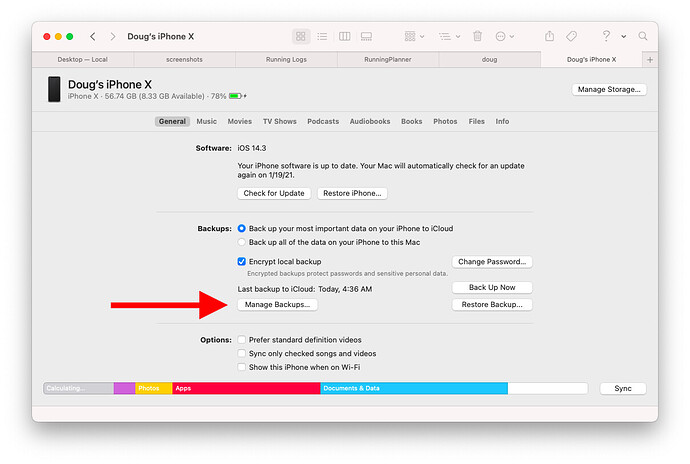 So a device has to be connected at the time to see that, right?

Yes, but it can be any device. It doesn’t have to be your friend’s iPad Pro. Just your iPhone or iPad will reveal all of the backups stored on the Mac.