How to Play Wordle, the Word-Guessing Game of 2022

Originally published at: How to Play Wordle, the Word-Guessing Game of 2022 - TidBITS

What is Wordle? It’s the Internet’s latest word-game craze, and it’s quick and easy to play. We show you how.

I should reboot The Magazine so you could write about Wordle for it.

(For those who don’t recall: Letterdepressed — The Magazine )

This is an AP Computer Science A Free Response Question, slightly enhanced.

I can never remember the address so I set up - bit.ly/wordlepuzzle

I should reboot The Magazine so you could write about Wordle for it.

(For those who don’t recall: Letterdepressed — The Magazine )

I’ve finally come full circle! You should reboot The Magazine, but not just so I can cover another word game.

Thanks very much for the play-by-play explanation. I’ve been interested in giving it a try!

After reading about it, I went to the App Store, searched for Wordle, and came back with an app called WhatWord. It doesn’t provide a starter word, and you can play it multiple times a day. It rather reminds me of a random-number generator – all depends on what your “seed” is.

One thing it’s good for is eying five letter words. I suppose after you master them, you’ll need to move up to six letter words. If there’s a tickler for that.

Sadly, this game’s popularity has led to lots of knock-off apps, including some that have decided to use the same name, and one that is arrogant enough to charge a $30 annual subscription fee. 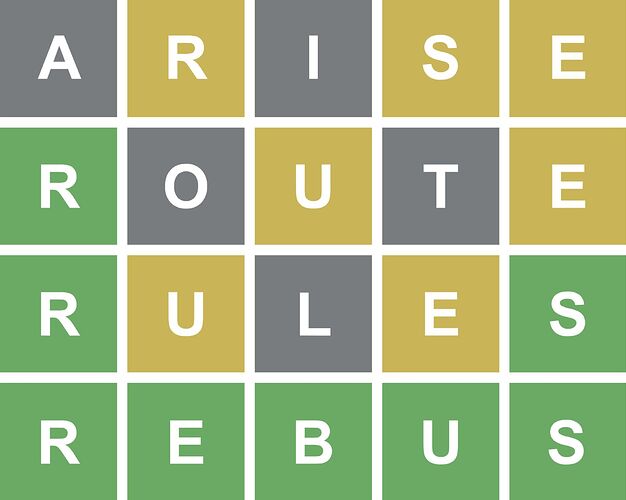 Don’t support these crooks. Play the original web game, which is the only one that supports Josh Wardle.

It looks like Apple responded to all the complaints and yanked most of the knock-offs: 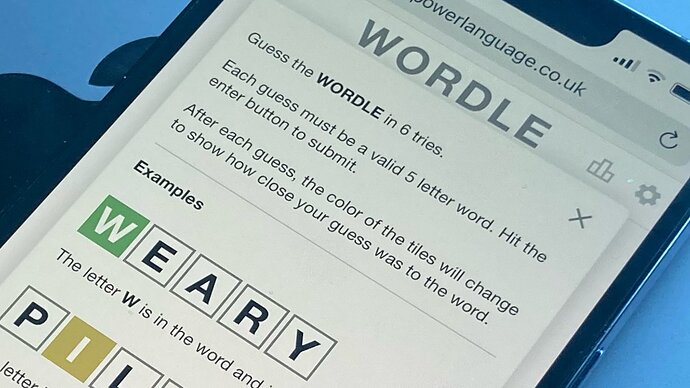 Amidst backlash, Apple has purged most of the Wordle clones from the App Store...

Apple appears to have removed most of the unlicensed Wordle game clones that had been flooding the App Store.

After reading about it, I went to the App Store, searched for Wordle

All of the Wordle apps in the App Store are unauthorized clones taking advantage of a popular game.

Wordle is only available via the Web for now. You can set a link to the webpage on your Home Screen via the Add to Home Screen option under the share menu. However, that doesn’t share cookies with Safari, so it won’t track your statistics.

There are a lot of word games very much like Wordle, and another similar game with colored pegs called Master Mind.

Knowing which letters are right and in the right spots, which are right, but in the wrong spots, and which are not in the word at all, makes the game much easier. Most games can easily be solved within four guesses.

This is also why Freestyle Solitaire is the most popular version of Solitaire. Almost all games are winnable, but you still have to think about it. You have to work at the solution, but you’re almost always awarded for your effort.

The fact you can only play a single game per day means you’re anticipating it and you’re not going to burn out on it.

You can set a link to the webpage on your Home Screen via the Add to Home Screen option under the share menu. However, that doesn’t share cookies with Safari, so it won’t track your statistics.

Well, it resets statistics if you’ve been playing from Safari previously, but it will track statistics going forward. I did the add to Home Screen last week and my stats have been tracked since then.

Lingo does exactly starting with a four letter word and progressing to a five letter word, time limits and other rules add to the excitement/enjoyment.

Although the URL is co.uk, the english used is US (f.i. favor)

Picking a word with 5 different letters is a good way to start. Even better is to pick a word with 5 of the most common letters in words. Here are the frequencies:

‘q’ is arbitrarily assigned a value of 1. The other numbers are the relative frequency compared to that. ‘e’ is almost 57 times more frequent than ‘q’. I used the frequencies in a python program to find words in an online dictionary that score high in the frequency of their letters. It also looks for a sequence of high scoring words that are also disjoint.

The idea is not that it solves the puzzle (it doesn’t), but that it gives good words to try at the start.

I like it because it’s closer to multiple choice than remembering names or trivia which I’m terrible at. However, I first just put in almost any five letter word I can think of with all different letters. I could always use the same word that I judge to have the best odds, but I don’t. I could easily cheat, but I don’t. I’m painfully slow but I’ve gotten every one so far (since day of this article) in five tries or less. Half of those in four tries or less. Today’s I got in four tries despite my first word drawing nothing (you still gain). I’m prepared for a losing streak now. Good fun. Thanks.

The NYT just bought it for “low 7 figures”. It will “initially remain” accessible and free.

It’s hard to imagine this will improve it in any way. Banner ads? Pushing subscriptions? Stashed behind paywall? Somehow NYT will be trying to recuperate their investment. Oh well, guess it was fun while it lasted. 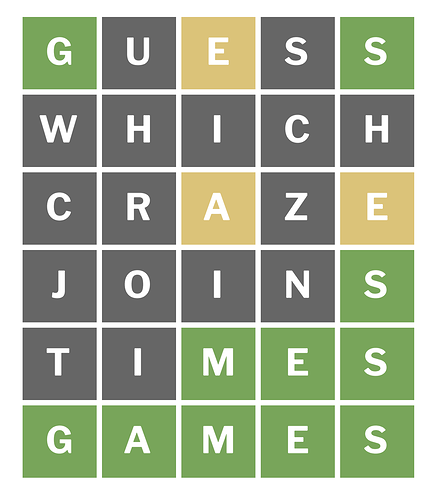 Glad for the creator who has found the phenomenon too hard to handle and, eh, probably would like the ‘low seven figure’ sum.

It’s got a sustainable basis now. There’s that.