How to initialize a phone with an unreadable screen?

I have what I think is an iPhone X that “someone I know” dropped, resulting in a screen that looks like this: 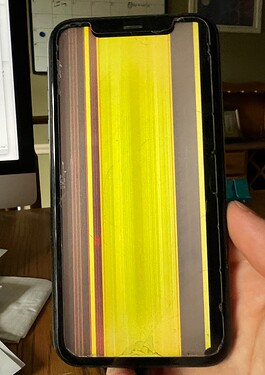 They now have a replacement phone. But I’d like to get a few bucks for it from someone who can fix the screen and make it useful. But first I need to reset it. Connecting it to Mac shows nothing in the Finder. Perhaps the screen is prompting Trust This Computer? which I cannot see.

Others say to go to iCloud.com and Erase the phone from there. But in my list of devices, which are many, I don’t think this device is shown. A couple of their old phones show Offline and do not respond to the Play Sound feature; so if it is one of those devices, and PlaySound doesn’t work, then I’m guessing Erase won’t either. Or, the device I’m dealing with is not in that list at all for some reason.

Someone else said to hold down Home and Power for 30s, but no combination of buttons held for 30s seems to do anything I can detect.

This is all exasperated by the fact that this failure happened maybe a year ago, and so I have less recollection to what I’m dealing with here.

In any case, whatever data is on this device, I need to get it off, and it would be nice to not have to resort to a sledge hammer to do so. With all this technology, I feel like I may be living in the Dark Ages.

Any advice is welcome.

In my own defense, I did nothing about it a year ago partly because, even then, this was a challenging problem to solve…

Do you know of any local repair shops in your area?

After having seen many videos by Jessa Jones at iPad Rehab, I think her solution would be to temporarily attach a donor screen. Then wipe the phone. Then put your original screen back.

Since you probably don’t have a spare screen lying around, I won’t suggest that you do this, but if you know of a local repair shop that can do this, it should be really easy for them.

Interesting idea. I don’t really have such connections.

But it does get me thinking about whether there’s some type of screen mirroring technique. Hmm, just remembered QuickTime offers Screen Recording. The Movie Recording option (ironically) lets you choose a lightning-connected iPhone. Works with a working iPhone, but the “bad” one is not showing up in the list. Darn. That would have been perfect.

I listed it online as free to anyone who can help me erase it. Some interesting ideas, but no luck. One person suggested a Lightning to HDMI connector to mirror the screen. I don’t have one of those, but like I said, the QuickTime trick didn’t work either, so I’m not optimistic about the former.

One repair tech suggested getting into DFU Recovery Mode (see screen shot), replacing iTunes with Finder. But like I said it doesn’t appear in the Finder sidebar. He thinks it could work anyway, but when I tried it nothing happened.

Well, I got it to work, but I’m not sure exactly how. But the results are particularly anti-climactic.

I followed a subset of that:

Still didn’t work. But I decided to try another cable, and then it did show in the sidebar. And I was able to then erase it from the Finder. Further testing confirms that the old cable is bad, even though it had been working pretty much right up to that point.

After it opened in Finder, the latter also provided some helpful info that normally I get iOS > Settings > General > About, including IMEI, S/N, and the model of the phone itself. Turns out it is not an X but an XR. I had googled some photos, and didn’t think that was possible, but clearly I was wrong. Yes, we go through a lot of phones here with 3 kids.

And there was an inactive iPhone XR under my son’s account in iCloud.com that probably refers to this device. But since I thought this was an X, I ignored it. Plus, his new phone is also an XR (no, you don’t get a newer phone when you keep breaking things), and I didn’t want to accidentally “erase” the wrong one. (As I mentioned, Play Sound did nothing). Plus he just started college and it’s a really time to bug him to troubleshoot.

The upside is the guy gave me $65 plus shipping for the phone that I originally said I’d give away for free to someone who could help me erase it.

Seems odd to me, though, that this Up/Down/Power trick works, though. Doesn’t it defeat the “Trust This Computer?” barrier that normally pops up? I guess this puts it into “Recovery Mode” that probably won’t have access to any of the data on the phone. But clearly it has the ability to delete the phone, which could suck in the hands of a malicious person. There was certainly no 2FA involved here or entering of passcodes. However, I did have to enter iCloud credentials to turn off Activation Lock. But that was after it confirmed the phone was restored to factory settings.

Thanks for the help here!

Seems odd to me, though, that this Up/Down/Power trick works, though. Doesn’t it defeat the “Trust This Computer?” barrier that normally pops up?

Not really. This mode can only be used to wipe the phone. If you want to read its data, then you would need to use a different mechanism, which would require authentication.

I did have to enter iCloud credentials to turn off Activation Lock.

And that’s the protection against theft. If someone steals your phone and wipes it with DFU mode, he will still need to use your iCloud credentials for the result to be in any way usable. Even after a DFU-wipe (as you did), it remains locked.

Which, BTW, is the reason why if your phone is stolen, you should never remove the activation lock or delete it from your iCloud account. Doing that will allow the thief to erase and re-sell the phone on the black market. As long as the activation lock is in place, he can only strip it and sell the cheaper parts (like the screen). The motherboard will be forever useless as long as the lock remains in place.

See also: Do not remove iCloud Lock from a stolen iPhone, because a thief asks you to | AppleInsider