How to Create App Aliases in iOS 15

Originally published at: How to Create App Aliases in iOS 15 - TidBITS

Adam Engst discovered that iOS 15 lets you move apps to the Home screen after finding them in a search… and then he stumbled across something even more exciting: you can now make aliases to apps!

Legitimately one of the coolest things we’ve discovered (OK, Adam discovered) in a long time.

Thanks for sharing this discovery, @ace. I have so few apps that it doesn’t mean much to me, but it’s nice to have another tool in the tool bag. However, my reality seems to be different from what you describe.

Probably I’m missing something obvious, but when I swipe down from the middle of any Home screen page (on an iPad Air 4th gen running iPadOS 15.1), I get what appears to be the lock screen. It isn’t the lock screen, because I can swipe it back up, but it has the same appearance (almost: it has a No Older Notifications message; there is a line under the battery percentage and Wi-Fi indicator; and there is no touch ID indicator in the corner by the button that reads a fingerprint). Have you an idea what I’m doing differently than you expect?

Probably I’m missing something obvious, but when I swipe down from the middle of any Home screen page (on an iPad Air 4th gen running iPadOS 15.1), I get what appears to be the lock screen.

You are probably dragging from the top of the screen, which brings down Notification Center. To invoke search, drag down from an area of any Home Screen that doesn’t have an icon- in other words, the area between Home Screen icons (or widgets) where you are dragging from the wallpaper rather than from an icon.

That solved the problem. Thanks.

I found this out by mistake also. How do you get rid of the alias without removing the app?

Wow. Thanks for this, Adam. I tried it and felt weirdly thrilled. I have no idea yet how it will be useful, but somehow a second home screen of regularly used apps seems like something that would be very useful… while maintaining my familiar folders.

Thanks again. What a surprise this early Sunday morning.

I tried it and felt weirdly thrilled.

That’s a great way of describing it—I felt exactly the same way. I was telling my parents about it and they couldn’t imagine wanting to use it and, honestly, I don’t really see myself using it either. But it’s so cool to be able to do something that was previously impossible. That happens too infrequently these days.

Adam, I immediately created a second “main” home screen for apps I use daily that never quite “earned” a spot on the top screen that comes up when I swipe up twice.

I use an upside-down U formation of apps with the top row empty thanks to iEmpty (if you use it definitely throw a few bucks into the hopper for the creator!) that matches well the natural travel of stubby little thumb. I even put the aliases pretty much where their folders are on my folders screen to support muscle memory.

This took all of about 10 minutes… heart racing just a bit… and not even as long to get used to.

Very useful and liberating. Thanks again for sharing it!

P.S. Here’s my main screen showing what IEmpty can do with ease. There are even more features such as creating “invisible” icons that are links of various kinds, but I’ve not explored those.

This feature works well with custom Home Screens, which is a part of Focus.

Apple’s Do Not Disturb feature has evolved into the ecosystem-wide Focus, which provides so many options and capabilities that it may be impossible to predict when notifications will work and when they won't. Adam Engst shows you how to use Focus and...

A little background on the Spider-Man YouTube image: the two Spider-Men pointing at each other has been a very popular meme for years. The joke, of course, is that like multiple Spider-Men, you can now have multiple copies of the same app. The three actors who have played Spider-Man in the movies—Tobey Maguire, Andrew Garfield, and Tom Holland—recently did a photoshoot paying homage to the meme. 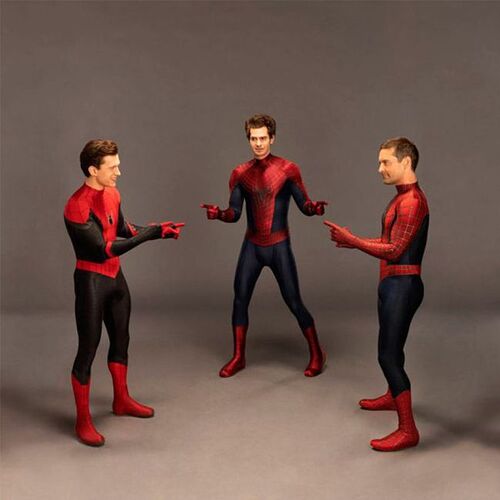 (Sadly, they did not include Nicholas Hammond, the original live-action Spider-Man whom some of you may remember, or Shinji Tōdō, the Japanese Spider-Man from around the same period, whose show inspired what would become the Power Rangers.)