Hot New Features in Safari in iOS 15 and iPadOS 15

Originally published at: Hot New Features in Safari in iOS 15 and iPadOS 15 - TidBITS

In iOS 15, Safari receives some of its most significant interface and feature changes in years. Here’s how to make sense of and take advantage of them (and how to revert to previous designs in a few cases).

I just discovered a new feature: Multiple timers on the Apple Watch.

For some reason, this doesn’t work with the iPhone.

One other thing: labeled timers only work when they are created with Siri. If you start a timer from the timer app itself, you cannot label it. (You can start multiple timers from the app, though, too.)

A good rundown of all that is new in watchOS 8: 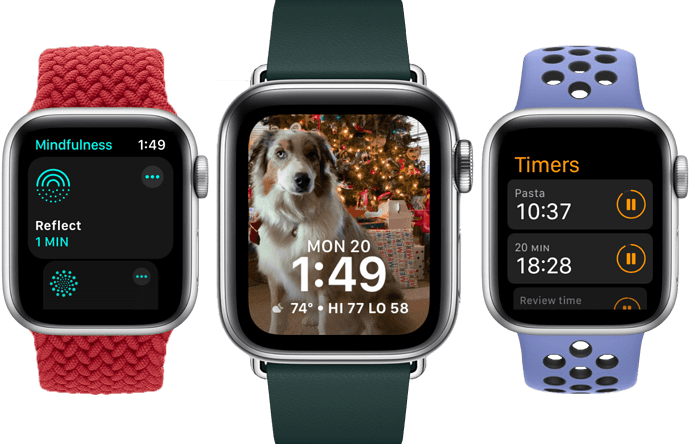 We’ve come a long way from the Wild West of watchOS’ early versions. Changes in recent years have been thoroughly iterative in nature, suggesting that Apple believes that the platform has reached maturity. watchOS 8 heralds no deviation from this...

Great article. Re closing tabs on iPhone, you can also swipe one to the left in Tab Grid to remove.

The only downside is you can no longer swipe tabs to close them. Instead, you must tap the somewhat obscured X button

Thanks, I’ve fixed that now. I must have swiped right and then assumed you couldn’t close tabs by swiping.

One “improvement” of Safari on the iPad I would pay money to reverse: Apple switched the appearance of foreground and background tabs, so that the darker, greyed-out, apparently disabed tab is actually the one you’re reading.

One of Appe’s competitive advantages over Microsoft used to be a consistent and sensible appearance of controls. Apple have slowly been vitiating this for years.

BTW, the capitalization above is taken verbatim from tooltips. Whatever happened to consistency and care to detail, Apple?

The tab overview is simply the tabs for the currently open tab group arranged in a grid. You can delete or rearrange the tabs in that view.

What would I like to see Apple do in the future to make Safari even better? Wow - answering that would take an enormous amout of time so I’ll just post the first ones that come to mind.

Have a setting to open all pages with all animation initially disabled (except perhaps those on one’s white list). Animation could be activated as needed for a page. This would separate Apple from Google and evil as much as anything else I can think of. Many people like me cannot tolerate very much animation and a lot of that has to do my vision.

If you haven’t already, it sounds like you should go to System Preferences > Accessibility > Display and check “Reduce motion.” Doing so won’t make Safari automatically stop animations but it sets a media query property that site authors can check for. Conscientious authors can have a design variation that doesn’t use motion. In addition to honoring that OS setting, the home page for Nintendo’s Animal Crossing has an on-screen button to reduce motion on that page (it prominently features big motion animation).

Thanks Curtis for reminding me. I checked the reduce motions settings on my iPad and they are mostly the opposite of what I want. I checked my iPhone and the motion settings were already set to my desires. Perhaps my iPad settings got lost when I upgraded my iPad. I forgot how much difference it makes in Safari but I’ll find out. It should be better than nothing.

re: “there’s no obvious way to view all open tabs. You have to open the sidebar and tap the tab icon…”
On my iPad, there’s a tab icon in the upper right corner — in the same “row” as the address bar.

Thanks for the kind words. I was referring to the Compact Tab Bar option, in which there isn’t an obvious tab button.

Thanks for the kind words. I was referring to the Compact Tab Bar option, in which there isn’t an obvious tab button.

Fair enough to say that this is not obvious, but a pinch of two fingers diagonally (e.g. a zoom out gesture) shows the open tabs in that window. Zoom gesture on one of the tabs makes that tab open as the current tab (though why you would do that rather than just tap the tab?)

Yes you were. I wound up re-reading that sentence “out of context.” And that led to my comment. My bad.

It’s surprising how Apple is flip-flopping on this.

With Big Sur the active window (and the active tab) became lighter, and backgrounded windows became darker. The exact opposite of how it was on previous versions of macOS.

Now with Safari 15, Safari appears to be going the reverse. Light tabs now indicate backgrounded tabs, while the foreground tab is lighter.

It would be nice if Apple made up its mind and then stuck with something for more than 18 months at a time.

I’m confused on how to work with windows in Safari in iPad OS 15… I think i’ve figured out the Tab Groups, which sort of make sense, but… I now have several windows open, each with multiple tabs, or just the start page. How do I close one? Why are tab groups in one place and windows in another? Why do my tab groups persist across windows? Can I turn it all off?! Can I move the … that invokes the split view window things? It’s smack in my muscle memory spot for ‘go to top of page’ and ‘go to url bar’.

After some futzing around:

You can also close a window that you are not actively using by tapping the multitask three dot control on the top, which will show icons for all of your Safari windows at the bottom (so, for example, you can switch to another window,). But you can swipe any of the non-active windows up to close the window (and all of its tabs, so be careful,)

The long-press the window control icon and merge windows is not new - that’s been around since split view and slide over started (iOS 9?)

In Safari on iOS 14 I had things set up such that when I launched a new tab or hit the address box, I would see a bunch of icons representing links in one of my bookmark folders. I cannot for the life of me figure out how to get that back in iOS 15. Every time I now open a new tab or hit the address bar, I see an empty page telling me something about Reading List. Any suggestions how to get back previous behavior?

Edit: finally got it. Hidden behind the Edit button. I was searching for it in Safari prefs since I initially assumed the Edit button pertained to Reading List in which I had no interest.