Internet mapping services have democratized cartography and brought it to the masses. Adam Engst has been working with maps of late and shares the most effective services, techniques, and tips that he’s found.

Last year, I discovered an error regarding the location of a cemetery in the middle of nowhere South Dakota. It was wrong in every digital map that I consulted – Google, Apple, Tom Tom, MapQuest, Waze, etc. Very frustrating, I only found the correct location the old fashioned way – by asking a local resident.

I reported the error (with the correct location information) to Apple and Google on the same day. Both companies fixed it within a week, and both sent me an email when they made the fix. (I’m hoping it percolates to the other sources that had it wrong, too.)

I also posted the info online so it would eventually get into the search engines, too: Where the heck is Riverside Cemetery, Huron, South Dakota? (Gordon Meyer)

So, yes, I wholeheartedly agree that it’s easy and worthwhile to report errors and make the maps better for everyone.

Until a couple of years ago at a nearby location, GPS’s were sending large trucks that were bound for a warehouse center down an increasingly narrow road that came to an end at a fence within sight of the warehouses. It got so bad that locals put up a big sign warning truckers before it was too late.

Years ago when GPS devices started to proliferate, the directions for a street near my then residence was mapped as going directly north to a main east-west road. No mention of the 30’ deep ravine where the road made a hard 90 degree right turn to go to a road that actually crossed the ravine. It took years to get that corrected, most likely due to Google’s street view being implemented.

Also, since mapping services add deliberate erroneous locations to catch people trying to profit by using the services’ data, some reported “errors” may not be corrected.

My sad tale of woe harkens back to the first release of Siri and Apple Maps and my brand new, just released iPhone 4s…the first iPhone to have both. I had an interview for a potential new job located in an area in Brooklyn that I was not familiar with. It was sleeting and snowing, and my husband offered to drive me there before he headed to his office. After the interview, I asked Siri for directions to the nearest subway station. Siri sent me slipping, sliding and slogging along in the awful wintery mix for blocks and blocks until I landed in front of a Subway take out restaurant.

In New Jersey, people heading down the George Washington Bridge were sent through a local neighborhood clogging the streets in the early morning. In Los Angeles, Google Maps were sending drivers down Baxter Street which has a 30º slope. Drivers would stop at the top of the road and panic, blocking locals wanting to drive.

In England, trucks were heading down extremely narrow and twisty roads which caused them to sideswipe cars parked on the roads.

Some great stories here, and thank you for the great article Adam. As someone who also plans a lot of running routes in unfamiliar places (my wife is the avid runner, not I), I’d like to recommend Footpath - it’s been fantastic for us and it would be interesting to see what you think of it vs. the apps you found.

I did 60,000km last year on my R1200RS motorcycle doing food deliveries for fun and pocket money inn Wellington NZ. For navigation We all used phones, for me an iPhone 11 or 12. On multi-deliveries on a single trip I found Sigic to be a superior experience. It had an easy interface for imputing multi waypoints/destinations and it was easy to look at an overview of the complete route and drag the order of deliveries to manually alter the order. However for singe deliveries, Apple Maps was the best . . Over the course of a year, I submitted about six address street number errors and many other mistakes to Apple on my iPhone. In each case I eventually received an email notification to say the error was fixed. I soon noticed that the more I submitted the quicker Apple fixed them. This of course is very subjective, but does aline with the feeling that the more you use Maps the better it became at planning a suitable route based on my previous preferences on routing to the same area.

If a business or site is missing (or the business has closed) my reports to Apple have usually quickly led to fixes and I get a note from the Maps app telling em Apple has fixed it. That’s great.

What’s not great is that I cannot get things fixed that relate to directions. An intersection close to where I live got a stop sign about two years ago. Maps actually shows that stop sign, but if you’re using directions, those directions will refer to “do this or that after the next stop” but then it’s actually not after the next stop, but the stop after that. It’s as if directions had never caught up to that new stop sign. I’ve tried reporting this to Apple via Maps app, but so far no luck. I guess because Maps reveals the new stop sign at that intersection, everything appears to be ok (and I suspect that’s why my reports are going nowhere). But as soon as it’s part of navigation, the directions fail to acknowledge the new stop and offer misleading advice at best. I don’t know what other conduit I should be using to get Apple to fix this.

i hope this will add inspiration for folks to create and share their own maps:

Google’s tools are the simplest for users to create custom maps, access the maps on mobile devices and share the maps with others; i’ve used Google Earth Pro along with Google Maps on various projects, for example tracking my personal effort to visit all 322 of Denver’s parks

a City of Denver portal provides geodata for all of Denver’s parks in Google’s KML format:

This dataset is polygon representation of parks, golf courses, and recreation managed by the Department of Parks and Recreation in the City and County of Denver. Data is based on parcel ownership and does...

by importing this data into Google Earth Pro on my desktop Mac, i overlaid the outline of every park property onto the default base map; after arranging the data into subfolders for those parks my partner and i had or had not visited, i gave the contents of each subfolder a specific color; as we visit more parks, i simply cut and paste from one subfolder to the other, and reapply the color scheme; i also sometimes add descriptive info (i wish i had done this systematically from the start)

periodically, i post a new version of this map online via Google Maps … i save my top level folder of parks from Google Earth Pro to a new file in KMZ format, then i visit maps.google.com in a browser (logged into my Google account) and create a new map in Your places / Maps; i drag the KMZ file into the import window to complete the transfer

to access the map on an iPhone, i launch the Google Maps app, click Saved, then scroll down to Maps to see a list of all my personal maps; these maps are optionally public, and viewers don’t have to be logged into a google account:

I’d like to recommend Footpath - it’s been fantastic for us and it would be interesting to see what you think of it vs. the apps you found.

Does it really require that you confirm every click with a click on “Route to Here”? That’s kind of a deal-breaker for me since it doubles the amount work associated with routing.

Not in my experience on the iPad and iPhone. I generally plan the route on the iPad using my pencil and letting it snap to the roads and trails. I’ve never seen a message like you got. Was this on iOS or Web?

I was using the Web version of Foothpath. The iOS app doesn’t seem to have this issue, but I’m having trouble with its guessing of roads when using my finger on the iPhone and will stick with On The Go Map there too. I could see how it would work much better with an Apple Pencil on an iPad. No worries—to each their own.

Route 18 in East Brunswick NJ shows two stop signs on the road in Apple Maps. There are no stop signs. It’s a highway.

When going down Route 18, Apple Maps will say, ”Continue straight past the stop sign.” I would like to correct this. I can’t do this while driving, but when I am not driving, stop signs and traffic lights don’t show up on the map.

How can I ask Apple to add and remove stop signs?

I can’t do this while driving, but when I am not driving, stop signs and traffic lights don’t show up on the map.

Amen. I posted about being bitten by that exact same problem above. Bottom line, how are you supposed to report errors that only present while getting directions?

If you drag up the search sheet in Maps (that also shows your favourites and guides), at the bottom is the Report an Issue button: 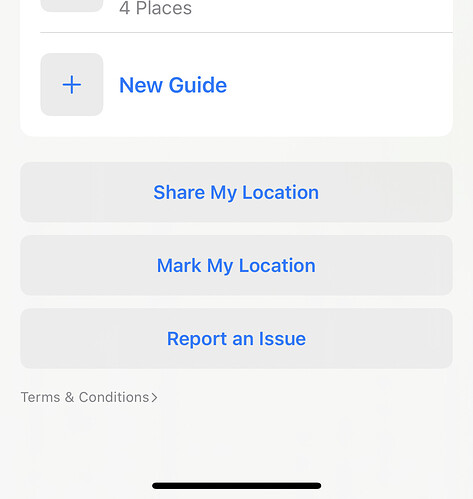 Tap on it, and one of the options is Report Route Issue: 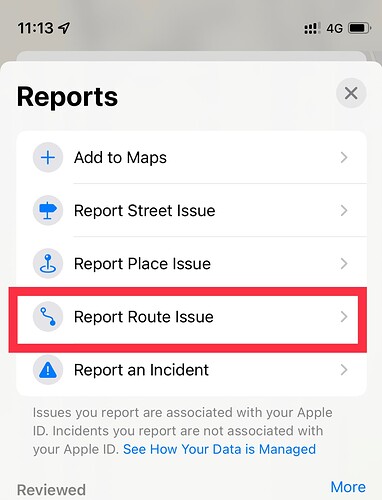 When you tap this button, it brings up a list of recent routes you’ve done in Maps. Select the one with the

issue and it will list every step of the route, so you should be able to select the problematic parts.