This podcast is related to the world of Apple only through the Mac cred of its host, Guy Kawasaki, but his lineup of guests makes it well worth checking out.

Cool show; I hadn’t heard of it. Guy is providing transcripts, which gives much more flexibility to read/listen/skip particular episodes. It’s a more civilized way to interact with podcasts. With the new tools to provide a rough cut of transcripts automatically, I fondly hope that more publishers will provide podcast transcriptions.

I immediately noticed Guy’s interview with Stephen Wolfram. It is the longest episode of the podcast so far. That interview covers many details of the relationship between Stephen and Steve Jobs:

Any interview with Stephen will miss many details. Mathematica is an expensive package, but Wolfram has provided a free version of Mathematica for the Raspberry Pi since 2013. A version for the Pi 4 was released last summer. A Pi 4 with 4GB of main memory is a substantial computational resource. Anyone with children or relatives in high school would give them a gift to show them this resource. Students can study/master a great variety of subjects, including mathematics, physics, and biology (particularly anatomy).

There’s also a Wolfram Player for many platforms including an app for iOS. The player provides a way to compute/interact with Computational Data Format files that have been authored in the Mathematica app (including the free RPi version). This provides a great way to provide computational visualizations for live lectures or distributed presentations. Wolfram had hoped that their CDF would find the ubiquity that PDF files have made for Adobe in printing, but that dream has yet to be realized.

About a year ago, Stephen Wolfram made a detailed posting on his home setup. Wolfram Research’s headquarters is in Champaign, IL, but Stephen runs the country from his home in Concord, MA. He spends many hours a day on remote-video services. He does some really geeky things, including walking in the forest while writing/editing on his laptop computer. Stephen notes: 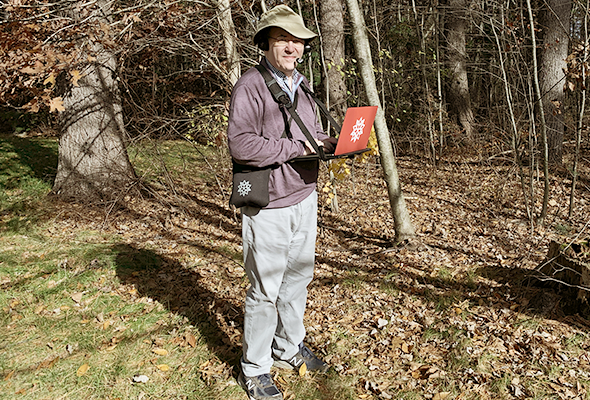 Stephen is the geekiest Apple user I know. Wolfram used to have a close relationship with Apple, but they appear more distant since the death of Steve Jobs. I’m clearly a huge fan of both; I think the DIY community can find many great computational/visualization resources for their projects in Wolfram’s software.