((( NOTE: Anyone using Google Chrome should update to the current version NOW for security reasons. You should be running at least 99.0.4844.84. Check the last digits carefully because “.82” and “.83” were released a few days before. News link below. )))

Google has released Chrome 99.0.4844.84 for Windows, Mac, and Linux users to address a high-severity zero-day bug exploited in the wild.

Now that we all have our updates and adrenaline flowing, I wanted to highlight the massive app size increase of v99.

Google Chrome 99.0.4844.51 stable release for macOS desktop (officially promoted March 1, 2022) increased the app size by over 85%. Here is a side-by-side comparison of the first v99 next to the previous, and final v98 release: 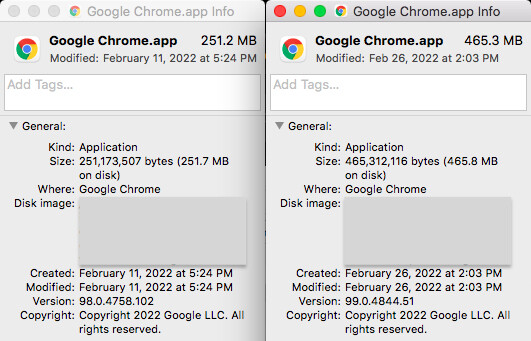 (Screenshots based on clean downloaded apps from their mounted .dmg files.)

Interestingly, on systems with custom firewall security software such as Little Snitch, launching v99 triggers not only the usual “ksfetch” (auto-update engine) and “Chrome Helper”, but now there are also a pair of “Chrome” hits that both want to access 239.255.255.250 (SSDP multicast address). Denying them blocks Google Chrome from accessing the internet.

(Disclaimer: I am not a fan of Google Chrome and use Firefox as my primary browser. Firefox is plenty fast and does not try to scan, catalog and sell every aspect of my activity. Security, privacy and options are paramount.) 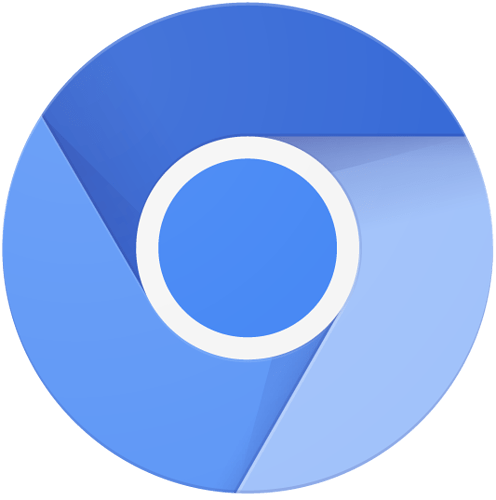 Mine is even bigger, 930.3 MB on disk. If I right-click it and Show Package Contents with the Finder set to Calculate all sizes, I can see within Google\ Chrome.app/Contents/Frameworks/Google\ Chrome\ Framework.framework/Versions/ that I have two copies, 99.0.4844.83 and 99.0.4844.84. I assume this is a by-product of the auto-update feature, *.83 is the version that was running and *.84 is the latest version; in the folder is a Current symlink that points to the newest version.

I can see almost all the application’s size is within the framework folders and the majority is from a single file, Google Chrome Framework. If I deleted *.83, the total app size would be more like what you now have. The size didn’t really change between .83 and .84 so I don’t know why it it’s so much bigger between v98. and v.99. I tried looking at a build of Chromium, the open source browser on which Google Chrome (and Microsoft Edge and a number of other browsers) is based but I don’t think it’s useful, it’s a lot smaller even in its latest version and it lacks a lot of what’s in Chrome.

Interesting points, Curtis. Google updates do reside inside the “living” app until the restart/update process.

Just FYI: I took the screenshot of both Info windows for the Google Chrome apps as they were inside their respective .dmg files downloaded from Google. As far as I can tell, all subsequent v99 updates have been of nearly identical size (with slight adjustments of less than 1 MB).

While this is not a fair comparison, Google Chrome 87.0.4280.141 (the last version with Flash included from Jan 2021) is about 244 MB in its .dmg. Just a reference point from something I had sitting on a drive.

For what it’s worth, when I was editing the Watchlist item about the Chrome update, I noticed that @agen accidentally forgot to update the size in one place, so it was from the last time we covered it, in v.69 from 2018. Back then, the download was 68.5 MB, so I downloaded a fresh copy of v.99, which was 182 MB.

Thank you for the clarification. I just pulled up the two .dmg files in question and drag-copied them to new folders on my boot drive. Identical sizes as in the screenshots above (except for slight adjustments in the “on disk” values, of course).

I downloaded these .dmg files using this URL which in theory should be the macOS standalone:

Am I using different files than you? I know Google likes to mask direct downloads on their servers, sometimes redirecting to what they think you want or should have.

((( NOTE: Anyone using Google Chrome should update to the current version NOW for security reasons. You should be running at least 99.0.4844.84. Check the last digits carefully because “.82” and “.83” were released a few days before. News link below. )))

Wow. March was a busy month:

I expect the near double-size values you guys are seeing is due to Google Chrome’s auto-update process where it pulls down the next version inside its package and then does a switch/replace action on the next launch.

I have a tiresome habit of downloading the full installer and replacing Chrome from the .dmg on certain systems that are configured to block the auto-updater. More work for me, but it allows control over network use in specific situations.

Either that, I am just nutty.