My expensive, less than 2 year old Apple extended wireless keyboard had died enough that it’s unusable. I lose the right Apple key a few months ago, the slash above the keyboard last week. All easy to work around.

I need a new keyboard. It has to have a numeric keypad and wireless is a huge bonus, though not necessary. I type decently on this style though I probably typed better on older keyboards.

Any suggestions? I’m hoping I have an old one to use for today. And if it’s possible to take this one apart to clean it, I’m all ears.

As you well know, Macs can use any USB or Bluetooth keyboard, not just keyboards designed for Mac use.

The primary difference between a “PC” keyboard and a “Mac” keyboard is that the positions of the command and option keys (windows and alt on PC keyboards) are swapped. You can swap them back using system preferences: 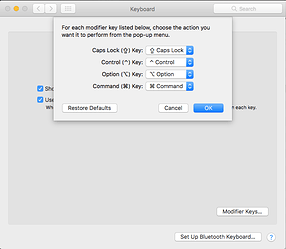 Depending on your keyboard model, you might be able to swap the physical key-caps to align with your system preferences.

That having been said, I think the most important thing is selecting a keyboard that is reliable and is comfortable to type on. The latter is, of course, a matter of personal preference.

If you let us know what kind of feel (short/long travel, tactile feedback, noise, etc.) you prefer, I’m sure several people will be able to provide specific product recommendations at a variety of different price-points.

For whatever keyboard you get, there’s an app called Ukelele that will let you remap any key on it. Very useful free app.

And there’s Karabiner (https://karabiner-elements.pqrs.org), also free and quite sophisticated.

I need a new keyboard. It has to have a numeric keypad and wireless is a huge bonus, though not necessary.

As is Das Keyboard (which is what I’m using now). It’s very clicky.

Note that Ukulele only remaps keys that produce characters. For anything else, use Karabiner.

If you’re a fan of buckling-spring keyswitches (the loud switches with incredible tactile feedback used on IBM PC and PS/2 systems), Unicomp still makes them. Unicomp was founded by former Lexmark (which was in-turn former IBM) employees who wanted to keep making these keyboards after IBM/Lexmark stopped.

They sell several different wired keyboards including one Mac model that includes Mac media functions on the F-keys and puts command/option in the Apple-standard positions.

Thanks! To David’s questions, I’ve never had a problem with clicky keyboards, but I have managed to chug along on my 2015 MBP keyboard, and the Apple Extended wireless. (I thought I had a wired at some point but I haven’t seen it today so maybe not)

I have a short wireless one here that feels a bit better and I seem to remember liking my 2008 unibody keyboard even better.

I dug around in my closet and found my original G4 FW800 keyboard (awful!) and am now using an old Macally iKey from around the same vintage. It does feel weird typing on such long-stroke keys again but I could probably get used to it again (maybe). It’s got a huge footprint though.

I love how the Apple keyboards are so slim and it looks like Macally also makes similar ones.

I like the convenience of the Apple-specific keys along the top. A few of you have posted alternatives for mapping keys, but to me it’s always nicer when they just work.

I do remote control some Windows machines and it’s nice that the Apple Control key works as an actual Windows Control key.

I will check out the brands listed - thanks for those!

I love my Logitech Craft keyboard. So well made, keys nicely scalloped. Intelligent backlighting. There’s a big ass knob you can do all sorts of things with but which I just have set to manage volume and play/pause. It connects very quickly with up to three devices and there’s an excellent configuration preference panel.

For years I had the Logitech K811 which is smaller, no separate keypad, it is also great but my wife commandeered that…

Another thing I usually suggest is to go to a store with lots of floor samples (like Micro Center) where you can actually type on a few dozen different models to decide what feels good.

But I suspect stores aren’t putting out floor samples right now, due to the coronavirus. If yours does, please wear gloves while testing them. Even if you and the keyboards are clean, it will make others feel better.

I second the motion on Logitech. If the K811, which I have,is any indication of Logitech’s other keyboards. it has just the right amount action, response and feel.

I need a new keyboard. It has to have a numeric keypad and wireless is a huge bonus, though not necessary.

My favorite wired full-size keyboard for years has been the Microsoft Wired Keyboard 600. The wired USB connections avoids RF interference problems. The keyboard has a membrane between the keys and the switches which makes it be resistant to spills. After enough crumbs, coffee, and so forth, the keyboard disassembles with a standard Phillips screwdriver and the membrane and keys (captive in the keyboard top) can be washed by hand or in the dishwasher.

As noted by shamino, Keyboard preferences swap the Windows and Alt keys to act appropriately as Option and Command keys. As a bonus, the dedicated media and volume keys operate as expected and there are a Caps Lock indicator, an Escape key, and 12 Function keys. No special or proprietary software is required.

Silk screened labels on the keycaps do tend to wear on heavily used keys. The current price of about $15 makes it reasonable for a heavy user to have a spare.

I have not found a more cost-effective full keyboard that is spill-resistant. Cat owners don’t have to worry about hardware problems from kittens on the keyboard.

Our wired keyboards and mice plug into monitor USB ports, so cable lengths are no problem and powering down the monitor to reduce heat also prevents unwanted typing or mousing.

I’ve always used old wired Apple keyboards and kept a spare on hand, currently using model A1048. Since they’re long discontinued and even refurbished, they’re pretty cheap. Looking at the Matias keyboards (I’ve been thinking about a “mechanical” keyboard for a long time), I like that the “Help” key is gone (I too often hit it when jabbing at the Home or Delete key) and they’ve followed Apple’s example of putting the “Fn” key there instead of messing with the Mac control keys layout (which Das Keyboard does and even Apple does on its mini keyboard — highly irritating!)

I also recommend Matias keyboards. I love my Matias Wireless Aluminum Keyboard.
It perfectly replaced the Apple wired keyboard A1243 that I used years ago. No re-mapping of keys needed for this keyboard. It is thin, comes in four colors, uses bluetooth, it can be hooked up to 4 devices, and the battery lasts a year.

If you want mechanical keys, Kinesis makes a variety of keyboards with Cherry switches. Both Cherry Brown, which actually clicks a switch, giving tactile feedback along with the sound of the switch, and Cherry Red, which operates its switch without the mechanical click, but still has good tactile feedback.

If UPS can find the Mac Pro that Apple shipped me last week, I will give the latest Apple keyboard a trial. But I expect to go back to my current old Kinesis Freestyle, which lets you hold your wrists the way the Old Watchmaker designed them. I will soon replace it with the bizarre looking Kinesis Advantage 2, which takes care of all the ergonomic considerations. I hear a typist can learn to use it in a few days and be proficient and up to speed in a very few weeks. (I first saw this keyboard way back near the beginning of the century at the desk of a upper level software development architect and manager at a big Silicon Valley software company. 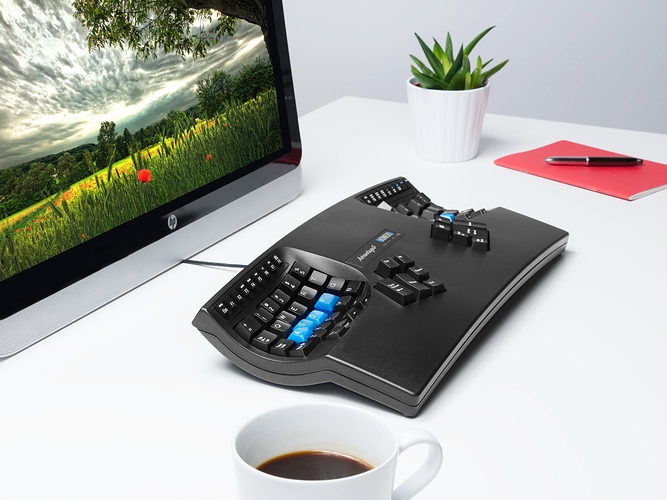 Kinesis has the Mac/Microsoft business in hand, and the keyboard comes with well featured software for many kinds of customization. This is interesting: the customization is done in the keyboard, not in a keyboard driver on the Mac.

Sit down before looking at the price.

My experience with Matias has been less positive. I bought one and had it replaced under warranty but both suffered from disappearing characters on keys and intermittent non-working keys. I switched back to Apple keyboards (since a couple of weeks I’m using an Apple Magic Keyboard with numeric keypad).I still keep a 20-year old Apple USB keyboard at hand when everything else fails …

My Matias experience has also been less than stellar. I’m using the “RGB Backlit Wired Aluminum Keyboard for Mac”. When I first ordered it (two years ago), the first one arrived DOA. They were very good to immediately ship me another one without requiring that the DOA unit be returned. Now, two years later, the space key is starting to create multiple spaces when only one is intended. The keyboard has a nice feel and it’s mostly quiet, but I can’t trust the space key anymore. I’m starting to think about replacing it.

Sorry to hear of both your negative experiences. I purchased my current Matias back in 2017, and (knock on wood) I have not had any issues with it. It has been great for me, as have previous Matias keyboards I have used in the past. As with all experiences, YMMV.

It is good to hear that their customer service was a positive experience on your initial purchase, Andrew.

My son loves his recently purchased keyboard and mouse from Logitech, MX Keys for Mac and MX Master 3 for Mac. I think I’m going to get them for myself as well. He uses them with multiple computers (as will I) and he can instantly switch between them.

Remember to warn your son that, as super nice as the Logitech MX Keys is, Logitech told me, “the device is not water resistant.”