I am writing on this forum to let you all know that Dropbox, with their latest release (163.4.5456), has just dropped support for storing files on an external drive. All files must be in ~/Library/CloudStorage. That’s an issue with some of my clients who have TBs of files and want to keep an offline copy of their files and don’t have enough space on their internal drive.

I don’t know of a solution as of yet. Any advice (besides leaving Dropbox for another service)?

All files must be in ~/Library/CloudStorage.

This is (I believe) mostly Apple’s fault. They are requiring this of all sync service apps like this; the kernel extensions that these apps were using are deprecated by MacOS. See Apple Confirms macOS 12.3 Deprecates Kernel Extensions Used by Dropbox and OneDrive - MacRumors

OneDrive already made this change.

Any advice (besides leaving Dropbox for another service)?

The app Maestral can sync Dropbox files to a Mac and you can choose the sync location.

I don’t like what the DropBox app does and switched to Maestral about two years ago, and I’m still using it.

OneDrive already made this change.

I also use Maestral instead of the official Dropbox client, but I’m a very light Dropbox user.

Is this restricted to a particular version of macOS and above? I’m running v163.4.5456 on Catalina 10.15.7, and I don’t have a ~/Library/CloudStorage folder at all. All my Dropbox files are in ~/Dropbox, where they’ve been since I first installed Dropbox years and years ago.

As for solutions, the idea that immediately comes to mind is setting up an external disk, or a partition thereof, with a filesystem mount point inside the necessary folder. A mount point should be seen as part of the same logical volume—this is, in fact, how APFS boot drives are formatted, with the “Macintosh HD - Data” partition invisible (as a separate partition) to everything except the filesystem itself. (You might have to format the external in APFS for this to work.)

Just an idea. I have no idea whether it would work, as I haven’t tried it. But logic says it’s probably worth a try.

The other idea I have is to try a symbolic link to the external folder where you want to put files, but I suspect that this might not fool Dropbox.

The other idea I have is to try a symbolic link to the external folder where you want to put files, but I suspect that this might not fool Dropbox.

I tried this once. It used to work a long time ago; after a while, Dropbox wouldn’t recognize the files being linked and wouldn’t sync them.

Is this restricted to a particular version of macOS and above?

Yes. This was introduced in macOS 12 (Monterey).

The kernel extensions used by DropBox and OneDrive prior to this change won’t work on that platform. The apps needed to be changed to use Apple’s framework for cloud-based file storage.

It would seem (based on this thread), that DropBox’s app is limiting you to one specific location, while Microsoft figured out how to use it with other locations.

I hope there will be a fix for this. With Apple offering minimal internal SSDs, usually 1-2 TB, this would be a disaster. I had to buy a external drive just to supplement my built in Studio drive because I needed 4 TB but was not going to cough up crazy money for the internal 4 TB.

So did I. When it stopped working, a couple of years ago, I reversed it: I put the application’s folders into Dropbox and put symlinks to those folders where the originals should be. Thus far (I’ve not moved to Ventura yet), it works well.

I’m on Ventura 13.1 and my Apple Silicon Dropbox version is v165.2.19 (which appears to be later than the OP’s). My Dropbox folder is simply a subfolder of my home folder (~/Dropbox), the same as it always was.

Yes, mounting the external drive at /Users/username/Library/CloudStorage/driveName/ instead of /Volumes/driveName/ was my first thought for a workaround, having previously heard Dropbox wouldn’t follow symlinks. I found a post about editing fstab to mount a drive that’s rather dated now but the concept may still work.

Even if a drive will still mount to an arbitrary directory, it might not fool Dropbox.

With regard to @aforkosh, I wonder if his version is higher because I have an Intel iMac vs. his Silicon Mac. Also, here’s what is in the Dropbox Preferences: 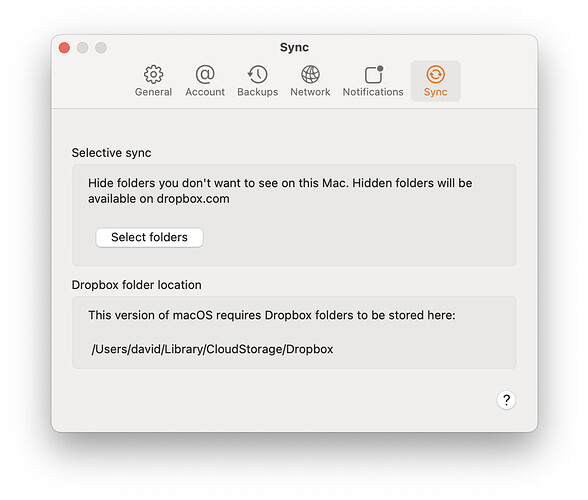 For the record, this is what my sync tab looks like: 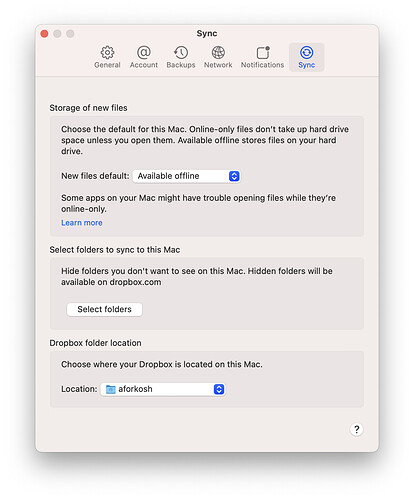 Looks like Dropbox found a way to resolve the issue on Silicon that it can’t use on Intel Macs. I wonder if the version number disparity means that the Intel and Silicon versions of Dropbox are on feature-divergent dev branches now.

That’s very strange. According to Dropbox, choosing the location is no longer supported on the Mac:

There seem to be several limitations, including not being able to have all files default to offline availability.

Since Onedrive has a solution for the using external drive with CloudStorage location, it would be surprising if Dropbox don’t.

Microsoft’s explanation about how to use OneDrive with an external drive while using the Apple mandated fileproviderd extension and the ~/Library/CloudStorage location is within this article:
https://techcommunity.microsoft.com/t5/microsoft-onedrive-blog/inside-the-new-files-on-demand-experience-on-macos/ba-p/3058922

The issue has come up in various Dropbox Community posts without resolution eg here and here.

Microsoft’s explanation about how to use OneDrive with an external drive while using the Apple mandated fileproviderd extension and the ~/Library/CloudStorage location is within this article:
Inside the new Files On-Demand Experience on macOS - Microsoft Community Hub

Thanks for that link. It explains what Microsoft is doing and hints at what Dropbox could do for a similar workaround.

Microsoft maintains two directories with cloud content. Their “sync root” is the location where files are synced. It is (and must be) ~/Library/CloudStorage/OneDrive-Personal, just like Dropbox’s directory. But they also maintain a cache directory in a “hidden location”.

Their cache directory apparently (based on their article - I don’t use OneDrive on my Macs) contains a shadow of all your cloud storage. Most of the files are zero-length, except for local changes that have yet to be sync’ed to the server and files you tagged as “Always available on this device”. I assume files in the CloudStorage location exist as links to this cache directory for these “always available” files and when the local version differs from the remote version (e.g. when new changes have been saved but not yet sync’ed).

I assume that, when this is configured, files you mark as “always available” and unsynced changes will therefore end up on the external drive. Other files (those that OneDrive can choose to discard) will be stored in the CloudStorage location, and will be downloaded/purged as necessary based on available internal storage and your usage patterns.

All that having been said…

I wonder if another possible workaround might be to put your home directory on external media. Specify that location when creating the account. Then, I assume the CloudStorage location would be on that media. This might impact system performance if it’s an HDD, but the impact might not be too bad if the System and Data volumes (including application installations) are still on the internal volume.

Of course, if you try this, then that external volume MUST be available and mounted before you log-in. Depending on your device (destkop vs. laptop) and your usage patterns (tethered to a desk or on the go), this may or may not be acceptable.

I have an M1 Mac running Ventura and I upgraded Dropbox to this version when it suggested it was necessary for this OS. It immediately moved the Dropbox folder from my home folder to the location under discussion here.

What it also did was screw up my trash folder, although I now believe this is a Ventura bug.

Anyway, I’m commenting here, because it is still possible to run the other version, with the Dropbox folder in the home folder. I uninstalled Dropbox completely, reinstalled, and was offered the option at some point to not use the new version. That moved my Dropbox folder back and fixed the trash (which was still broken, even after uninstalling Dropbox). I’m now still running that version without any trouble.

@jtbayly Thanks for that info. For my clients that continue to have their Dropbox files on an external drive, I will just not upgrade them to the newest Dropbox for as long as I can.