Continuity Camera Turns an iPhone Into a Mac Webcam

Originally published at: Continuity Camera Turns an iPhone Into a Mac Webcam - TidBITS

If you think the webcams built into the latest Macs and Apple’s Studio Display leave a bit to be desired, there’s an alternative. Harnessing an iPhone as a Mac webcam. Apple is making this simple with Continuity Camera, a virtual-camera system built into iOS 16 and macOS 13 Ventura. Best of all, iPhones provide stellar optics for satisfying webcam chats.

Thanks for doing this, Julio. It sounds very promising indeed.

I plan to try it using my iPhone 12 Mini as soon as the “stable” version of iOS 16 comes out. Until recently I’ve been using the basic version of Camo with a Dell display using a flexible gooseneck mount. I see it’s not available here in the US any more; I’d recommend it unreservedly to people living elsewhere for its, um, flexibility if the clamp’s spring were not so strong: mounting and unmounting your phone is a struggle. So I’m looking forward to using the Belkin mount on my new Studio Display.

This intrigues me, since it suggests that the Mac is connecting to the phone via wifi directly without asking permission and that it would work anywhere wifi is available–a public network in a coffee shop, for instance. I find that vaguely unsettling . . . I wonder if it will work if my Mac is connected to my Synology router’s guest wifi, which blocks connections to other devices on my LAN? We’ll see.

[edit] I suppose it’s possible the Mac creates its own dedicated LAN?

I’d love to try this when Ventura goes final. Most time at work I’m in clamshell mode with a great display but w/o built-in camera. This seems like a great fix for my many Zooms.

If anybody has good recommendations for a flexible mount (gooseneck) compatible with a 12 mini, I’d really appreciate it.

This will be useful though between document camera, external webcams and my built in cams I have five cameras already at my desk…

I bought this device a few years ago and regularly use it for Facetime/Zoom sessions using an iPad or iPhone. Maybe not ideal for use as a Mac webcam but it is quite versatile. Unfortunately it is not branded so I don’t have a link to a product page. 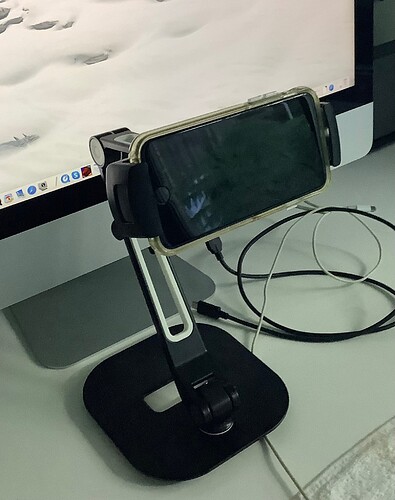 There’s a plethora of such devices but that one looks like it is from this brand. This intrigues me, since it suggests that the Mac is connecting to the phone via wifi directly without asking permission and that it would work anywhere wifi is available–a public network in a coffee shop, for instance. I find that vaguely unsettling

AirDrop uses Bluetooth to discover peer devices, but the actual data transfer takes place using an ad-hoc Wi-Fi network (that is, a point-to-point network for the two devices that is created for the one transaction and is taken down afterward.)

Continuity Camera may be doing something similar if the devices are not already connected to each other via a pre-existing Wi-Fi network.

But if you are concerned, I’d wait for someone to perform an analysis and write an article explaining the details.

Not concerned as much as curious, David, and thanks for the insight into AirDrop–I’ve not seen it explained that way before. So there is such a thing as an “ad hoc” network . . .

So there is such a thing as an “ad hoc” network

I ran across this article from Wired (from 2015) that describes an app called “FireChat” (defunct since 2018) which used this tech for peer-to-peer chatting without any formal Internet connectivity.

I am investigating an Opal camera. Other than being HOT (literally) it works great with superior image quality with very slick iOS software. Other than it’s high cost and heat, it works extremely well! It even follows and maintains focus on my face! So far it is getting high ratings… especially, given that I don’t need to make my phone serve “double duty”

I recall the initial launch back during the pandemic early days but never came across one in person. I must check one out at some point.