HP unintentionally revoked a security certificate that broke printing for many Mac users. Until Apple and HP restore the certificate, use AirPrint instead.

What worked for me was to do the following, most easily done from an admin account. This works for all printers - no need for AirPrint capability, or even for it to be an HP printer - and is a good starting place for dubugging almost any printing problem.

Control-click on the column of printers and choose Reset Printing System to remove all the current setup. If it’s not an across-the-board problem, you can just remove whichever printers are failing.

Thanks for the specifics! I have an HP Color LaserJet MFP M477fdw, but it doesn’t seem to be affected by the problem at all, so I haven’t been able to get a good grasp on the workarounds.

Happened to a friend of mine. I removed and then added her HP printers again, which seemed to resolve the issue on her Macbook running Catalina.

Running Mojave. My HP OfficeJet Pro 6968 wouldn’t print Saturday. I had last printed on Thursday and had finally installed the most recent Security updates on Friday.
I had not received a Malware alert. The Print icon would show in the Dock for 5 seconds and disappear
I removed the printer from Sys Pref / Printers and added it back
On Sunday, after a Power Down and StartUP my HP printer was back working

I’m guessing that there are actually three scenarios here:

Oddly, as I recall, it began earlier in the day with Software Update telling me that I had an update. And that update was a small HP driver update.

Then later in the day, an HP framework file was identified by macOS as being dangerous, and something that could damage my system. I clicked on the “Reveal in Finder” button to locate the file. Although I can’t recall the exact path, I found its folder location buried (to find the path, hold down the command key, and click and hold in the window’s title bar) in a folder or two that was inside an HP folder residing in /Library/Printers (not /System/Library or ~/Library/Printers). I deleted the HP folder. Next, I deleted the printer in System Preferences > Printers & Scanners. But trying to re-add the printer in Printers & Scanners didn’t enable printing. So then I re-installed Apple’s mega-HP driver package (last updated in 2017) from HP Printer Drivers v5.1 for OS X . I have a duplexer and multiple trays on the LaserJet 4300, so I knew that Apple’s Generic PostScript driver (which only allows duplexing) wouldn’t work for me. After reinstalling the HP driver package from Apple, and re-adding the printer in System Preferences > Printers & Scanners (and specifying the 4300 drivers), I’m able to print again with all printer functions.

Ditto to many of the same aforementioned experiences. On October 22, 2020, after receiving the malware warning and rebooting both my HP Color Laserjet Pro M452dw I still had the warning. I used HP’s uninstall app then went to their website and downloaded a new driver. [one note: I first had to actually download a newer version of HP’s uninstaller before the uninstall process would work.]

@ace
Another scenario is that some users had problems earlier, but without doing anything, printing is working for them now.

When I switched from a wired connection with my iMac to a Wi-Fi connection, the printer (and scanner) were returned to operational condition.

HP has now published instructions on how to recover from this problem. It basically involves updating the driver. 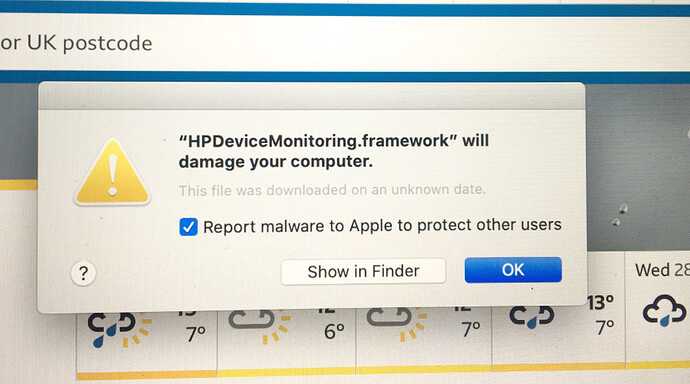 "HPxxxxx.framework" will damage your computer" message in macOS Catalina or...

Customers are getting a message similar to the one below:   Customers receiving the "will damage your computer" message along with others like "unable to access cups/tmp" or "'@%' cannot be opened" need to update their version of the macOS with...

Not working for me. I followed all the instructions, uninstalled the HP software with the uninstaller. Then dowloaded the easy installer, ran that, and when it was done, I got the dreaded "HPxxx.framework will damage your computer. It can print now, but I have to dismiss that dang window at least twice. HP needs to fix this and make the fix easy to use. And it would help if Apple treated us like the adults we are and let us use our computers as we please.

Further comment. I tried to do the same thing on my wife’s computer. But now the link to the new drivers on the HP community page no longer works. A perfectly working printer now no better than a doorknob. I may have to buy a new printer and it definitely won’t be an HP.

now the link to the new drivers on the HP community page no longer works.

Software and drivers for

We were unable to find drivers for your product.

These people have made my printer obsolete. Just like that, I can only use it on an iMac I plan to replace in a year. There is nothing wrong with the printer. Sigh. If this was a car, they’d make the sparkplug non functional (by accident) and then tell you there are no such sparkplug left. Gotta buy a new car. I can’t believe they can get away with this.

I’d definitely recommend calling HP support and seeing what they have to say.

You might also be able to use the Gimp-Print (nee Gutenprint) drivers.

These people have made my printer obsolete

They’ve done worse to many of their printer users: 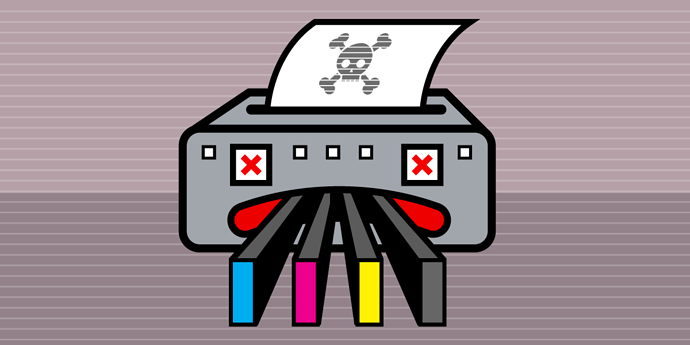 Ink-Stained Wretches: The Battle for the Soul of Digital Freedom Taking Place...

Since its founding in the 1930s, Hewlett-Packard has been synonymous with innovation, and many's the engineer who had cause to praise its workhorse oscillators, minicomputers, servers, and PCs. But since the turn of this century, the company's...