Claris has announced that it will be changing the name of FileMaker Pro to Claris Pro and integrating it with a modern, Web-based development environment called Claris Studio. Even better, it will be free for personal use—a license fee is necessary only when deploying a solution to additional users.

Any idea if the new freemium Claris Pro will import old Bento databases? I still use Bento in Mojave but one of these days that will need to end, I’m afraid.

For the free, individual copies of the software:

–Will the database be local on the user’s Mac, or based in the cloud (I assume iCloud)?

For that matter, will the programs all be “web based” (as per the article for Claris Studio) or will individual copies be installed on the user’s computer?

–Will the new software be compatible with existing Filemaker applications, or must old FM applications be “recompiled” using Claris Pro/Studio?

–Relatedly, will the programming “language” of Claris Pro be significantly different than Filemaker Pro?

Obviously, there’s no way to know for sure, but from what I took away from the video:

From what I could tell, there is only one version of Claris Pro, and it will be free for everyone. Developers will have to pay when they deploy and want to open things up to more users.

Definitely an interesting strategic move. It brings back memories of my first forays into web development using FileMaker Pro 3 as a backend for a website using ROFM CGI. Then they introduced CDML and built support for it into Claris HomePage. It was my introduction to database-driven websites and my bread and butter for several years until I began to work with SQL databases and PHP.

Any idea if the new freemium Claris Pro will import old Bento databases?

No idea about Claris Pro, but TapForms imports Bento databases, and it also fulfils the promise of what I hoped Bento would be! It’s well designed, and doesn’t suffer from various awkward limitations I found in Bento where it couldn’t quite do what I wanted. Yet it’s not overly complex or difficult to use. The developer is continually improving TapForms and is very responsive. He recently helped me import an old Bento database that I hadn’t properly exported and suddenly found I needed. TapForms will even import custom form layouts from .bentoTemplate files.

Thanks for the tip, Jolin. (I see, as a bonus, that it’s by a Canadian developer!) I am checking it out right now. Thanks again.

TapForms is an amazing program. I use it for everything from keeping track of medical data and daily logs, such as insulin daily counts, to having used it for a massive database for several conferences I was presenting which included registrations, break-out group selections and ability to create mail labels from registrations - and I used the relational database function for the latter. Also keep my fountain pen collection complete with photos on it. Highly recommend it and yes, the developer is great in support needs.

This is unbelievably good news for me. I’ve been using FM for a couple of decades to database my books and boardgames, and have always begrudged paying their high upgrade prices when I use them for such a simple task, but I created custom-designed databases a long time ago and didn’t want to change. Free personal use would be incredibly welcome - and get the software out to a lot more people. Someone new and very smart must have been put in control of Claris!

Does anyone know if this also applies to the Windows version of FileMaker?

Thanks for mentioning this! This looks like the perfect solution for saving the plant database my wife had made in Bento. Might have to explore this for the winter project of a home inventory, as well.

Does anyone know if this also applies to the Windows version of FileMaker?

I don’t see any mention of Windows in the video transcript, but it would make sense to me that it would match the Mac side.

Was thrilled when I read Article title) but I’m confused.
I don’t really care what they call it -‘Identity Confusion’ might be apropriate The only thing that matters to me is that I can “share” a database with myself on my LOCAL network:
I usually buy a copy for my desktop (FM Advanced) and 1 for my laptop . this way I open a DB which is shared from my desktop on my laptop or through FMGo on iOS devices. (thus avoiding redundant data – or endless transfer of data).
I re-read article a few times, but couldn’t figure out if this type of sharing would still be possible.
Lastly, Frankly don’t need (or want Cloud based) prefer to keep files local (thus allowing much more direct control, with local backups.

They had a webinar today where something was explained in more detail.
The FileMaker Pro product is not being renamed. Instead, there is an additional product called “Claris Pro” that will be the same as “FileMaker Pro”, but with the added capability of being able to directly reference their Claris Studio platform’s data sources.

I’ll also testify for Tap Forms. I had a very important custom Bento database for tracking the expenditures for a historic rehabilitation tax credit program that I would need to keep for the 10 years to take the credit, plus seven for possible audit. The Bento demise certainly caught me by surprise. Tap Forms brought it all over seamlessly and seeing the program continue to be supported is of course, reassuring! Now I’m on to a second rehab project, and it’s continued to meet the need.

Thanks for this. I found the precise reference: 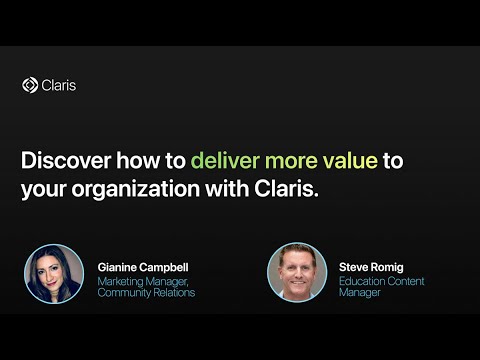 Thanks, but this begs even more questions:

I suppose we’ll learn all about this when the products finally ship.

Yeah, I find all this information coming out in webinars to be quite odd and confusing. We need a document that lays it all out for real.

Confusion abounds. Here’s a screen shot of some marketing material I received from Claris on 30 August: 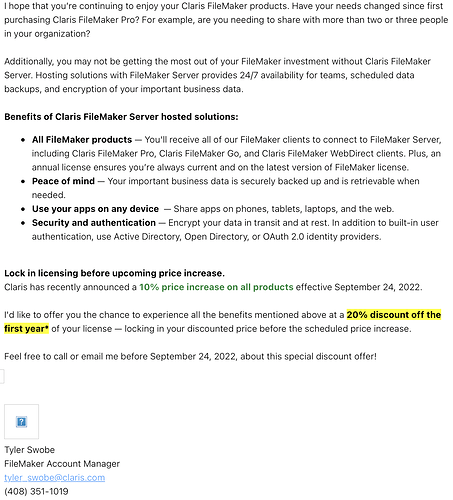 Gah! Maybe email this person and ask them to clarify what’s going on with Claris Pro and all that? Might be amusing to see what they say anyway.