So I’ve noticed this lately with a VPN workflow I’ve started having to use. VNC Viewer (by RealVNC, our campus-wide install I’m afraid) does not allow passwords to be inserted via Keychain/TouchID. In fact, most times no options show up at all by itself or if you click in the password field. Every once in a while, by clicking around (for example on the visible/invisible widget), I can get the app to appear to show password options (see below), but nothing there you could actually click on or select. Clicking the Passwords… button does not lead to anything.

Unlike most of my other apps, I’m forced to input the password by hand no matter what I do or try. Is this a problem with the individual app or does this go deeper? 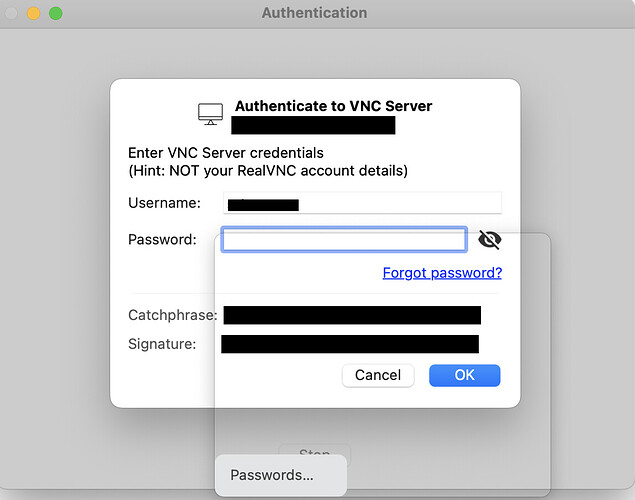 No help here, but I’m experiencing something similar with some Microsoft authentication procedure recently imposed on a school email account. I get a password screen in System Preferences > Internet Accounts and I need to enter the password. The one difference is that I can paste, so I’ve saved my password in plain text on the Mac, and when I need to enter the password, I copy and paste it.

It’s the app. It’s not written in a compliant way. Probably using Qt or some other cross platform toolkit, so not fully native. Complain to RealVNC.

So let me then ask this question: any good alternative clients out there? A very long time ago I remember stuff like Chicken of the VNC but it looks like that isn’t being actively developed anymore (nor its replacement Chicken). I also recall JollysFastVNC, but that appears to be a bit costly and I can’t even get the trial to work.

How about the Screen Sharing app that comes with macOS? I thought it was a VNC client.

any good alternative clients out there?

When I started having problems that I blamed on Cisco AnyConnect, I ditched it and started using Shimo. For me, it does the job, although the developer’s response to a query was terse in the extreme. After using it briefly, I posted comments. When I want VPN, I still use it.

So did I. But it’s claiming it’s “incompatible with the version of screen sharing being used by the host”. My guess it’s the authentication.

Thanks, but VPN ≠ VNC.

That’s likely. Apple screen sharing is based on VNC. You can launch a session in one of three ways:

But, as you’ve pointed out, this may not work if the remote server doesn’t support compatible authentication. VNC’s password and data is not encrypted unless the session is tunneled through an SSH session and Apple’s client won’t automatically create such a tunnel.

If you have a VPN connection to the network where the VNC server is running, it’s probably secure enough, but if the site administrator wants end-to-end encryption, you probably need to use a different client.

If your remote server is expecting VNC over SSH, you may be able to manually create a tunnel and then use Apple’s VNC client over that tunnel. Based on an Apple discussion thread:

A shame you spent all that time writing that up because that’s entirely beside this problem. The SSH tunnel was already set up and it works just fine. The problem is what you run through that tunnel and that Screen Sharing is not just any VNC, or rather there is not just one plain vanilla VNC that SS can just deal with. As I’ve been able to verify, SS—unlike VNC Viewer—fails to open to user@localhost:59xx even though RealVNC server is running on the remote host and serving up on exactly 59xx what it’s supposed to. The actual question here is not how to set up a tunnel or launch SS or any of that other stuff. The question is simply what client aside from RealVNC’s own could negotiate the connection. It’s possible the true answer is none due to some proprietary nonsense. But until I hear that, I’m looking out for good alternate client suggestions.

The question is simply what client aside from RealVNC’s own could negotiate the connection.

I remember similar issues connecting to my Raspberry Pi. It includes a build of RealVNC’s server and I found that open source clients would not connect to it. I suspect the RealVNC people changed something to deliberately break interoperability with open source builds (many of which were forks from RealVNC’s open source releases).

In the case of my Pi, it didn’t matter, because I ended up configuring it to not run a GUI at all. All my access to it is remote, so I run an X11 server (XQuartz) on my Mac and then SSH to the Pi with the -Y option to forward X11 over the tunnel.

My other Linux box (a PC running Debian) runs the TigerVNC server (a fork from TightVNC) which has no problem accepting connections from Apple’s VNC client.