Big Sur Is Here, but We Suggest You Say “No Sir” for Now

I’m sure there’s fancier solutions, but in the end I opted to just export my most important mailboxes to .mbox files. Take any folder in Mail.app and select Mailbox > Export Mailbox… (or right click).

There have only been reports of mail being lost if you have moved them to a separate folder on your Mac. If all your mail is in a cloud (iCloud, Gmail, etc.) then I have seen no issues reported.

And I have not heard of any recent problems, so the current versions of Catalina and Big Sur have seemingly solved those earlier issues.

That’s true. For those who use Mail, there still seem to be problems. Check out the comments at the bottom of @mjtsai’s article.

The article and comments Adam mentioned a few days ago show that Mail problems were still continuing in the last Catalina release and likely in the initial Big Sur release.

Simon: What did you do with those mbox files afterwards? Did you re-import them to Mail? Just keep them as an archive? Use them with some other program?

Fortunately, I never had to resort to using them because I didn’t encounter any Mail issues. If I had lost email my plan was to restore folders with saved .mbox content via File > Import Mailboxes… and then select “Files in mbox format”. I had used that many years ago after I had accidentally deleted a couple emails and it worked like a charm.

In the old days I’d probably submit this as feedback, but after all the discussions we’ve had here, it feels like Apple doesn’t really care about getting that kind of feedback there.

I think it’s always worth submitting—it may not get listened to, but it will be a data point. 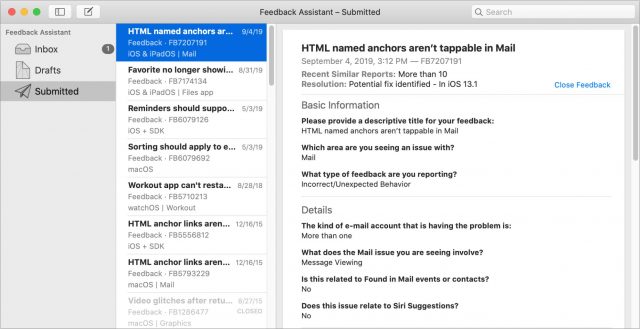 How to Report Bugs to Apple So They Get Fixed - TidBITS

With another WWDC behind us, that means it's beta season, with new versions of macOS, iOS, watchOS, and tvOS for developers brave enough to test them. Former Apple engineer David Shayer explains what you need to do to increase the chances that Apple...

I think it’s always worth submitting—it may not get listened to, but it will be a data point.

It depends on what you report. I’ve reported things that are clearly critical bugs, including steps to reproduce the bug (always important for the support team assigned to deal with it). On one occasion, I was contacted for additional information, but on many occasions, I found the fix in the next system software update.

For less important things that don’t actually break functionality or create a security problem, they are going to be low priority. But if enough people report the same thing, that increases the priority and therefore the odds of it getting fixed.

Just make sure you have personally encountered the bug. Don’t report something simply because you read about it and it sounds important to you. You don’t want Apple to get the impression that the reports aren’t all genuine, because that would undermine the purpose of reporting them.

To paraphrase a line from West Wing, change comes from those who show up.

Despite the warnings here, I’ve upgraded both my systems (2018 MacBook Pro and 2020 iMac) to Big Sur. The interface elements are a bit cartoony but I’ve encountered no serious bugs so far. The biggest thing I’ve had to deal with:

Note that I upgraded from Catalina. The only red flag issue I’ve seen raised is the initial inability to create a bootable clone. For myself, I regarded that as minor, as my typical way to restore a system has been to install a new system from scratch and then use Migration Assistant to move my data from a clone. Whether the clone is actually bootable is not an issue, and the latest news is that Apple supposedly has a fix that is being tested in the latest betas from Carbon Copy Cloner (my favorite clone creator).

One of (or maybe the biggest) of Apple’s criteria for “fixing” things is how much does it reduce support costs. They are ruthless is looking at what creates calls and visits to stores. Those items go to the top of the list.

The example I like is the ~/Library folder. People were seeing it and going in and messing with things and many times wreaking their use of the system. So Apple removed it from the Finder. You had to “go to it” go get there. Which created its own huge volume of support calls from people who had a real reason to go there and now had trouble getting there or worse yet talking people over the phone into the folder. So now it’s an option in the view window IF IF IF you have a user top level view open. So basically if you don’t know what it is you don’t miss it. If you do you can enable it.

I’ve popped Big Sur on my laptop. I’m impressed with it actually. It feels more like iOS in one regard in particular, the whole thing hangs together more as a unified experience. Coming back to Mojave or Catalina definitely feels like an assemblage of older technologies.

how does one replace new icons with old ones? (where possible).

You can also copy images from the Get-Info window. You can then paste them into your favorite image editor, make the changes you like and then copy/paste them back to the file/folder you got them from.

For example, many years ago, I took Apple’s then-standard folder icon and modified it in order to make one for my Games folder: 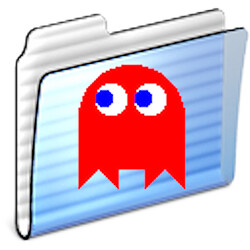 Big Sur apparently poses new challenges for prepress pro’s or anyone who wants to remove or disable Apple-supplied fonts. See the Big Sur section of this.

There’s a lot of excellent advice here about font management even if you are not planning to disable anything.

(a) windows. I have an external monitor and as soon as it kicks on, all the windows for everything are off screen. Like there’s 1% of the window hiding on the left and that’s it, and it doesn’t appear on the laptop’s screen either (MBP 2017). I have to drag them over to the monitor, every single time.

(b) A lot of the controls that used to be at the bottom of the page (mark read in Reeder) is now at the top, so you’re scrolling down and now you have to move the arrow to the top of the page to mark stuff read. I’ve seen this change in more than one program so I assume it’s part of new UX/UI guidelines by Apple. I think it’s annoying.

I’m also having problems with my Apple Time Machine capsule but that might be a different issue.

The ‘All’ mailbox collections still are selectable in the Smart Mailbox creation and edit dialogs. So you can recreate the ‘All Junk’ mailbox as a simple Smart Mailbox with the condition ‘Message is in mailbox’ and then select ‘All Junk’ in the dropdown menu.