Thanks to one of my professors, I subscribed to Dropbox a few years back for my first cloud service. It worked well for a while, but with their problems updating to handle OSX Monterey 12.3 requirements, Dropbox is no longer working for me. Several TidBITS members have recommended Backblaze, so I’m evaluating it. I had some questions so I contacted them, here are my questions and their answers. Does anything sound incorrect?

Everything Backblaze said makes perfect sense. I think I’m getting the impression, though, that you consider Dropbox and Backblaze to be competing products in the same space. If so, that is not really true. Although they both store your files in the cloud, Backblaze is primarily a backup utility, and Dropbox is primarily a file sharing utility.

For syncing, I’ve switched from Dropbox to Sync.com and I’m pretty happy with their service so far. They do have iOS and iPadOS clients and you can access your files on their service from the stock Files app as well. I do have a few files on Dropbox as a free customer (mostly items shared from others on Dropbox) but I use the Maestral app on MacOS for Dropbox. It’s not a perfect replacement, but it works just fine for my purposes.

I agree that Backblaze is a completely different product (though I suppose you could use Dropbox as a backup service, it would be pretty difficult unless you put all of your files, including your music and photo libraries, in the Dropbox folder.)

Hi Jeff,
Thanks for confirming the Backblaze answers. I didn’t know the difference at first. Now that I’m graduating, I don’t need to do much file sharing so now I’m looking for a cloud backup solution. The reason I asked questions in relation to Dropbox is because Dropbox is what I know.

Hi Doug,
I actually was using Dropbox as a backup solution. Since Dropbox managed the backup, it moved all of the folders I was backing up into the Dropbox folder. It was a bit of a kludge, but I was busy with schoolwork. It worked fine until a few months ago, when their client software received an update that removed the ability to store folders primarily on one’s hard drive. I first noticed it when the Music app couldn’t locate my library. Thankfully I also do local backups, so I didn’t have difficulty accessing my files. Dropbox customer service couldn’t help me, so I left everything as is until I completed my graduation paper. With that behind me, it’s time to fix this.

From what I see in the Dropbox forum, it seems like they’re still having trouble adjusting to OS 12.3. Is this why you left?

Now that I’m graduating, I don’t need to do much file sharing so now I’m looking for a cloud backup solution.

Makes sense, and congratulations! You’ll find the question of “which cloud backup solution should I use?” has been discussed at great length here previously. You may want to read through those discussions to help you make a decision. For example this one:

Hi folks, I’ve been using Arq for a number of years since CrashPlan’s demise. Generally it has worked fine. But it seems to have a performance / optimization problem. A typical incremental run can take 10 hours, thought it varies widely. Depending on when the runs take place, the iMac can effectively be backing up ALL THE TIME. And in spite of the options to Throttle Disk I/O and other resources, I almost always have to pause it to keep my iMac from being unusably slow. Here is a sample run wi…

Back at the time of the Great CrashPlan Debacle, I looked hard at the pros and cons of switching to Backblaze. What kept me on CP for the time was mainly their unlimited deleted file retention policy. They are now changing that to 90 days. Still better than Backblaze (30 days), but a big enough change that I’m revisiting the question. CP is also more expensive (I back up five Macs). Interested in any further comments on this choice before I make a decision. Thanks!

It worked fine until a few months ago, when their client software received an update that removed the ability to store folders primarily on one’s hard drive. I first noticed it when the Music app couldn’t locate my library.

That may be a misunderstanding of how Dropbox now works. They did something similar to Apple iCloud where if you choose an option to “save space on your local drive” they will keep all your files on the Dropbox server and serve files back to your local drive when you want them. It appears to leave files with 0 bytes of information on your local drive—which was the crazy way I encountered this as all my older (but still valued) files suddenly seemed empty.

But…you can still choose to have local storage of any and all files, and I must say I don’t feel any more comfortable with Dropbox doing this than I feel with iCloud doing it.

Good luck figuring out how you want to proceed (and congratulations on graduating!).

But…you can still choose to have local storage of any and all files, and I must say I don’t feel any more comfortable with Dropbox doing this than I feel with iCloud doing it.

Thanks for your comments. This is actually how I was managing things with Dropbox for the longest time, first in my 2010 vintage MacPro with 4TB hard disk, and then in my made-to-order M1 Max with 4TB hard disk. I had set up the Dropbox software settings numerous times. As Dropbox added to its ability to backup different folders, I regularly went back to the settings to add new folders, but always made sure that the files would remain on my hard disk. I even checked this setting last year on a couple of the Macs at the office I was then working at. Then, one evening last April, out of the blue, my Music app couldn’t find my library, which led me to investigate and discover that over 2TB of files that were supposed to be backed up to the cloud were now resident in the cloud, with those zero byte placeholder files on my computer. This is what the Dropbox preferences pane looked like after the problem started: 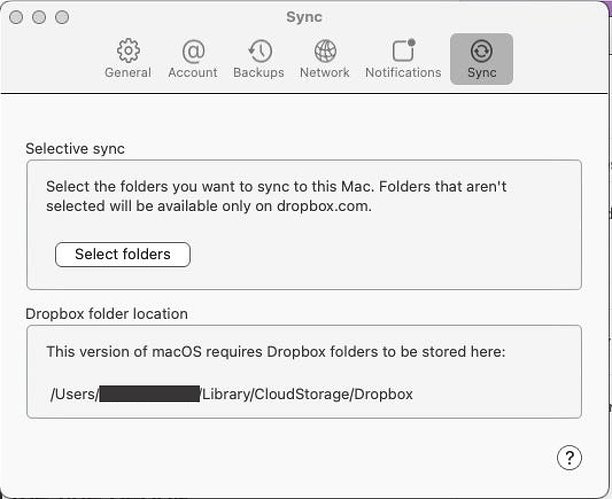 You’ll notice that there are only two sections. The third section, where one could select to keep the files locally, is missing. You might want to check your own preferences. I contacted Dropbox tech support by chat, and after I explained the situation and uploaded this screenshot, the gent told me that he would get back to me by email. I haven’t heard anything in the subsequent 3+ months. Since I was busy with classes and doing extensive research using this computer, I didn’t want to screw up the machine any worse than it was.

Are you using OS12.3? Dropbox sent an email to all users about a year ago to let us know that they had not yet updated their software to work with 12.3. They recommended that everyone who opens and works on remote files from their Finder window to delay updating to 12.3. Since I had always retained local copies of files, I went ahead and updated to 12.3 before the semester started. It was perhaps a month or so later that this problem occurred. The lack of response from Dropbox tech support and its apparent continuing problems with 12.3 give me no confidence in Dropbox, which is why I’m investigating alternate solutions. I hope it continues working well for you.

There are definitely some things you should do here. Both your macOS and your Dropbox versions are seriously out of date.

One thing you are missing is the selector for “Storage of new files”—which is very different from the “Selective sync” feature that we’ve both been using forever. In order to get Dropbox working when I applied MacOS 12.4 last month, I had to allow Dropbox to apply beta versions of the Mac client software. Normally that gives me the heebie-jeebies, but have not noticed any problems. I am now on MacOS 12.5, and unless you have a really good reason to be avoiding it, as long as you are on Monterey, you should be, too.

This is what the current Sync preference looks like in the Mac client: 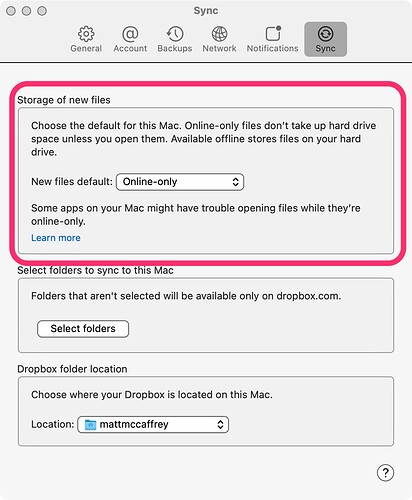 I’ve highlighted the box that is missing in your older version of the client. This is what I mean when I say that Dropbox now behaves like iCloud in the sense of storing new files online by default. This goes beyond the “Selective sync” model of choosing certain folders that won’t be synced to your local machine. In that model you cannot even see those folders on a given machine.

My strong suggestion is that you update Dropbox (for features) and MacOS (for security), then figure out what you want to do from there. And of course I can’t speak for Dropbox support or their responsiveness. The one time I had a case with them was about 3 years ago, and they walked me through a potentially catastrophic loss over the phone. The circumstances of that event persuaded me that Dropbox is not a backup solution, but it remains an excellent medium for keeping files synced among a number of different devices.

Good luck and let us know how it turns out!