AT&T and Verizon have started using C-band wireless spectrum that will speed up their 5G cellular service and make it available to more customers. This important step in 5G’s overall evolution brings AT&T and Verizon more in line with T-Mobile, which has had an edge in available spectrum until now.

The FCC’s authorization should have been overruled by the FAA to ban 5G transmissions within a 10km radius around all military and commercial airports. The cell carriers don’t care about safety, just money.

Haven’t 40 countries been able to implement 5G successfully?
We should be able to respond more quickly and safely to technology than most other countries - it provides a competitive advantage.

Regarding the FAA and FCC disagreement over this new 5G rollout near airports, Jason Snell linked to a very good explanation from James Fallows, also discussing the differences between Europe and Australia and now Verizon and AT&T in the US.

The 5G Airline Controversy: What Is It About?

It could be an issue. But it will probably be resolved soon. What to know the next time you hear it come up.

In tech people have tended to focus rather much on the network side of this issue. If you guys are interested in hearing a pilot’s perspective on this, I can recommend Patrick Smith’s take. He’s a life long airline pilot for one of the big US three, piloting 757/767 based out of BOS, and has been blogging for years (since the release of his first book I guess). 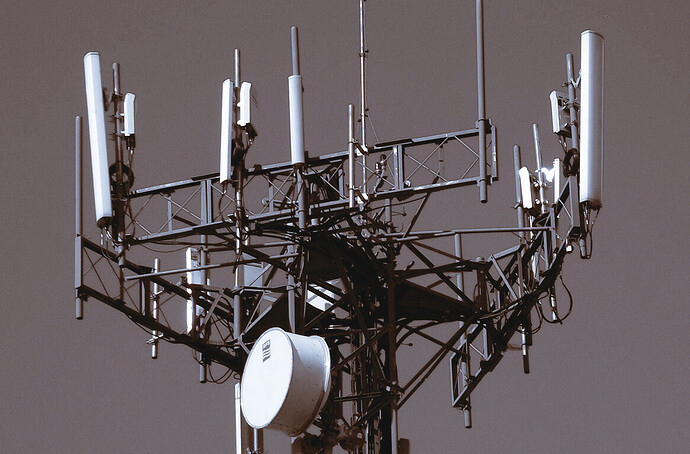 What All the Fuss is About.

From what I’ve read, in the EU their 5G is at a much lower power level than what US cell companies use. Perhaps if the FCC ordered the power to be reduced to the levels in the EU, that might be sufficient safety-wise; but as long as the cell companies insist on their much higher power, then a 10 Km safety buffer zone should be required.

Yes, there appear to be significant differences in the bands, power levels, and even antenna design between countries. From the link posted above, this pic provides an interesting comparison just between France and the US. 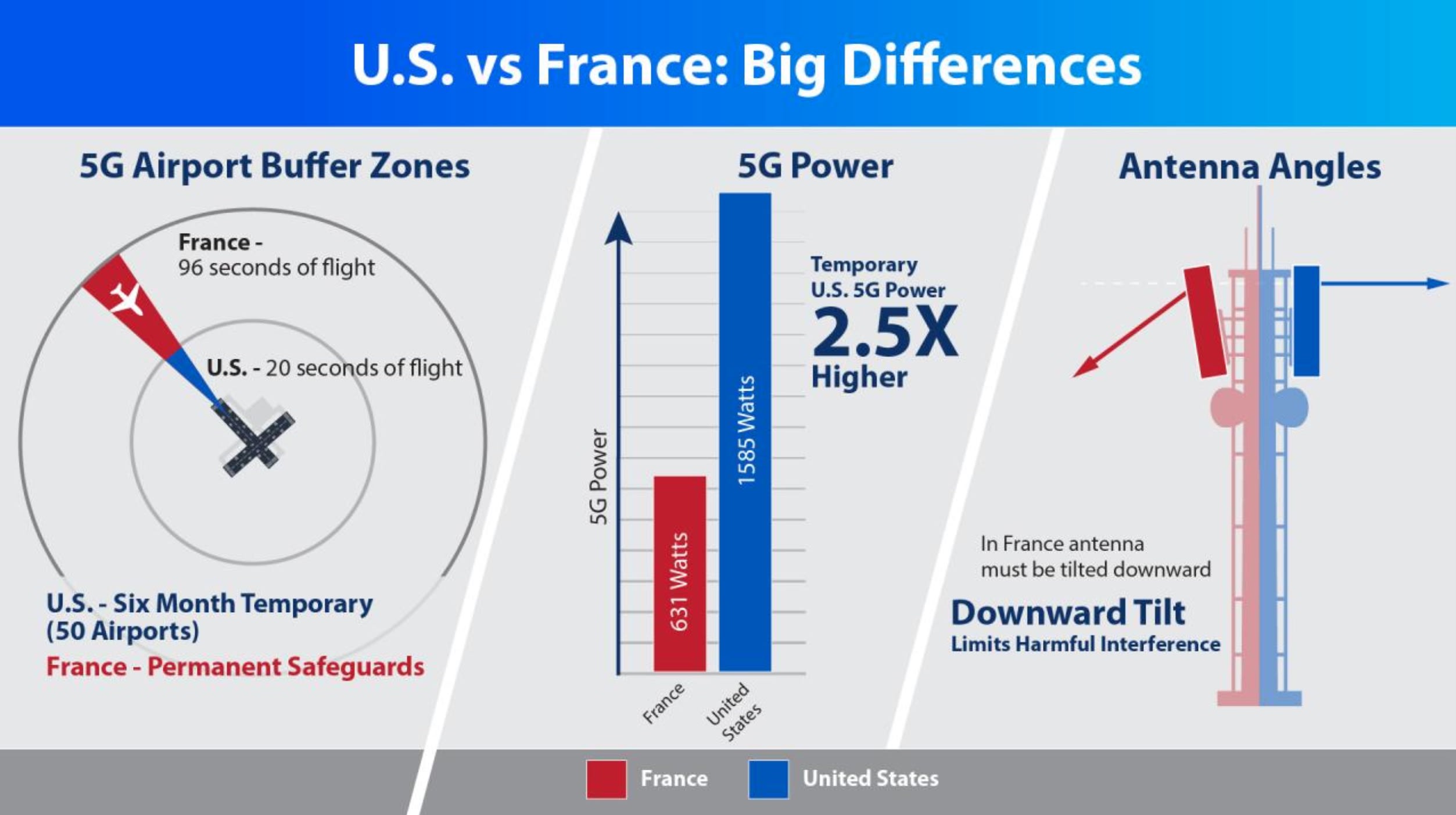 Note also that buffer zones around airports, as mandated in France, is now what the carriers and the FAA have essentially agreed to. This will not last forever, but it does give the FAA more time to certify equipment and determine which altimeters will need to be replaced or modified. There undoubtedly will be some required modifications. The good news is that the bulk of aircraft (by pax volume) in the US have already been cleared, with some not getting a green light until last week though, hence some of the drama.

Saving grace perhaps is also that radio altimeters usually start giving highly accurate reads around 2500’ AGL (at high altitudes pilots [and their systems] rely on barometric readings to determine altitudes) so the buffer zone required to ensure absolutely no interference is by nature limited.

Yes, there appear to be significant differences in the bands, power levels, and even antenna design between countries.

From the IEEE article linked in the article I listed above:

Currently, Ireland, Denmark, and Finland have operating 5G networks with midband signals that are more powerful than approved in the United States, with no effect on altimeters.

And I believe that Australia has the same band spread as used by VZW and ATT in the US. That said, it’s probably better to be careful until you’re 100% sure it will not be a problem, so the current move by VZW and ATT to hold off near the 50 airports is probably smart.

The whole reason for the debate is that the FAA is more interested in safety than anything else…and if they haven’t proved it’s fine then they assume it’s not fine. We used to have the same thought pattern back when I was in the nuclear submarine biz. Back then…there were things that were proven safe and everything else was considered unsafe…this is opposite the more normal way of thinking in that assume it is safe unless it’s proven not to be.

The FCC has different interests…they’re interested in faster communications and supporting the spectrum usage that companies paid for.

Nothing wrong with either approach…they’re just different.

However…with the number of countries that are using 5G and the absence of planes falling out of the sky seems to be a point in favor of the tech being safe…but the FAA still has to verify it. That’s all fine and dandy…but the spectrum was auctioned off months or years ago…one would think the FAA would have spent the intervening time answering the question for themselves rather than waiting until essentially the last minute and then demanding concessions from the phone companies.

The phone companies have given them another 6 months…and if the FAA is still sitting on their hands after that then it seems like an FAA problem to me.

I’m happy for safety…but like a lot of other issues these days a little common sense might go a long way.

The whole reason for the debate is that the FAA is more interested in safety than anything else…and if they haven’t proved it’s fine then they assume it’s not fine. We used to have the same thought pattern back when I was in the nuclear submarine biz. Back then…there were things that were proven safe and everything else was considered unsafe…this is opposite the more normal way of thinking in that assume it is safe unless it’s proven not to be.

The FCC has different interests…they’re interested in faster communications and supporting the spectrum usage that companies paid for.

These inter-agency conflicts probably happen more often than you’d think. The EPA and DOT’s gas can regulations directly contradict each other, which is why a store will have plastic cans with safety nozzles (EPA regs) and metal cans with simply nozzles or just a pour spout (DOT regulation).

Thankfully, and of relief to many airlines:

A few linked articles, for those interested in details regarding what’s going on:

Verizon sent me a Samsung phone with its mid-band service on it, and I am getting consistently good speeds.

I’m not seeing anything approaching the 1 gigabit per second the carrier is claiming under peak conditions, and I never cracked 400 megabits today, but consistent downloads in the 350 megabit range are not too shabby.

This closely aligns with the speeds I have recently seen when using T-Mobile’s mid-band data service.

Note: I conducted my C-band testing indoors, within my home office in St. Paul’s urban core, but away from any of Verizon’s high-band/mmWave hotspots.

Not surprisingly, upload speeds suck (but, for context, they’re much better than the ones I get with my Comcast Xfinity wired broadband). 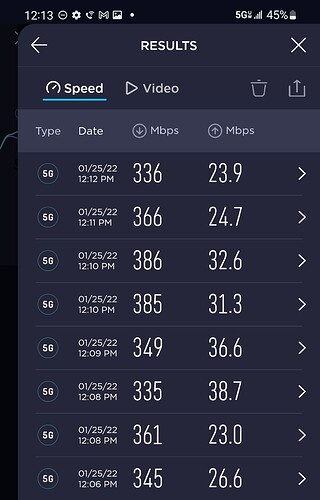 Really? Try the 250 kbps (note the “k”) I’m stuck with given the DSL I was limited to, until fixed wireless brought me all the way up to 6Mbps. This 5G stuff is looking like a gift from heaven, given the lack of cable in my (suburban) area… The download speeds you’re showing are about 20x what I get.