I have been an early adopter of every even-series Apple Watch. However, I don’t find the hardware improvements in the non-cellular version to be worth getting. Car crash detection is also a feature of the new iPhone series, and the only announced application for the temperature sensing app doesn’t apply to me. Everything else new will apparently be in software. So, this looks like a pass for me.

Despite all the hype, optical heart rate recording, whether by Apple, Polar, Garmin, or other is still inaccurate. Can an Apple watch be paired with a chest transmitter from Polar or other manufacturer using ANT+ and/or bluetooth?

Can an Apple watch be paired with a chest transmitter from Polar or other manufacturer using ANT+ and/or bluetooth?

Yes, BT rather than ANT I’m fairly sure, and it has been able to for years. For example, Scosche makes an arm strap heart rate transmitter that works with the AW. (Thats not how they market it BTW).

I’m planning to upgrade from my S5 this year. I don’t necessarily need the advanced features of the Ultra, but I like the bigger battery and the price isn’t that much higher than the S8 in stainless, which is what I’d get. Battery health on my S5 is 86%, so it can be a challenge most days to get through without at least topping up at some point. (IMO the Ultra is a little ugly, and I’m worried that it would be too big.)

I’m away from home and haven’t seen the presentation or videos but I’m home tomorrow so I’ll try to decide in a couple of days.

It will be interesting to see how the Ultra pans out as a dive computer. I didn’t see any mention of when the enabling app (Oceanic+) will be available or how much the subscription will cost.

Right now I’m using a very low end Suunto Zoop Novo, which does the job, but it would be nice to have something with a more dazzling display, a compass and integration with an iPhone app. (I currently use Subsurface, which also does the job.)

From Wired: “The Ultra is also designed to become a full-on wrist-worn dive computer. It meets recreational dive standards for waterproofing and has a new depth gauge. When it debuts this fall, the Oceanic+ app (designed in partnership with Huish Outdoors) will let divers see a decompression timetable, dive planning, a logbook, and other features serious divers need.”

I wear my Watch during the day and charge it at night, so sleep tracking is a no go (charging just takes too long to do it in the morning after getting up). Since you can pair several watches to your iPhone, I am wondering if you could use one Watch during nighttime for sleep tracking and another one during daytime for all the other stuff?
Anyone here with real world experience wearing 2 Watches and how that integrates within the Health app?

Since you can pair several watches to your iPhone, I am wondering if you could use one Watch during nighttime for sleep tracking and another one during daytime for all the other stuff?

Yes! I did this with my old Series 2 overnight until the S2 stopped getting watchOS updates.

I’ve also done things like wear the S2 while I am doing dirty work (e.g., sanding and painting). The health app integrates the two sources perfectly. Sometimes it takes a little bit for the watch to sync data from the health app when you first switch (so, for example, it’ll be a few minutes before the activity app realizes all the activity you’ve done with the other watch.)

When I upgrade (I’m still not sure which of the models I’ll order) I will likely use my S5 as my sleep tracking watch.

Also, the S7 and S8 models do have fast charging. I can’t tell you from experience how fast they work, but I’ve just been traveling and charging my S5 when I wake. When I wake up the watch is typically at about 83% charge, and after 30 minutes it’s well past 90%, sometimes it’s fully charged. (I do charge the watch about an hour before I go to bed each night so it’s fully or nearly fully charged when I go to sleep,)

Had not had this idea…but if we trade up from our S5s we will likely do this as well now that I know about it.

Also, the watch app is very good about noticing that you have changed watches automatically. Also, you can have multiple watches set up to unlock a Mac.

Hmmm… I might have some bad news for my wife who has an eye on my S4 for her surfing and activity tracking.

I don’t necessarily need the advanced features of the Ultra, but I like the bigger battery and the price isn’t that much higher than the S8 in stainless, which is what I’d get. Battery health on my S5 is 86%, so it can be a challenge most days to get through without at least topping up at some point. (IMO the Ultra is a little ugly, and I’m worried that it would be too big.)

I watched the announcement last night. I still can’t decide on the Ultra or the stainless S8. In addition to the large case size in height and width, the Ultra is quite thick compared with the S8. One thing I discovered about it is the fact that there is small titanium bezel to protect the crystal, plus screws holding the case closed. I hope that one day these two features make their way to the regular watch series. Screws rather than glue holding the watch together I think could help with repairability and/or battery replacement, and I’ve long thought that the watch would be better if the glass was protected and flat across the case, like most/many normal watches. The price difference is $70 with AppleCare+ (AC+ is $20 extra for the Ultra compared with the S8.)

I am leaning toward the Ultra. At this point Apple is promising delivery in late October (they almost always deliver earlier than that, so probably a week or two before that). I’ll decide I think by Monday.

Use of the Ultra as a dive watch is an interesting development. There are some online reviews by professional divers with differing views. The proof will be in the pudding.
It seems to have a water temperature sensor which would be useful. Maybe it also detects air temperature (or have I missed something with recent watch models?)

I’d like to read some of those diver reviews of the Ultra. Can you tell us where you saw them?

I decided to get an Ultra. Right now, delivery is listed in early October. I’ll probably never use the new fitness stuff (I have Garmin devices for that), but the reason I decided to get an Ultra is the battery. I’ve gone from 0->3LTE->5LTE->7 (non-LTE, I decided I didn’t use LTE enough for it to matter). The reason I get a new Apple Watch is usually that after 2 years the battery in the old one is fading, and I can no longer get through the day without giving a boost at some point. I’m hoping the extra battery capacity will let the Ultra last for 4 years or so.

Here are some links for divers:
Watch ultra 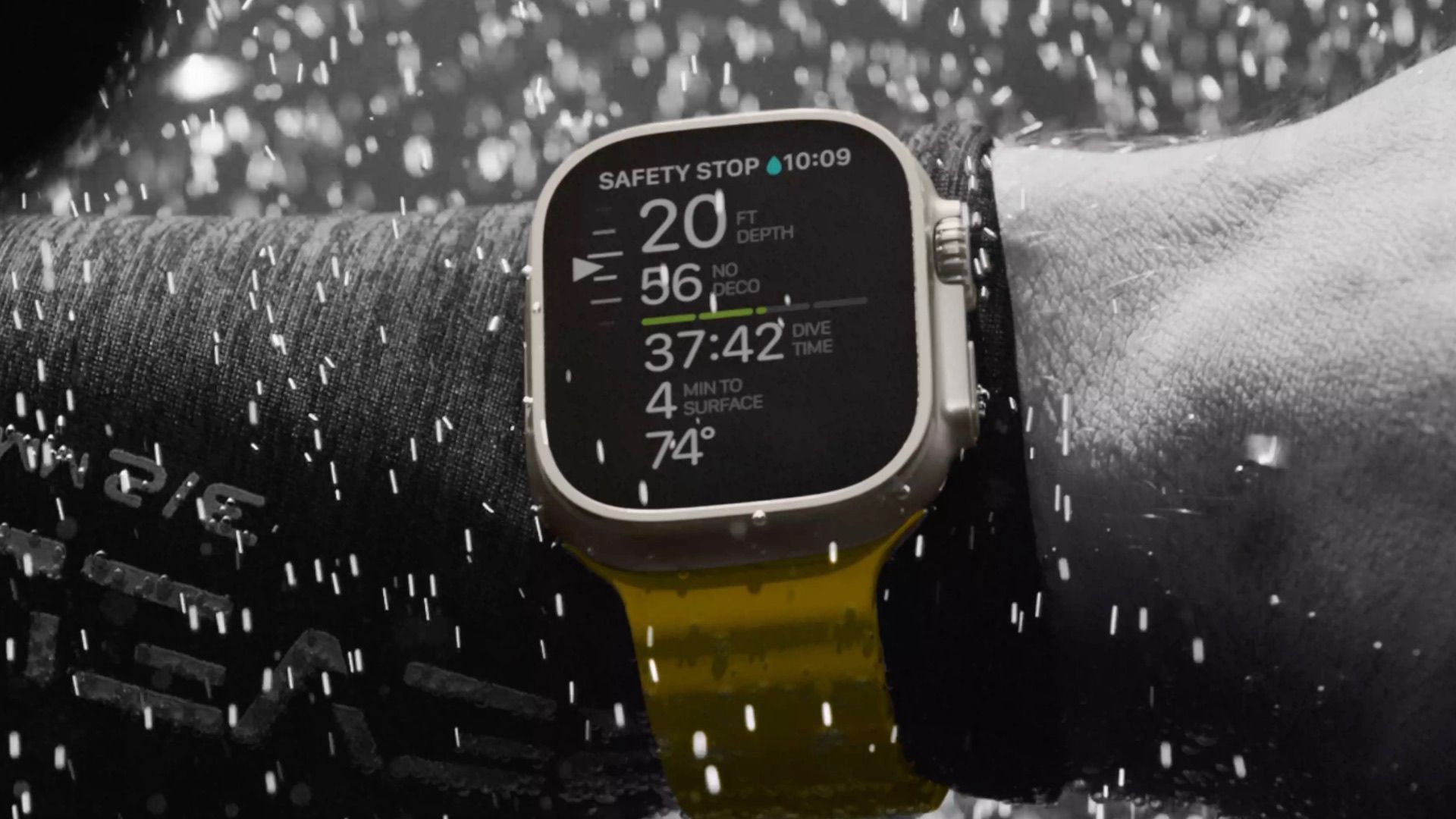 The new Apple Watch Ultra features the ability to measure the temperature of the water as you're diving, swimming, and doing a range of other... 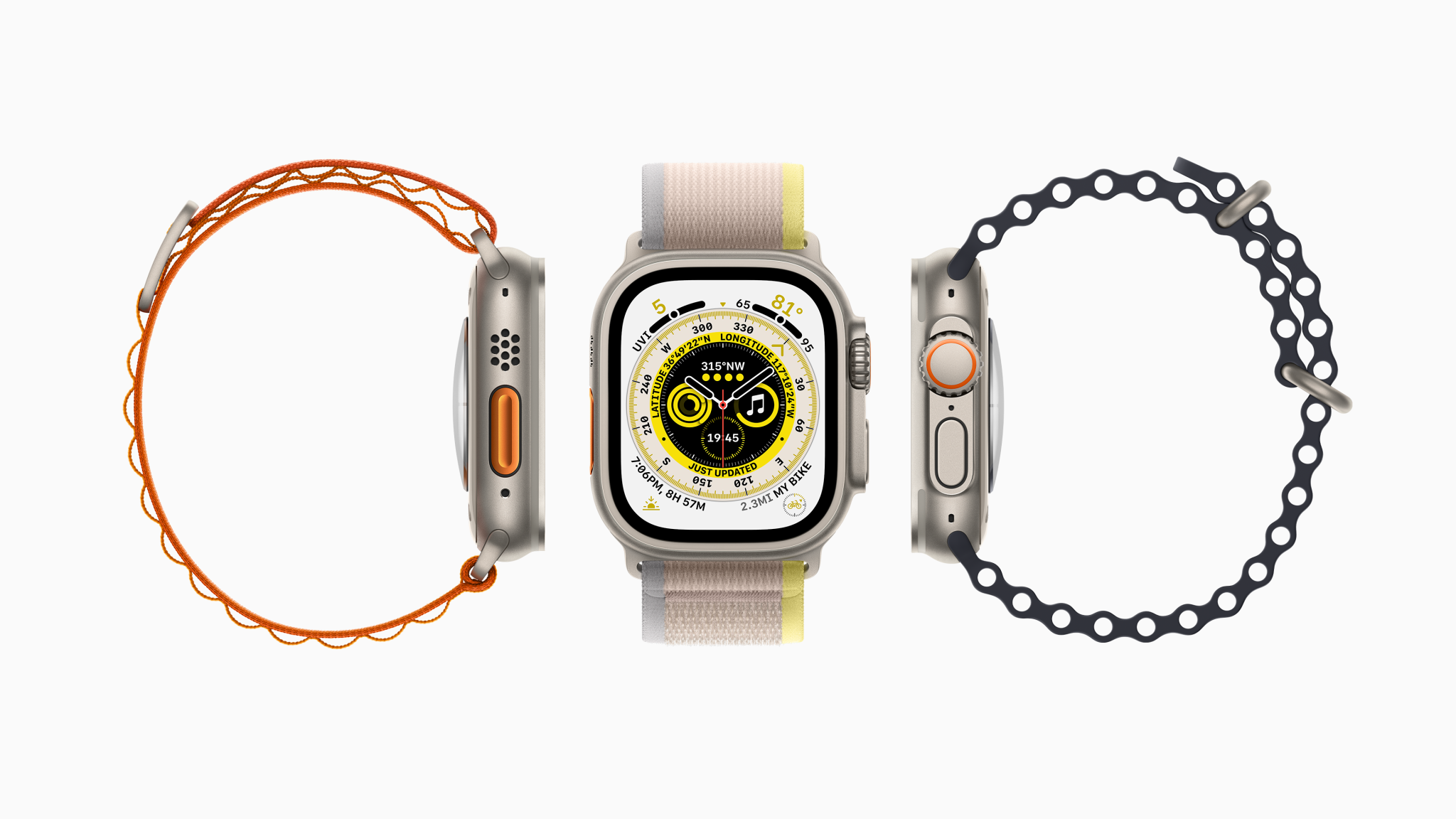 Inspired by the most extreme activities, Apple has unveiled the Apple Watch Ultra, which brings a new bold design and a wide range of features built for endurance, exploration, and adventure. Apple Watch Ultra introduces a 49mm titanium case and...

The Apple Watch Ultra, which goes on sale on 23 September, can be used as a dive-computer at depths down to 40m with the addition of a new version of the Apple unveiled the Watch Series 8 at Wednesday's "Far Out" keynote. The good news is that there is a standard version. The more affordable SE model also...

Gruber’s review of the Apple Watch Ultra at Daring Fireball.

It *almost* feels more like having an adorable little iPhone Nano strapped to my wrist than a huge Apple Watch.

Inaccurate? You might want to take a look at this video by a post-doc researcher in bioinformatics…
Apple vs Polar vs Fitbit: Scientific Heart Rate Research
I no longer (need to) use my Polar H10. In my limited use experience of indoor rowing, my Apple Watch 7 is always within a bpm or two of the H10. Of course depending upon multiple factors ymmv.

Hello Jonmcintosh - thanks for that (and for providing a link with a decent scientific study*)- that’s a significant improvement on the last study I saw, albeit a few years back. Based on a very quick look at the video, I’ll have to revise my opinion on optical HR recording (at least for Apple). Although I’d like to get hold of the published study too.

Anecdotally, I’ve been a Polar user for >30 years. The chest transmitters (H10 and predecessors) have been shown to be accurate (and used for the ‘gold standard’ - above*), but I find the optical HR recording to be way less accurate, for me at least, based on my own little ‘quick tests’ using the H10 for comparison. So, personally I’ll continue with a chest transmitter for a while yet, but I can see the value of optical recording for others.

Slightly off topic: I’m not surprised at all about the energy expenditure (EE) results. Each of the manufacturers have their own proprietary (closely guarded) algorithms - and use HR, mass, age etc to determine EE. EE estimates are ‘fraught with peril’ and until they start conducting scientifically validated tests using doubly labelled water/environmental chambers or similar, I don’t see them getting much more accurate. Over many years, I’ve worked out a system for myself (definitely NOT scientific :) ) whereby I first subtract KCals based on the time taken (e.g 175 KCal/hr) , to give me an estimate of my net EE during exercise. Then depending upon the type of exercise I further reduce this based on a percentage of my average HR recorded. It works for me and I’ve now been weight stable for years - I wouldn’t presume to tell anybody else how to do this other than, perhaps, the usual caveat - just because your recording device says you’ve burned X KCals/KJ it doesn’t mean you should rush off and compensate by eating an additional X KCals/KJ

I am appreciative that the “The Quantified Scientist” also tested the heart rate relative accuracy during activities such as indoor/outdoor cycling and weight training which showed that generally, the more watch movement the less consistency with the Polar H10 results but still overall, quite good results. What was amazing was that there were so many of the watches he tested that had such poor results compared to the H10! 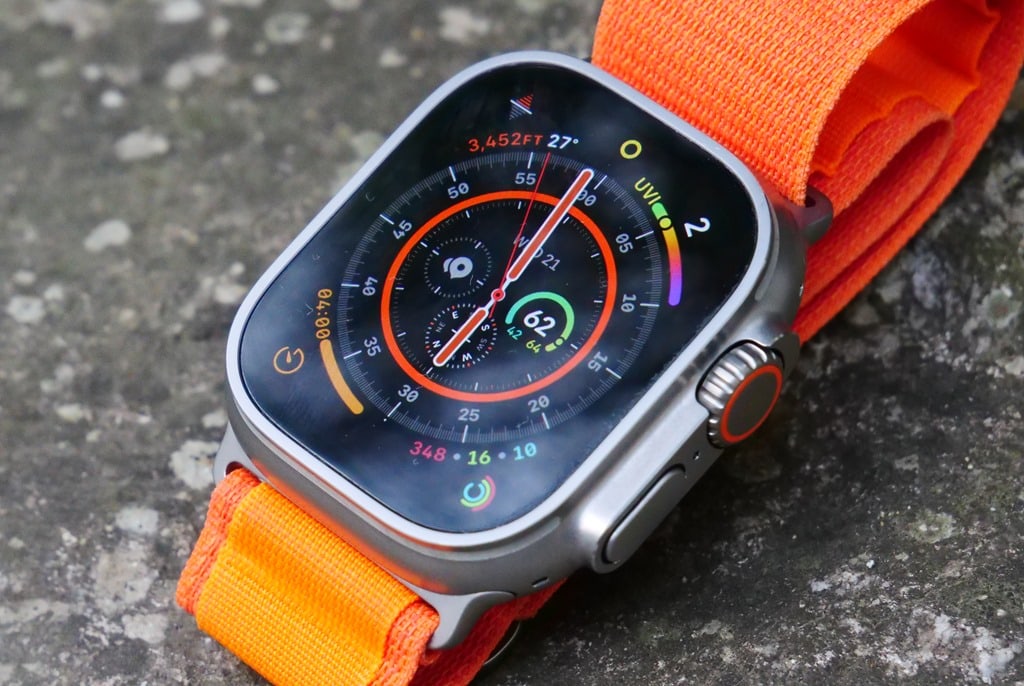 The Apple Watch Ultra is Apple’s real first foray into a watch suited for endurance sports, and other sporty adventures. Sure, Apple’s WatchOS 9 update for many of their other watches, including the recent Apple Watch Series 8, has brought