Apple Takes macOS to Big Sur… and to 11

To me, the version numbering has been nonsensical, and this upcoming version should be either MacOS 15 or 17. The following would have made more sense:

I just notced in that first pic, I have a hard time discerning which window is foregrounded. It’s obvious Safari is at then back, it’s dimmed overall. But then there’s the iCloud Finder window which has solid dark black heading, but that’s not the foreground window. Mail is. Is there more than the traffic lights to tell?

Other than that, I don’t mind the new deign. The icons look a bit toy-ish, but the windows look clean and sleek. It looks very very bright though. Is this Apple’s ‘nudge’ for Dark Mode? I’m a bit put off by Apple’s choice of desktop background. Big Sur would have offered many awesome vistas for that.

I wonder what vintage Mac the cut off will be.

Basically ≤2012 means no dice. Details below. 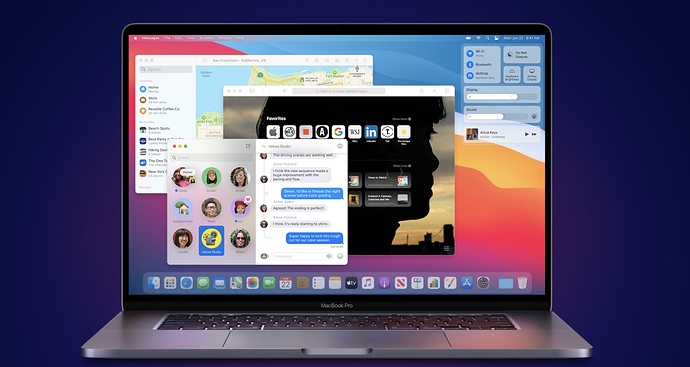 Apple today previewed macOS Big Sur with redesigned interfaces such as the Dock and Notification Center, the addition of a Control Center, several...

To me, the version numbering has been nonsensical, and this upcoming version should be either MacOS 15 or 17

Any jump in the sequence will confuse most users. If you’re going to do that, then you might as well sync it up with the Darwin kernel version, since that’s already used as the prefix for macOS build numbers. That would make Big Sur version 20 (which is also pretty cool, from a marketing viewpoint).

No, David, it was Apple that caused confusion. For decades versioning was:

Major New Release.Important Update.Minor Update with the Important Update and Minor update ending at “9” (if it was needed to go that far). Apple followed this even when they released Mac OS 10 UNTIL they realized they were closing in on Mac OS 10.9.9. Apparently panic set in or they were wedded to the number 10 so they released MacOS 10.10.0 and called it a Major New Release but only giving it an Important Update number. Oh, I used “Smilodon” for MacOS 10.9.x as I felt that was an appropriate “Big Cat” name.

Although I don’t like it, my feeling is Apple’s annual OS releases are here to stay. In that sense, for all I care they could have just called it macOS 14 to match up and synchronize with iOS.

More to that point, they could have just used the year as version number kind of like the unofficial Mac hardware distinction. 2020 MacBook Pro runs macOS 2020 and syncs with iOS 2020. It’s really not more or less sensible than the forced annual OS update cycle.

No. They switched numbering schemes some time during the 10.1 (“Puma”) release. According to the Wikipedia table:

My suggestion is to just extend this same system into the public version number. But ultimately, very few people are going to care one way or another.

Still finding kinks in Catalina…not eager to jump to an OS that I’m sure is mostly focused on pivoting to ARM. At least now I know why Apple has been aggressively deprecating kernel extensions, 32 bit, and so of late.

Catalina has been a troubled release, and even as we head into another macOS development year, we hear from people who continue to worry about upgrading to Catalina.

Holding off on Catalina has pretty much been the recommendation from TidBITS (or at least from Adam) since the major Mail loss problems began being reported. Judging from comments here, I’m not the only one staying back, with it now looking like there will be no fixes coming at all or even being acknowledged for the entire Catalina release cycle!

I’m also concerned that going directly to Big Sur (if Mail is fixed) will now require going back to find old articles on “how to use the new features of …” for two major OS upgrades. And hoping that a direct move from Mojave to Big Sur will be possible without a risky stop at Catalina.

“So much for Avalon, the city on Catalina Island that was our vote for a Catalina-related name”
A little reminder: Apple has never done releases named after cities, far as I can recall.

A fair point—Apple has always gone for natural areas or formations. I’ll be curious if we ever get a clean-up release like Snow Leopard, Mountain Lion, El Capitan, or High Sierra again.

But if Apple ever does release a cleanup following Big Sur, maybe they’ll call it Esalen.

At some point I’ll have to tell you what it was like camping on Catalina, with the wild pigs.

Wait, Catalina doesn’t support 32-bit apps AND has wild pigs? That explains so much.

It also has buffalo.

But for those cute little foxes you need to go to close by Santa Cruz Island. Just never lose sight of your picnic.