I thought I read that you could drive one by TB and a second via an HDMI adapter.

Another reason to sit back and wait and see.

Only if you need to drive two external monitors from a MacBook Air or MacBook Pro, or three from a Mac mini. I’ve never done that in all my years of using Macs, nor have I seen anyone doing it in the wild, so while it’s not an unreasonable thing to want, it’s not exactly a mainstream need.

I’ve never done it on any of my Macs, but that is my setup on the Windows laptop I use for work. It has two external monitors (one in portrait orientation) in addition to its own display.

I will admit that I’ve never seen anyone else with this setup, so it’s far from commonplace.

I’ve never had three screen running simultaneously on the same Mac. Ever. And with screens getting bigger and nevertheless more affordable I don’t see that need coming up anytime soon.

So definitely wouldn’t be a problem for me. Not for my wife either which is why she’ll be pickung up a fully decked out M1 Air as soon as Apple’s holiday 6% cash back deal comes around.

Nevertheless, if you really need more screens on M1 than what Apple specified, it works using DisplayLink adapters. Up to 5 external on the MBs, up to 6 on the mini. 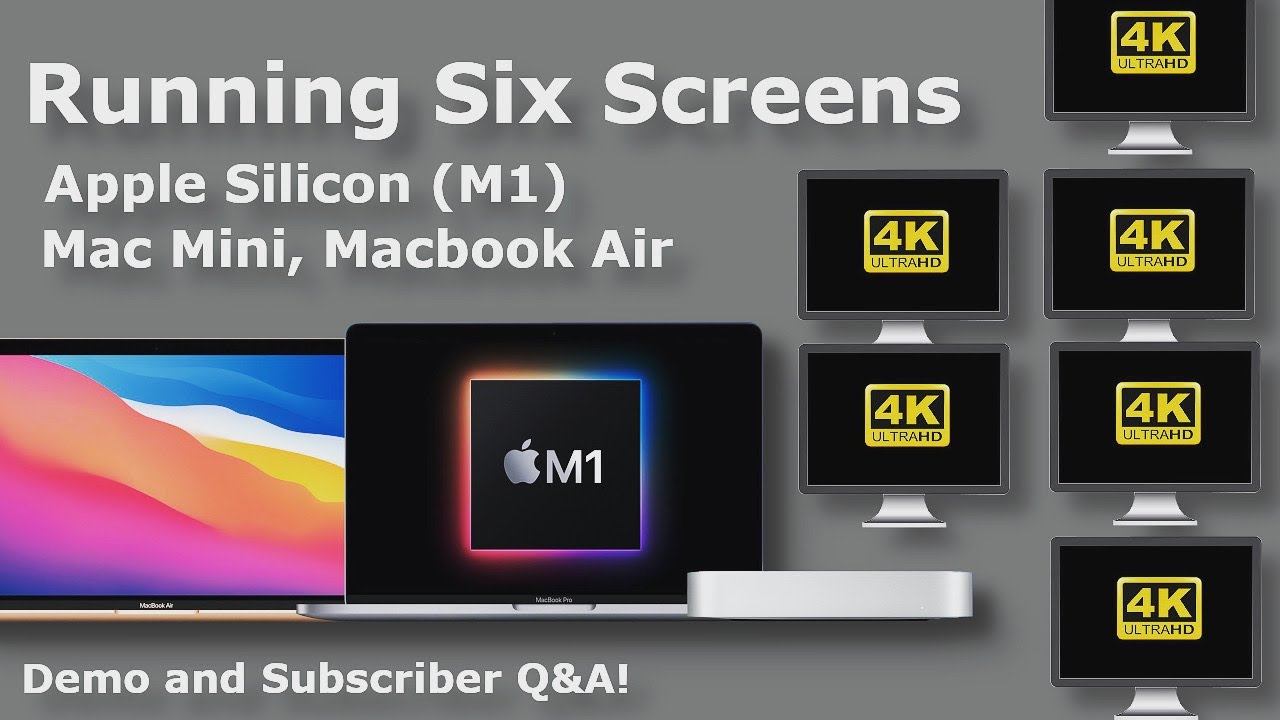 Only if you need to drive two external monitors from a MacBook Air or MacBook Pro, or three from a Mac mini.

Coincidentally, I ran across this article today:

This demonstration (including linked YouTube videos) uses DisplayLink (USB 3.0) video adapters in order to drive the extra four displays. These are, as far as I know, CPU-driven, not GPU-driven, which is why they can get around the M1’s two-display limit. But it seems that despite this, performance is very good (but not perfect) and the CPU load seems to be quite acceptable.

So those people who require more than two screens on an M1 Mac have a solution available to them.

Nevertheless, if you really need more screens on M1 than what Apple specified, it works using DisplayLink adapters. Up to 5 external on the MBs, up to 6 on the mini. 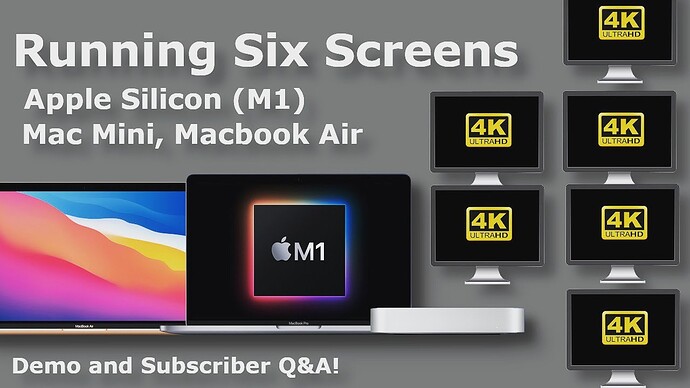 And in case anybody’s wondering, the best performance reported in this test was achieved with the StarTech dual DP 4k 60 Hz DisplayLink adapter. $100 shipped. There’s a less expensive variant if you need only a single DP port.

Last year Apple had a holiday deal where if you bought kit with Apple Card they would give 6% instead of the usual 3% cash back. My wife’s hoping that deal might resurface.

I just got an Apple Pay promotion email. There is no mention of any increased cash back on the Apple Credit Card, The only promotion appears to be rebates in the form of Apple Gift Cards on selected models between November 27 and November 30. See this iMore article for details.

I saw those. $50 on a MBA, and all M1 Macs are excluded. This is all about moving old merchandise.

Only if you need to drive two external monitors from a MacBook Air or MacBook Pro, or three from a Mac mini. I’ve never done that in all my years of using Macs, nor have I seen anyone doing it in the wild, so while it’s not an unreasonable thing to want, it’s not exactly a mainstream need.

I use three screens on my 2018 mini for Zoom meetings and classes. Two are Zoom gallery view and “main” view, the latter being reminiscent of a broadcast “On Air” monitor.

The third is used for viewing subject text and for preparing and sharing other materials. Early each year at tax preparation time, viewing multiple documents and form instructions without losing context comes close to stacks of paperboy omits the need for large horizontal surfaces.

The main lesson for me is that multiple screens are most useful for all kinds of interactions that have no need for high frame rate displays and the like.

Historical Note: My first use of triple displays on a Mac was three Apple Hi-Res Color displays on a Mac Iici. It was extremely for multi-protocol network diagnostics and configuration using X-terminal access to remote systems.

Excuse the shouting - I fat fingered something and it just happened.

FYI, I fixed your “shouting.” The problem was that you used ---- on a line by itself, which is Markdown for “make the previous line a heading.”

And remember, everyone, you can edit everything you post here. Just click the pencil icon under your post. That’s far preferable than posting again to clarify.

Thanks. I don’t think in Markdown so I was editing the font, not the layout.

As always, I appreciate good editor.

I will admit that it threw me for a few seconds as well, since I was expect that you’d somehow put a # sign in, which Markdown uses for headings as well. But once I saw the characters around where the bold formatting started in the preview, it made sense.

TidBITS Talk: The best formatted discussion group on the Internet!

FYI, I fixed your “shouting.” The problem was that you used ---- on a line by itself, which is Markdown for “make the previous line a heading.”

Thanks for the hint. I usually put spaces between dashes when I want to create a separation:

Which, in Discourse, appears to create a horizontal line across the entire message (see above).

Putting a lot of spaces between the dashes does the same thing:

If I prefix the dashes with a backslash, then I get actual dashes:

The joys of using a system that tries to combine pieces of several partly-incompatible formatting systems (Markdown, BB-Code and HTML).

Thanks for the follow-up. Sometimes I wonder if I should get an Apple Card, but between the infrequent Apple spend, the opportunity cost, and the bother of having another card, I haven’t.

Well, it’ll require less memory since things like GPU processing are done using unified memory - unlike the old high performance model where GPU requests were packaged up, compressed, and sent out over PCIe to a graphics coprocessor.

But memory is memory, and it’s still macOS. A lot of the performance you see even when the system is under stress can be credited to fast swap and/or demand paging.

This means that under stress M1 systems are using fast access to the SSD, and that means writes. And nothing can age your SSD more than a high quantity of writes for paging or swap. If I were buying an M1 system, I’d go for 16 GB and at least a moderate large SSD (which would tend to supply more spare frames).

They have the same limitations as the machines they replace - 16 GB RAM and two Thunderbolt ports.

These are the machines you give to a student or teacher or a lawyer or an accountant or a work-at-home information worker - folks who need a decently performing machine who don’t want to lug around a huge powerhouse machine (or pay for one for that matter). They’re still marketed at the same market segment, though they now have a vastly expanded compute power envelope.

The real powerhouses will probably come next year with the M1x (or whatever). Apple has yet to decide on an external memory interconnect and multichannel PCIe scheme, if they decide to move in that direction.

Other CPU and GPU vendors and OEM computer makers take notice - your businesses are now on limited life support. These new Apple Silicon models can compete up through the mid-high tier of computer purchases, and if as I expect Apple sells a ton of these many will be to your bread and butter customers.

In fact, I suspect that Apple - once they recover their R&D costs - will be pushing the prices of these machines lower while still maintaining their margins - while competing computer makers will still have to pay Intel, AMD, Qualcomm, and nVidea for their expensive processors, whereas Apple’s cost per SoC goes down the more they manufacture. Competing computer makers may soon be squeezed by Apple Silicon price/performance on one side and high component prices on the other. Expect them to be demanding lower processor prices from the above manufacturers so they can more readily compete, and processor manufacturers may have to comply because if OEM computer manufacturers go under or stop making competing models, the processor makers will see a diminishing customer base.

I believe the biggest costs for a chip fab are startup costs - no matter what processor vendors would like you to believe. Design and fab startup are expensive - but once you start getting decent yields, the additional costs are silicon wafers and QA. The more of these units Apple can move, the lower the per unit cost and the better the profits.

So … who should buy these M1 Macs?

If you’re in the target demographic - the student, teacher, lawyer, accountant, or work-at-home information worker - this is the Mac for you.

If you’re a heavy computer user like a creative and don’t simply want a light and cheap computer with some additional video and sound editing capability for use on the go - I’d wait for the M1x (or whatever) next year. You’ll probably kick yourself next year when the machines targeted at you finally appear.