Apple TV users in Switzerland got so fed up with Apple’s remote control that Swiss telecom Salt made its own, with help from Apple. Alas, they’re not currently available outside the country.

I really like the Siri Remote. Perhaps its main problem is that it looks and behaves differently from all the others. It’s small, sure, but I can hold it comfortably in one hand and do the swiping and tapping with my thumb. I’ve found the Siri controls handy, such as ‘Pause’ and ‘Restart’, and it’s great to see a remote with an absolute minimum of buttons in contrast to the usual complex array of which I normally use just three or four. Takes just a few minutes to get used to the required swiping and clicking. I like it!

The Salt remote has a mute button! That alone is worth $20. I wonder if it works with all apps - especially Netflix previews?

It’s not just its uncommon appearance. One of its most unexcusable design flaws is its perfectly symmetic shape.

Most old-fashioned remotes have a tapered shape or some other “non-symmetry,” so you can instantly tell whether you’re holding it correctly, or “upside-down” just from how it feels in your hand.

The current Apple TV remote, in contrast, has a perfectly rectangular outline and extremely subtle differences in the buttons’ shapes, such as the all-but-unnoticeable indent in the Siri button (with the Microphone icon). Unless your thumbs’ fingertips are so sensitive that you can reliably make out the somewhat rougher surface of the trackpad, there’s insufficient haptic feedback about how you’re holding the remote.

As a result, you might be pulled out of a movie if you just wanted to reduce the volume but hit the Menu button instead; or instead of pausing a show, you find yourself in the TV app, because you pressed the “TV Screen” button by mistake.

One of its most unexcusable design flaws is its perfectly symmetic shape.

I always hear people complain about this, but it’s never been a problem for me: I just leave it facing the right away on my coffee table and never rotate it. When I pick it up it’s the right way and I set it back down the same way.

A bigger issue is me trying to use the Siri button and forgetting I have to hold it down while speaking, like an old walkie-talkie. I tap it like bringing up Siri on iPhone or watch and expect it to listen and it doesn’t. Very annoying.

I also think there are issues with the AppleTV interface that are far more pressing than the remote. You can buy a $10 universal remote that will duplicate most of Apple’s remote’s features (sans touchpad) if that’s all you need, but a new remote doesn’t fix the software.

I added a leash (https://www.apple.com/shop/product/MR662AM/A/remote-loop?fnode=aa). Now, it’s no problem figuring out which end is which. The cheaper trip would be put gaffer’s tape over the back of the remote. The rougher texture would let you determine the orientation. I did this when I was using multiple DVR’s that all used identical remotes.

I am a fan of this case which includes a leash:

It is a simple matter to know the correct orientation even in the dark due to how the case fits over the remote. It will also protect the remote in the event of a drop.

I can tell which end is which just by looking - shiny at one end, matte at the touchpad end. And the menu button is clearly different from the others. I never watch in total darkness though, always with a low light. That’s a whole new topic I don’t propose to get into!

I was doing OK with the Siri remote, but I then accidentally discovered that my Logitech Harmony remote works with the Apple TV. I now use the Harmony remote almost exclusively. The one feature missing is being able to scrub when watching a show.

Steve Jobs is probably turning over in his grave at the loss of minimalistic simplicity.

I actually like that the Siri remote is “Apple-different”, but do, occasionally get it turned wrong-side-forward and it’s very sensitive.

I see they kept the “Menu” button… has this ever been used to load a menu of any kind, or is it always a back button? Seems like that could have altered too with a back arrow / menu nomenclature. If it is used as a menu somewhere, can someone let me know where?

Customised with a stick on button 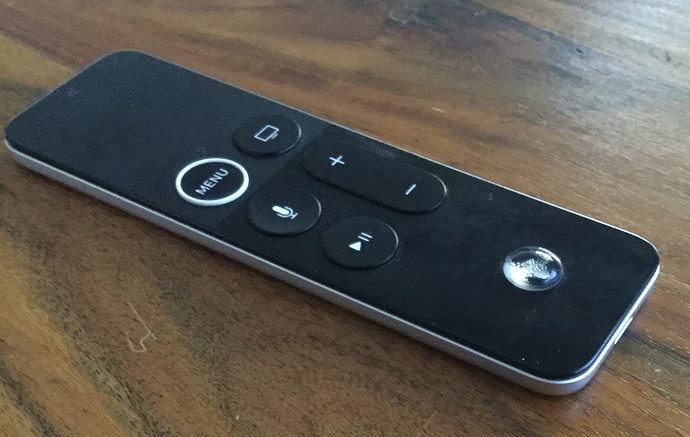 Spot on! When it comes to Apple’s remotes and mice, form follows function is ignored. The Apple TV remote is a quintessential example of the ability of the human mind to adapt to chaos. I’ve gone back to the previous aluminum version of the remote, and it was no great shakes.

The current Apple TV remote, in contrast, has a perfectly rectangular outline and extremely subtle differences in the buttons’ shapes, such as the all-but-unnoticeable indent in the Siri button (with the Microphone icon). Unless your thumbs’ fingertips are so sensitive that you can reliably make out the somewhat rougher surface of the trackpad, there’s insufficient haptic feedback about how you’re holding the remote.

Ding ding ding! Nailed it. We use ours mostly in bed at night in the dark where it’s often getting put down on the covers and slightly “lost” between uses. It’s a disaster every time we pick it up. I will have to look into one of those leashes.

The other big issue for us is constantly touching the touchpad by mistake, usually when we’re just trying to find the device or even just picking it up! Damnit, all we wanted to do was pause or change the volume and now our show is gone and we’re looking at the home screen or skipped to somewhere else entirely in the program!!

This flaw could easily be remedied if they optionally required clicking the touch pad before responding to touch. It does have an accelerometer, does it not?