Anybody know what the deal is with USB-C to Lightning adapters?

So a few months ago I bought a simple little USB-C to Lightning adapter. It came with a short lanyard that could fasten to the USB-C cable I have attached to my MBP charger. Now anywhere I brought my MBP setup with me, I always also could charge my iPhone using the same charger. It was nice for those situations where I wanted to top off my iPhone but didn’t have a Lightning cable with me.

Anyway, the other day I wanted to buy another such adapter for a second charger setup I sometimes use at my vacation place. But surprisingly, the Amazon page for the adapter I had purchased a few months ago ended up giving me a 404. A quick Amazon search revealed that there was not a single such adapter left (except for one with no reviews whatsoever and only 4 units left). Now my adapter had always worked well and never gave me any reason to be suspicious. I also remember that back when I purchased it, there were many such adapters on Amazon and the reason I went with the one I did was because it was one of those with the best reviews.

Any idea why Amazon seems to have purged their store of these adapters? Obviously, they’re not MFi, but then again, Amazon sells tons of other iPhone stuff that’s not MFi so I must be missing something else here. It’s no biggie, but I’m curious what the issue might be.

There are many such items on Amazon where a factory somewhere makes 10K of something and sees how well it sells. It the sale rate is too slow they don’t make another batch.

Has happened to be me many times over the years.

FWIW, I think you can get this adapter as a part of a pack of assorted cable adapters: USB Type C Adapter Kit Compatible with Micro-USB/Type-C/USB Charging Cable, Not Compatible with Headphones (Black).

I have no idea if these adapters are any good, but the pack seems to include the one you are describing.

Thanks, saw that one too. No interest in any of those other adapters so I’ll see if any other offers come up.

There are several options available on eBay.

The USB-C to Lightning Cable connects any iPhone, iPad or iPod with Lightning connector to a Mac with USB-C or Thunderbolt 3 (USB-C) ports. Buy now at apple.com/au.

I’m not sure if this is what you are looking for, but Monoprice.com has an adapter. I find their products to be quite reliable, and fairly inexpensive. See Monoprice Lightning to Micro USB Adapter - Monoprice.com

Thanks, but the cable isn’t the issue. I have many of those. My problem is that I sometimes don’t have the Lightning cable with me. That’s why I like having a little dongle attached to my MBP charger’s USB cable. With that, wherever I am I can always use it to charge my MBP but also top off my iPhone if necessary.

Thanks, that’s Micro USB. Not quite the right one. It’s got to be USB-C so that it works along with the MBP charger cable.

I have found two on Amazon now, but in both cases reviews are a bit lackluster. My original adapter works like a charm and it’s built solid, so I’m put off by reports about no power, flimsy, or adapter breaking off (WTF?). Plus, neither appears to come with a lanyard. Bound to get lost without it. 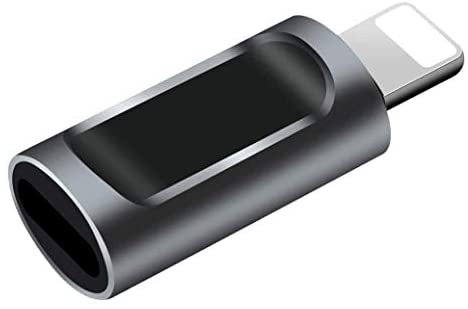