Any positive or negative experiences with Dropbox for Apple Silicon?

Dropbox for Apple Silicon has been out of beta for a bit more than a month. I wonder if any of you will share their experience. I have Dropbox only on the web just now and wonder if it is time to get the sync client on my macs.

I switched to Maestral when I got my M1 Pro MBP. It’s not at all without its quirks, but it does the trick for me with much less hassle than the Dropbox client. I don’t feel a big urge to go back.

Thanks for letting me know about this intriguing alternative DropBox client. Could be just what I need to solve a thorny problem!

The reason I like to use Dropbox is that Dropbox doesn’t send the whole updated file over the wire. Maestral does. Dropbox use a rsync-like protocol, which sends exactly the bytes to reconstruct the change. Not much response here. No news is normally good news, so I guess most people that use it are happy.

The reason I like to use Dropbox is that Dropbox doesn’t send the whole updated file over the wire. Maestral does.

I don’t have an M1 Mac yet, so perhaps this has changed, but that’s pretty much the cost I pay to avoid constantly getting messages from Dropbox asking me to allow it accessibility access on my computer every time the app updates itself.

I don’t recall ever having had such a message. I suppose I must have allowed it once, when I started using Dropbox many, many moons ago, but never since; and my Dropbox updates itself automatically.

How do you have Dropbox set up, that it needs to ask?

See Why Does Dropbox Want to Turn on Accessibility? | Dropbox Help

Despite what that says, I see this every time my computer restarts (or the app updates itself): 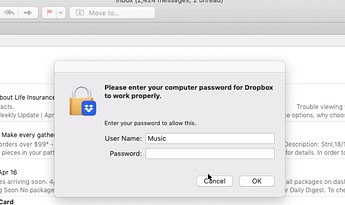 There is no checkbox to “not see this again”. I don’t need any of those features that accessibility adds.

One other advantage to Maestral is that it doesn’t count toward your device limit if you are a free Dropbox customer. I’m not at the moment, but I may be later this year. With an iPhone, iPad, and several Macs, the 3 device limit isn’t workable. On the machine I’ve attached the screenshot from, Maestral won’t start right when the computer restarts, so I run the official client there.

Weird. I’m pretty sure I’ve never seen that dialog. Why do you think it’s related to accessibility?

Because I have this unchecked. 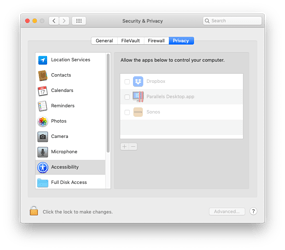 By the way, I first learned about this from this article.

I’ve run DB without accessibility permission since then, and my files have always synced fine.

It’s an interesting article, but it is nearly 6 years old and its premise, that there is no reason for Dropbox to want accessibility privileges, might have been right then but isn’t right any more. I suppose whether or not you allow Dropbox that privilege depends on your level of paranoia. Maestral is perhaps useful, but its inability to do partial file backups is potentially significant.

I have been using Dropbox on an M1 iMac since the product was available. I have had no issues whatsoever nor have I seen the “accessibility hack” mentioned in some of the comments. Furthermore, while I have tried other products and mechanisms to keep my files in sync across devices and platforms (including iCloud Drive) none have worked as transparently and fluidly as Dropbox. My company works in a mixed platform environment and Dropbox has been the best solution for us.

I would love to know what DropBox is (or was) doing with the accessibility services.

I would love to know what DropBox is (or was) doing with the accessibility services.

I had linked Dropbox’s explanation in an earlier post.

See Why Does Dropbox Want to Turn on Accessibility? | Dropbox Help

Fwiw, OneDrive doesn’t request accessibility. Not sure about Box or Google Drive.

Thanks. I missed that. The first two items (the badge and seeing who’s viewed your files) makes sense to me. There probably is no other way for a third-party app to change the way Finder renders a third-party application’s icon (in other words, a UI hack).

I’m not sure why they need it to handle file sync prioritization, unless they’re using events from the Finder and file open/save dialogs to know when files were accessed. If they need to know how often a file was written, I would think that it would be best to use the FSEvents API . This is the API Time Machine uses to track file-save activity in order to know what needs to be backed up at each iteration.