I tried to take a photo with my iPhone 7 but the image was wobbling, maybe “vibrating” is a better description. Top advice was to clean it but that didn’t help, looking more closely I got a bad feeling and using the Magnifier app on my wife’s phone let me clearly see that the lens is cracked (maybe it’s technically glass covering the lens but the end result is the same). 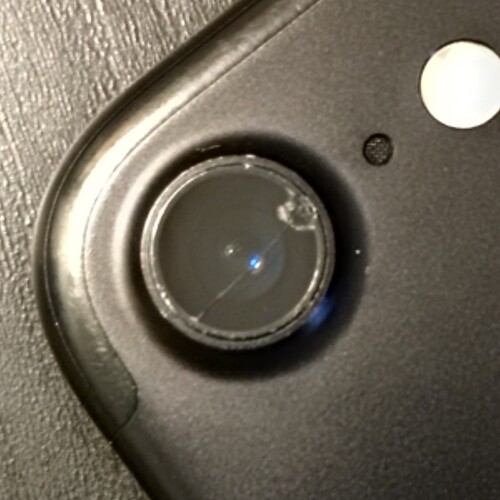 Is there any potential downside to getting the camera repaired (I assume it actually involves replacing the entire camera component)?

I’ve found a well reviewed local iPhone repair place that I don’t have a quote from yet but I think it will be less than $50, which sounds like a good deal. As long as the phone is opened up, I’d probably get the battery replaced as well.

I don’t take a lot of photos but I care enough to consider a working camera essential. I’ve had this phone over four years so I’ve gotten enough use out of it but I also don’t have a burning need for a new one. For both my iPhone 7 and my wife’s 6s, I’ve been thinking we’d replace the batteries soon and not replace them until something major broke or they stopped running a current OS. The iPhone 7’s processor is also in a 2019 iPad model so I think there’s no danger of it not running next year’s iOS version (or beyond).

Several comments. I haven’t actually done this, but I watch YouTube videos from various people who do repair work

. No answers for you, but some information that may help you ask good questions of the shop before you have them do the work.

Looking more closely at iFixit’s replacement part, it seems like the cracked glass may be part of the rear case assembly, not the camera. If that’s the case, it’s a much more difficult procedure

Thank you! I think you’re right about the cracked glass being a part of the rear case, not the camera. I’m still inclined to get a quote but with lowered expectations for what the cost will be; I expect a good tech in a shop may work a lot faster than what DIY instructions estimate but 2-3 hours vs. 10-20 minutes for a camera replacement (according to iFixIt’s guides) surely means a higher labor cost.

Regardless of the problem, I won’t work on iPhone hardware myself. Old Mac minis, ones with optical drives, were about my cutoff for hardware I’m willing to poke around inside. I don’t want to mess with adhesives, spudgers, suction cups, or anything with such tight tolerances.

$200 total for resolving the camera problem and a battery replacement, halfway to the cost of an SE, is my rough threshold.

I emailed the local store last weekend, describing the problem and asked about a battery replacement. He said the crack isn’t responsible for the wobble, it’s the camera component itself. Individually, he quoted the replacements as $40 for the back lens (it’s just the lens, it doesn’t require replacing the whole back), $60 for the camera, and $49 for the battery. But doing them all together, they’d replace it all for $109 (before tax). Hard to say if that’s a normal reduction or due to The 'Demic.

I went yesterday and the work took about an hour (I didn’t hang out there so I don’t know how many interruptions he had). The camera looks good, the battery reports 100% capacity again and peak performance capability, and the iPhone feels the same in my hand as it did before it was opened up.