So Belkin just released a car vent mount for MagSafe, but it’s plastic, doesn’t charge, and it’s a whopping $40.

Does anybody have any really good recommendations? In another thread somebody mentioned this mount, but the Amazon reviews for it are quite bad.
https://www.amazon.com/gp/product/B08P5HY35K

And this one doesn’t even have a single review yet.
https://www.amazon.com/dp/product/B08NYF253Q

Do you need it all in one device?

I’ve been extremely happy using this vent mount for the past 5 years:

You can probably clip it to your phone in a place that doesn’t interfere with a MagSafe charger.

Thanks, @Shamino, but I already have one of those. I just find it a bit of a hassle to wedge the phone in there and then also connect a cable. I was expecting MagSafe would do away with all that and turn the whole process into a simple click.

From what I’ve been able to find, I’d say the market just isn’t quite there yet, but I’m sure savvy TidBITS readers have found more offers than I’ve seen so far. Hoping somebody might have already discovered something nice. 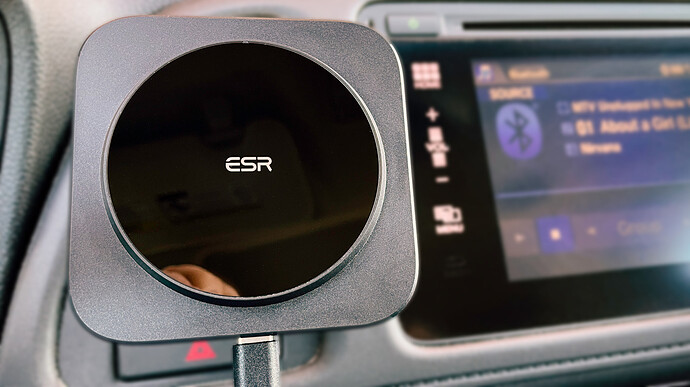 Review: ESR HaloLock is everything a MagSafe car charger should be |...

ESR's unofficial MagSafe car charger for iPhone 12 is an incredibly convenient accessory that, in the simplest way possible, takes the friction out of phones and cars.

This one here is getting really good reviews. It’s very moderately priced, especially factoring in that it comes with cable and PD+QC 3.0 charger.

It’s on sale right now for $25. Reviews sound very good. Folks say it apparently even holds their Max in place. Not sure I quite believe that, but it bodes well for my mini. I like that even at that price it comes with a dual-port 15W charger and appropriate USB A-C cable. I ordered it. I’ll report back when I’ve tested it.

On a side note, any reason why it seems next to impossible to get a 1ft A-C cable in gray/black? Apparently people want 2 or 3 or even 5 at a time. I’d like to get just one. But next to nothing on Amazon or Newegg. WTH?

Don’t know the reason for the scarcity, but Monoprice has become my go-to able source. They have a 1.5ft in stock. Monoprice Palette Series USB 2.0 Type-C to Type-A Charge & Sync Nylon-Braid Cable, 6ft, Blue - Monoprice.com

If you have CarPlay and use it, having a “charging magsafe connector” in your car might not be that great. The Magsafe connector (unlike the Lighting connector) doesn’t allow data to pass through it. Unless you have one of the few cars out this year that can do wireless CarPlay, there’s no reason to have Magsafe charging if you use CarPlay.

I’ll report back when I’ve tested it.

So after first use:

But, and this really pisses me off, the seller seems to lack confidence in their product so they have resorted to buying favorable reviews. Along with the device I received a fake “$15 Amazon gift card” instructing me to submit a 5-star review, take a screenshot of that, and then submit the screenshot along with my email address to the seller to then be mailed a real Amazon gift card. They actually even instruct people not to tell Amazon about it. Obviously, I reported it directly. Amazon said they will take care of it, but the product is still being sold, the seller is still online, and none of the recent 5-star reviews have been taken down. In fact, my review alerting to this fraud was actually taken down by Amazon. Anyway, you can notice that starting on a specific date, all reviews have been 5-star. A bit shameful people will whore themselves out for just $15. Anyway, reviews for this product cannot be trusted and IMHO neither can such a seller. Mine went back. Buyer beware.