Thanks, Adam, for discussing Affinity. I have been using Photoshop and Bridge for my nearly full time work on an 90,000+ photo collection, which I have cataloged in Photo Mechanic Plus; I purchsed Affinity Photo when Adobe began “Creative Cloud” putting the app on-line and charging monthly! Thought the monthly fee was reasonable for those who regularly upgraded–which I did not. I also usually work off-line for security reasons, so to use an application which requires an active internet connection is impractical. I continue to use both Bridge and Photoshop applications which I purchased long ago–and am forced to use a computer on which I don’t update OS so that the older versions of PS & Bridge will continue to work.

I am fairly disgusted with Adobe both for requiring a monthly subscription and for requiring on-line use, as well as it’s intrusion in the use of Acrobat reader with all the new pop-up windows and advertising for upgrades–when one only wants to use Acrobat to read .pdf’s. I think they are more focused on driving profits than providing software!
My main problem with Affinity is that after opening file in Affinity, saving it’s native “.afphoto” format is the only choice & I have many photos saved over the years as .psd’s. If I open a .psd file in Affinity I can only save it in .afphoto, PS will not open a layered photo saved as .afphoto! This necessitates either changing everything to Affinity and never using PS again, or never opening a .psd in Affinity because I could not subsequently work on that file in PS ! (And then .dng format is another can of worms! ) – I only have Affinity on a computer that uses the current operating system and only to open .psd’s to look at something that Preview does not display. So that’s the mess that Adobe has created and has put me a long way away from a time years ago when I owned some Adobe stock and even attended their annual meetings! - Jon Davidson

My main problem with Affinity is that after opening file in Affinity, saving it’s native “.afphoto” format is the only choice

If using Save or Save As then .afphoto is your only choice. But you can Export to many formats. See screen capture below. I’ve never tried to open a Photoshop PSD in Affinity, edit it, and then save as PSD again so I don’t know how well it works. 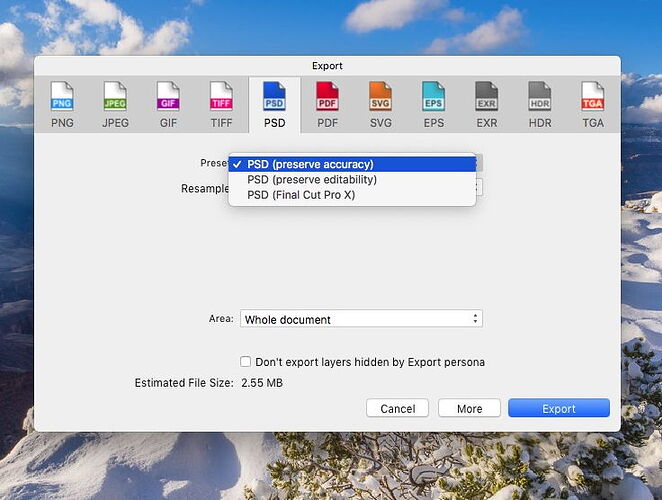 If using Save or Save As then .afphoto is your only choice. But you can Export to many formats.

This seems to be a common thing for image processing apps.

GIMP works the same way. You can only save in its native format, but you can export to quite a wide variety of formats.

I think the idea is trying to drive home the point that the native format can store all of the project’s data and metadata, while the various export formats all store some subset of it. (e.g. JPEG can only store a flattened image.)

For what little I do (take pictures from my camera or my scanner, make a few minor edits and export to JPEG or PNG), I don’t care. But if I was using all of the app’s features, I may want to be careful to retain a copy in the app’s native format in addition to my exports, just to make sure I don’t lose the ability to continue editing at some later time.

Thanks, David I will try that - Jon D.

…for security reasons … to use an application which requires an active internet connection is impractical…
I am fairly disgusted with Adobe both for requiring a monthly subscription and for requiring on-line use,

Whatever the rights and wrongs of subscription models (and they’ve been debated ad nauseam in multiple places), it’s not right to suggest that Lightroom Classic or Photoshop requires an active connection to run. All they need is an occasional sign-in - once a month or so, I think. In between, they run just fine. I’ve used both when far, far away from any connectivity at all.

it’s not right to suggest that Lightroom Classic or Photoshop requires an active connection to run.

I still use perpetual license Lightroom 6 – but also use Affinity Photo. A few days ago I had a brief (~7 minutes) network outage. Lightroom would not launch and was “Not responding” according to Activity Monitor. As soon as the network was back up Lr launched quickly.

I think that’s uncharacteristic, particularly for a perpetual licence, and it’s not what Jon was talking about.

My experience of working very much offline (not even a phone signal) has been with LR 2022, so v12 (and before that in 2019, with whatever version was current then). The only angst, which bit a couple of people on the trips, comes if it hasn’t been used, and hence hasn’t phoned home, for more than a month or so beforehand. The problem bit others using C1, so it’s not confined to Adobe.

I think that’s uncharacteristic, particularly for a perpetual licence

FWIW, Adobe’s perpetual licenses still phone home and they still require you to log in to Creative Cloud to validate your license, even if you have no CC-based products.

My installation of Photoshop Elements 2021 works like this. Even though it is a one-time purchase, not a subscription, it won’t work unless I’m logged into my Adobe account. Which is really annoying because I use absolutely nothing from their service - I edit locally stored pictures using only the built-in application features. But if I log off, the app stops working.

And installing it also installed Creative Cloud. Which I also can’t uninstall without breaking PS Elements, even though I have installed noting from it and have no desire to install anything with it. (It is occasionally updates the Camera Raw component, and offers me the choice to install several packages I know nothing about: Premiere Rush, Bridge, Aero, Character Animator and UXP Developer Tools with my current license. Plus one-click-to-subscribe links for all of the other apps they sell.)

Personally, I’d like to ditch this app, but it’s the only photo editor I know that supports my scanner software’s plugin (SilverFast), allowing me to scan directly into an editor window without needing to create temporary files.