Add signature to PDF with Preview

I’ve struggled for a long time with how to add my signature to a PDF using Apple’s Preview app. (I’m talking about a graphical sig, i.e. looks like when I sign with a pen.)

Just to clarify… since my old cheese grater Mac Pro is stuck on High Sierra, I’m using Preview version 10.0 (944.5) from 2017. Not sure whether the situation I’ll describe is different with newer versions.

I don’t currently have any fancy PDF editors working. Well, I do have an old “Acrobat Reader”, and it does seem to have a “Send for Signature” feature, but I don’t know what they mean by “send”, haven’t experimented with it (should I?), and want to keep this process totally local – especially because I don’t trust Adobe at all (kind of ironic, since in the old old days, I was closely connected to them and was their top beta-tester for Photoshop, according to them – but they were a different kind of company then). Does anyone know what’s involved with using Acrobat Reader to add a sig? Does it involve sending my sig file (graphic) up to their cloud?

Actually, Preview itself can supposedly add a signature to a PDF, which is what I’d prefer. I’ve wrestled with that feature and can’t get it to work. The problem is that the program seems to require that you either hold a paper signature up to your Mac’s camera to photograph the sig, or trace it out with your finger on a trackpad. These won’t work for me: my old Mac Pro doesn’t have a built-in camera and neither do any of the multiple monitors I have attached to it; I don’t know how to hook up my old iPhone to act as the Mac’s camera; and my 2017 iMac, which has a built-in camera (which I’ve never used), is still out of action until I try once again to clean the dust out and get the damned thing to run reliably. Also I don’t have or want a trackpad.

What’s really infurating about Preview’s two supported methods – they’re really ludicrous in my case – is that I have a graphic-arts scanner hooked up which would be far better at scanning a paper sig into a graphic file than any stupid Mac camera; I have a big Wacom tablet with a nice artist’s stylus, which would be way better at drawing a sig than my finger on a dinky little trackpad; I already have a collection of my signature in various graphic formats (.png, .jpg, .gif, .psd), and I’m an experienced graphic artist and can convert my sig to any file format I choose.

I skimmed through the earlier TidBITS Talk discussion of this (December 2021) and I’m still confused. Also searched online and tried various methods described and none of them worked.

Can some kind soul describe a step-by-step method that would let me – with my old version of Preview – import one of my graphic sigs? When people use its approved method of holding up something to the camera, or tracing with their finger on a trackpad, doesn’t it store those pictures somewhere in some graphic format? Where? Is there some way I can convert (if necessary) one of my existing graphic sig files to the required format, stick it into wherever Preview expects to find it, and then insert it from there?

Sorry for the long long query. That’s what happens when you combine fast touch typing with a high level of frustration! Thank you.

I’m not aware of where those images are stored, but they do sync between copies of Preview via iCloud, if that helps in the search.

As far as I’m aware, there is no other way to get a signature into that version of Preview than the camera or trackpad approach.

That said, it’s just a graphic, so the workaround would be to make a PNG of your signature (with a transparent background) as a separate file and then copy and paste it into PDF as needed.

I do have an old “Acrobat Reader”, and it does seem to have a “Send for Signature” feature, but I don’t know what they mean by “send”, haven’t experimented with it (should I?)

I think “Send for Signature” is a cloud-based service where you tag signature fields and then send the document to some one else in order to collect their signature. That’s not what you want. 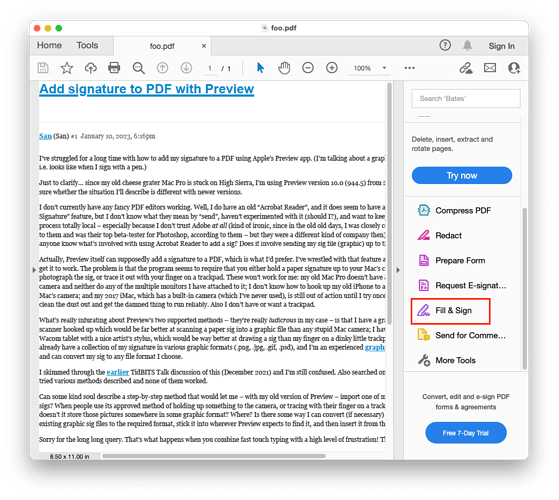 You can then use the Fill & Sign toolbar buttons to add text, checkboxes, lines and a signature (either typed or an image) to your document, wherever you want to put them.

I often use this to fill out “paper” forms that people send me as PDFs. It works fine when I make prints to mail to people. I wouldn’t trust it to be secure for e-mailing the file, however, because (I think) anybody could go and remove the filled-in content. But I suppose I could write-protect the document to prevent casual tampering.

I think the Send For Signature service (which I don’t think is free) includes some kind of encryption and authentication so the signature can’t be tampered with after the fact.

Of course, if you want a digital signature that is secure enough for legal documents, I’d recommend using a special-purpose service for this. I know real estate agents like to use DocuSign for this purpose.

That said, it’s just a graphic, so the workaround would be to make a PNG of your signature (with a transparent background) as a separate file and then copy and paste it into PDF as needed.

That’s one of the first things I tried. When the graphic is copied into the Mac’s clipboard, the “Paste” item in Preview is grayed out.

I’m not aware of where those images are stored, but they do sync between copies of Preview via iCloud

Although I have an iCloud account, I try to keep everything even vaguely security-related local (basically the same attitude as in the other thread about password managers). Of course my graphic sig isn’t a password, but it’s still a potential forgery asset, so I try to keep it as local as possible (although I occasionally send a “signed” PDF legal document to someone, so my feeling about it isn’t absolute).

Apparently not. It doesn’t even seem to have a sidebar anything like in your image, just a simple one on the left side of the window with “Thumbnails” or “Table of Contents”, etc.

I can choose Tools: Annotate: Signature: Manage Signatures… from Preview’s main menu, but then an alert just pops up saying “A trackpad or iSight camera is required to create a signature.”

Of course, if you want a digital signature that is secure enough for legal documents, I’d recommend using a special-purpose service for this.

I’m trying to keep this as simple/local as possible. Just yesterday I “signed” and dated a PDF legal document, using an extremely convoluted roundabout method involving re-“printing” the PDF via a couple of different graphic apps I have… and it was accepted. (The time-consuming complication of it was what prompted me to post my question here.) But it was only a light-duty legal situation, nothing very serious, so you may be right.

I have Autograph, which is a bit overkill but so easy for someone like me who is not used to graphic programs. Lets you do an autograph (a assume on your Wacom) and then create a png. Can be tried before you buy.

That’s one of the first things I tried. When the graphic is copied into the Mac’s clipboard, the “Paste” item in Preview is grayed out.

Oh foo, that’s right—the only graphics you can add are those from within Preview’s markup tools. Other PDF apps might allow pasting graphics.

I think you’re just out of luck if you don’t have either a webcam or a trackpad. Or a Catalina-or-later version of Preview that can bring the signature in from an iPhone or iPad.

I had to sign some Realtor forms a few years ago. I was still using Sierra on a MacPro at that time. Preview did not work.

I used the method described above by @Shamino and it worked just fine.