I’m hoping someone with technical knowledge can help me understand what’s going on with my Wi-Fi system.

I have two Airport Time Capsules, a 2TB model A1409, and a 500GB A1302. Currently the 2TB is directly connected to Gigabit Internet and the 500GB is acting as an extender at the opposite end of the house. I believe both have both 2.4GHz and 5GHz radios. My retina 4K late 2015 21" iMac connects to the Internet solely through Wi-Fi, as do all our other devices including an AppleTV and an HP printer. The iMac normally connects using the 5Ghz channel on the 2TB Airport Time Capsule. (The iMac is set to make Time Machine backups on the 2TB and on another wired hard disk. A MacBook Pro should be using the 500GB for TM backups, but that’s another story…)

I was reading Glenn F’s latest version of Take Control of Wi-Fi Networking with an eye to improving the way we use Wi-Fi at our home. Reminded there that opening the Wi-Fi menu while holding the Option key this is a source of enriched information, I found the following. 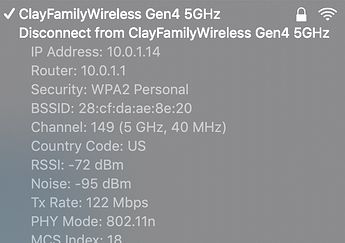 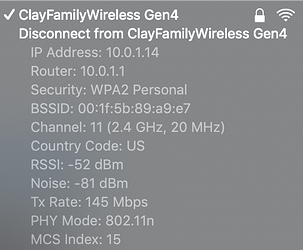 Can anyone tell me what’s going on here?