Visiting an Apple Store: The Value of In-Person Impressions

The first time I visited an Apple Store after they re-opened, I went with one specific purpose: to hold an iPhone mini in my hand, to decide if it felt better than the 12 Pro I was then using.

It did, and when the iPhone 13 generation came out, I ordered the 13 mini. (And I skipped buying a new iPhone this year, because no mini.)

Maybe doing just one store in Dublin makes it not worth the bother for them, as other Irish republic cities are too small for one at ~200K or less populations? Outside the US, Apple likes larger metro’s.

Or maybe it’s simply down to agreements with local suppliers there not to compete…?
Or perhaps more likely some international tax issues (given Apple’s European headquarters are there)…?

It’s quite a mystery, I’ve never seen anyone in-the-know about such things ever address.

In London, I popped to the new-ish Knightsbridge store. It’s very similar to the Regents St branch in feel and layout. But London definitely needed another branch, as they’re always crowded.

TBH, I think they could even add another, maybe in the new Battersea Power Station redevelopment (right near their new UK London headquarters). But from walking around there, the shopping space is quite niche and relatively high-end, that maybe they don’t see it as right. We’ll have to see later-on, as the economic cycle improves after 2-3 years!

I was quite astonished how perfectly well it all works –and more importantly for me– without any fan sound on the 16MBP.

I’m selling the LG 5K now, as even for me, having three large 27" screens was a bit of a joke on my desk space, lol!

I had a very different reaction to the Ultra.

When I first learnt about it, it didn’t move me enough to upgrade from my Series 4. One day, I went into our local Apple Store to checkout the AirPods Pro 2 and decided to take a look at the Ultra. After seeing the Ultra and trying it on, I was really excited about it. It fits me just fine even though I’m relatively small and have very thin wrists (5’8", 130lbs). I can fit a finger underneath the Ultra too but the whole thing looks fine to me.

I prefer the looks of the Ocean band but find the Alpine loop to be more comfortable. I have both bands and wear both. I love the Ultra and gave up my Series 4

I went into the Apple Store thinking I might upgrade to the AirPods Pro 2nd gen (I have a first gen) and ended up keeping my 1st gen and upgrading my watch. 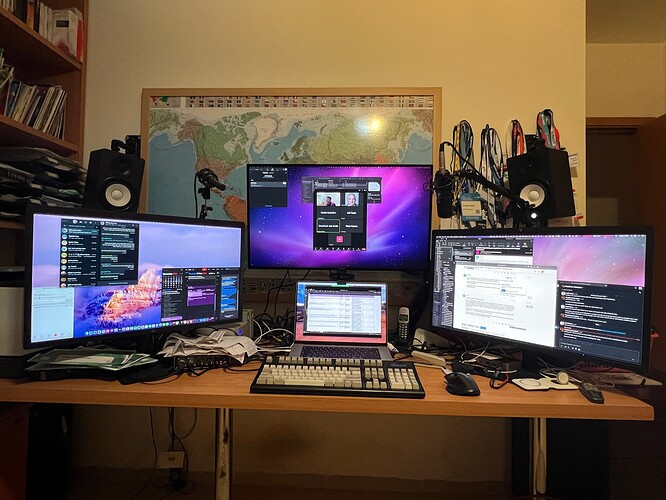 My guess is Ireland is too small a market of potential buyers for Apple’s range of hardware:

IPhones sell like gangbusters in Ireland, but that’s about all. It’s easy to stock and restock resellers:

Nice! My two Apple ones are Vesa mount versions (where two LG 5K’s originally were - the LG’s obviously came adaptable back onto its their own stands, unlike Apple’s as we know!).

I’d add a picture too, but it’s all being mucked around with currently on my desk.

My guess is Ireland is too small a market of potential buyers for Apple’s range of hardware:

IPhones sell like gangbusters in Ireland, but that’s about all. It’s easy to stock and restock resellers:

Could be. Though I also suspect tax issues have something to do with it; so maybe it’s ultimately down to several factors. Though which one of those factors is the defining one, I guess we’re likely to never know.

I think it’s quite obvious that while Apple markets the Ultra as being for the adventurer type, in reality, most people buying them are just liking the new design aesthetics, and are buying for more basic everyday fashion reasons.

Like me probably – as I’m certainly not climbing any mountains, diving with whales, or running any endurance marathons anytime soon, lol!

And yes the Trail Loop is IMO the best band Apple have ever done. Though they are being ripped-off by very high quality third-party ones at a tenth of their $100 price on AliExpress & Ebay – I bought four copies that were delivered before Apple even started delivering theirs, by 3-weeks! They were 95% as good as the Apple Trail Loop I got with the watch, and come in more colours than Apple offers. These Chinese factories can knock them out in super quick time at minimal expense.

I think economically, up until Brexit, Ireland has been treated as a subset of “the Uk and Ireland” by a lot of companies. Makes sense in terms of island status and demographics/language, more people live in a lot of cities than live in the whole country here.

Dublin would be the only city that made sense in terms of numbers. Historically, Apple did look at one building on Dame Street, Dublin City centre, right by Trinity College but ended up not taking it, it would have been good but… didn’t happen. It may be good politics not to squeeze out local suppliers while availing of the benefits of being here, but I can’t see that stopping them if there was benefits to them.

In other news, just picked up an iPad Mini, 256Gb. Like Adam in the article, I’ve been charmed by them for a while now. Finally succumbed… purple naturally.

It’s interesting how similar experiences and reactions can still lead down different paths to different conclusions.

Studio DIsplay and 24" iMacs: I agreed with almost everything you said (e.g. the Studio Display is virtually identical to the display on the old 27" iMacs). However, I couldn’t see getting a new 24" iMac to replace my old 27" one. I really like the extra size of the 27" display — and I didn’t want to downgrade to a smaller size. Plus, I have come to prefer having the display separate from the computer. That way, if the computer ever needs a major repair or replacement (as happened to me a couple of years ago), I can replace the CPU unit without having to discard a perfectly good display. So I happily went with the Mac Studio. The only downside is the relative cost…but I decided to bite the bullet there.

iPad: You start off by saying “I’m not much of an iPad user.” I guess that alone counts for our differing perspectives. I am very much an iPad user. I have given up on our MacBook entirely (it’s now just Naomi’s). I use the iPad in preference to my iPhone…whenever I am home…because I appreciate the larger display and added features. When I travel, I use the iPad instead of a MacBook…and the addition of a Magic Keyboard makes doing so a more than acceptable alternative.

I agree that one downside of the Magic Keyboard is that you cannot flip it out of the way. But I accept that in exchange for the way it provides hands-free support for the iPad with just a quick flip up…much easier to deal with than an other solution I have tried. I usually like to use it even when I am not using the keys on the keyboard (such as to browse news apps). And yes, I do remove the iPad from the keyboard when that works better. I’m okay that there is no case protection at that point…because I am mainly doing this at home where it’s relatively safe to do so.

I guess that’s why Apple offers several different options. One size does not fit all.

Re text size: dynamic type on iOS is so lovely!

Day-to-day I use the “text size” tool in Control Center. This lets me set text size on an app-by-app basis.