You tread on dangerous ground! Cookies and biscuits are very different beasts.

I just got this from a friend: US/Brit language

How funny, this is the second allusion to Anne McCaffrey in this thread. Red Hanrahan was a character in some of her books.

Does paint in the UK still get chipped or does yours get crisped?

And I have it on reliable authority (P. G. Wodehouse) that, at one point at least, in Britain, a biscuit could also be taken.

Which sentence puts me (in mind of) the sainted Flann’s “Myles na gGopaleen Catechism of Cliche” in the Irish Times as compended in *The Best of Myles,* e.g.

What would do him but to march me into the nearest public house and stand me a glass of malt?
Nothing.
Under what did I think I might as well have it?
The circumstances.

Correct. The cookie crumble and the biscuit is taken. And paint gets chipped. As do cats and dogs.

When I was in London on a high school trip (many years ago!), we asked an older gentleman in the Underground where we might find a bathroom. He looked at us, clearly uncomprehending. We repeated the question, and he looked uncomfortable and sputtered, “There’s a Turkish bath on George Street.”

The Best of Myles got me through College.

Correct. The cookie crumble and the biscuit is taken.

Tea is often taken with biscuits at around 3:00 in the UK, as emphasized by The Rolling Stones in “Live With Me” Correct. The cookie crumble and the biscuit is taken. And paint gets
chipped. As do cats and dogs.

It’s all six or two threes…

And gastropod, we’d say six of one and half a dozen of the other.

I think it’s a regional thing… in Scotland, “six or two threes” is more common. (Maybe thriftiness extends to words?

I guess Mick Jagger must be an early riser.

Another day, another movie… Today little bears are watching Paddington while enjoying marmalade and cherry jam elevenses. Paddington is famously known for his taste for marmalade. We’ll…

Elevenses and afternoon tea are far from incompatible!

Checked https://standardebooks.org/ and no Yeats there.

The Collected Works is available on Kindle.

Yeats’ work is in the public domain; check out Project Gutenberg:

And of course, Apple’s Books app.

My favorite among Yeats’ poems: 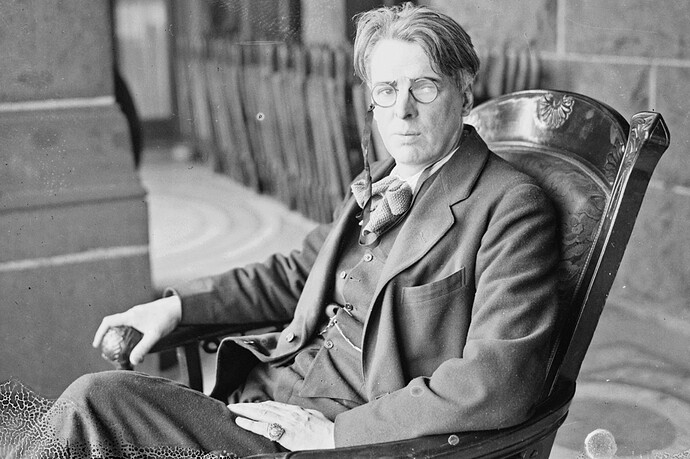 I have heard that hysterical women say

Well sorta kinda partly public domain, anyway–it’ll be a while yet before that catches up with a poet who died in 1939. The books on gutenberg.org are the earlier stuff: those “collected works” are dated 1908 and the youngest volume of poetry, Seven Poems and a Fragment, is dated 1922. So “Lapis Lazuli” ain’t there but my own favorite, “The Wild Swans at Coole” is.

If you’re interested, get Finneran’s 1996 edition of The Collected Poems (careful, that’s not the one available on Kindle–it’s dated 1933), which (finally) puts the last poems in their proper order: “Under Ben Bulben” first and “Politics” last. No cold eye for him.

It’s unlikely that any of Yeats’s early stories & essays will ever appear as standardebooks, although it’s a volunteer outfit and you never know. They’re pretty obscure. It’s an interesting project, though, and definitely worth a look.

Ha! I had to laugh when I read the Thai equivalent in that summary, completely true! Having not seen a 7-Eleven in a decade in the US, it was one of the most notable things when I first arrived. If you think there’s a lot of Dunkin Donuts, Tim Hortons, etc in your country; it’s nothing compared to 7-Elevens in Thailand.

Having grown up in the US to two parents that emigrated from Ireland, I still hesitate over the different spellings of certain words, but at least I could understand the slang phrases from both sides of “the pond”.

I’m surprised no one has touched on the UK rhyming slang yet, best way to really confuse Americans. [EDIT: never mind, finished reading the thread and there it was]