So do you buy we'll see refreshed TouchBar 13" MacBook Pro with an M2?

Recent rumors have indicated the Mar 8 event could introduce one new portable and two new desktop Macs. Model numbers indicate these might just be M2 models. Consensus about the desktops is that it is either two new Mac minis (perhaps a replacement of the low-end M1 model along with a new Apple Silicon-based high-end mini) or a new high-end mini along with the new 27" iMac (Pro?).

And so far the assumption for the portable was that this would be the new 13" MBA (or just MacBook?). But just today, a previously accurate source claimed the portable Mac would in fact be an M2-based refresh of the 13" MBP and that it would retain pretty much the entire form factor including the TouchBar and its (non-mini LED) screen with just the M2 chipset replacing the previous M1-based circuitry.

Do you buy it? And why? Is there a need for a “low-end” Pro if we assume the new entry-level portable Mac is the 13" Air?

I buy it 100%. I think they finally saw Better Touch Tool and Aqua Touch and heard from enough users that people wanted the power and quiet of an M1 series machine but also wanted the TouchBar retained. Apple listened and my guess is buyers can order it with or without the TouchBar. I hope I am correct.

No. I felt it was a bad idea at the time and the passing of time hasn’t changed my mind. I’m yet to meet a single person who used, or even wanted, a touch bar. I would actively avoid any machine which had one.

Apple killing it suggests it wasn’t well received or used - and I’d surmise they’d have data to back that up.

Since Apple dropped the TouchBar on the latest MacBook Pro models, I find it hard to imagine that they would ship it on another machine at this point. Part of the problem with the TouchBar was that it wasn’t widely available, so developers couldn’t count on it being there and it wasn’t worth a lot of investment from them. That problem would be much worse if it were only on a single shipping computer model.

I agree with that. I wonder how likely it is that they’d update it with an M2 but not go through the effort of updating the TouchBar (i.e. removing it). It’s not like they don’t already have a 13" MBP design without TouchBar already lying around.

But then again, I don’t really understand what purpose the 13" MBP (“Pro”) serves anyway these days. The 13" MBA has the entry-level crowd covered as well as those that put heavy emphasis on svelte and light. Those OTOH that want more oomph and are willing to sacrifice size and weight for it get the 14" or even a 16". What else is there?

At best this sounds like a placeholder. I’m very happy with my M1 MBP, but could easily have gotten the air. MBP has slightly higher screen brightness, slightly better battery life over the current M1 MBA, but they overlap a lot.

I’ll wait and see what the MBA redesign looks like in the Fall.

This rumor may be credible, because this is the same source that called the notch on the M1Pro MBPs.

Everyone I knew who had a MacBook Pro with a Touchbar hated it.

Not that you know me, other than through TidBITS, but I have an M1 MBP laptop with the Touchbar and I like it well enough. My main complaint is that the Touchbar is underutilized by the apps I use.

I’m not sure why they would keep a 13-inch MacBook Pro in the lineup alongside a 14-inch model.

We earlier had a thread when it appeared the TouchBar had died. I think my comments from that thread are still valid.

I would also add that if Apple does not add a TouchBar to its non-integrated keyboards, provide a way for 3rd party keyboards to provide support, or at least provide a TouchBar accessory that could be situated above ar attached to those keyboards, most Apple users will not have access to it. I don’t see why 3rd party developers would continue to support a feature that takes a significant effort to support but can’t be used by most of their users.

It is notable that Apple dropped the feature from the 14" and 16" MacBoodPro upgrades, and did not include it in the latest independent keyboard upgrade while providing support for a TouchID key in both those upgrades.

Personally, I really liked the Touch Bar (although did lack a lot of support). Losing it is really my only real regret in upgrading from my 13 inch 2018 MacBook Pro with Touch Bar to my 14 inch MacBook Pro.

A small but significant number of customers shared my liking for the Touch Bar, but apparently not enough to overwhelm the (illogical in my mind) hate for it that many users (and developers) expressed.

The new 13 inch Pro is seems to be the entry level 13 inch Pro, intended to replace the current Intel MacBook Pro.

Putting a Touch Bar on a wireless keyboard poses some technical challenges that Apple apparently hasn’t been willing to tackle.

All that being said, it makes little sense for Apple to include the Touch Bar on only one model, so I’m not sure that I believe the rumor.

I love the touch bar. It’s ingenious. It’s just badly implemented. But it’s a million times better than a bunch of non-descript F-keys, of which most people never remember any particular function (except maybe 1 or 2).

If Apple manages to make it easy to reprogram them and actually design your own buttons, that would be super-cool. I never understood why they made it such a nightmare to use the touch bar.

They didn’t have a clear vision of what was possible, their design was as close to braindead as you might imagine. Basically, dragging icons from your screen to the TouchBar.

If you want to see how great a TouchBar can be, get the free BetterTouch Tool, then load it with the Aqua Touch Toolset. I can pretty much guarantee that maybe 1 in 30 Apple engineers (maybe even less) has ever even heard of it, much less downloaded it and used it.

Basically, the keys displaced on the Touch Bar are specific to whatever app is currently active. It can be customized, but it isn’t as easy as it should be.

If Apple was smart, they would buy and patent Better Touch Tool and Aqua Touch, make some smart developers rich, and then give the interface the Apple ease of use it requires and had buttons for a whole lot more apps that haven’t been programmed yet.

We haven’t met, but I like the Touchbar. I don’t use it as much as I could and it certainly has flaws. The only things I ever used the physical F-keys for were volume (the Touchbar slide is better) and screen brightness (again, I like the Touchbar better). A few examples — the Touchbar gives me slider control over volume and brightness, in Mail it lets me send e-mails directly to a folder rather than drag-and-drop (I acknowledge that it needs work), it usually pops up my e-mail address and physical address and phone number at appropriate times, when Calendar refuses to scroll the TB lets me change months more quickly than cmd-shift-t.

Well it’s quite clear the TouchBar is on its way out. It was never ported to the external KBs sold with desktop Macs or as as CTO option. And with the 14"/16" MBPs having just gotten a cmplete redesign without even the slightest trace of TouchBar, there is zero chance it will stick around. Perhaps on a 13" MBP if Apple indeed plans on refreshing its internals without any design changes, but even that is doubtful. For all practical purposes, the TouchBar is dead.

Now that said, what use case is there for the 13" MBP at all? It covers a price point between the MBA and the 14" MBP. And it offers slightly better battery life than the existing 13" MBA. But those two features definitely don’t make it “pro”. Can a case be made that a redesigned MBA, perhaps coined the 13" ‘MacBook’ with larger battery capacity and better efficiency from its M2 so as to get similar battery life to the current 13" M1 MBP, and perhaps optionally equipped with a better screen could end up replacing the current 13" MBP? Higher-end versions of such a MacBook could come in around the $1599 price point in between the entry-level ~$1k and the Pro level ~$2k.

Yeah, except the Mac Pro in the past has usually not followed that logic for obvious reasons.

They brought back MagSafe many years after killing it and the new MagSafe is much improved too. So if Apple can come to their senses over MagSafe why not make a MacBook Pro with TouchBar.

I am going to try to snatch up a 2020 MBP, 16b GB RAM, 1 TB which uses the M-1 and has no fan. So tired of Kernel Task and Window Server sucking up CPU due to nonexistent overheating.

Had to turn off the GPU in Firefox because both the CPU and the GPU are in the same heat tunnel.

While I am not a fan of the TouchBar, I saw the utility in it, if configured correctly and integrated with various apps. The biggest problem for me was the constant need for one-press actions on the function-key row (ie. screen brightness, volume, media, key brightness). Omitting a physical ESC key on the original design demonstrated a complete lack of understanding in how many people use laptops or keyboards.

Even after the redesign, having to tap and wait for the touch space to wake up, then hit the desired function, and then occasionally have it fail to read the tap and require a second attempt was a deal breaker for me.

Imagine the same thing with the volume on your big TV’s remote control or a light switch on the wall. It seems like a minor issue until you are doing it multiple times a day, every day/week/month/year.

IMHO, the only way the TouchBar would have really worked is if it were above the f-key row. Then it would be something that extended and added functionality with out sacrificing existing, always-available features.

Now a real innovation might be the dual-screen laptops if implemented well. Perhaps not as easy to use on a plane or in a cramped space, but much greater productivity options. 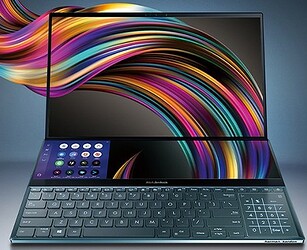 That isn’t the way the TouchBar works with Better Touch Tool and Aqua
Touch. It automatically recognizes the active app and switches the Touch
Bar buttons to the correct set.

Sadly, Apple’s rejection of anything not invented in Cupertino blinded Tim
Cook and Craig Federighi to the proper implementation of the Touch Bar.

Until you actually have the Touch Bar on your machine, download and install
the software, you are as blind to the possibilities as Cook and Federighi.

BTT and Aqua Touch did not have a huge ad agency and marketing budget
behind the introduction of their software.

Result: the premature death of the TouchBar. Sad!