Scanning (for Faces/People) in Photos.app

I copied several Photo Libraries from other devices to my iMac.

When I open these Libraries and select People, I get a message that none of the photos have been scanned and that they will be scanned “when you’re not using the app.”

What does “when you’re not using the app” mean?

Does the background scanning apply to:

I posed these questions on https://discussions.apple.com/ but no one seems to know the answers.

I’m hoping that the brain trust here can enlighten me.

Thank you for reading this.

What Photos will tell you is that it “will finish scanning faces when you quit Photos and your computer has power.”

It’s like some of the people I’m tracking always get their Faces scanned, and others are always pending.

So, Photos needs to be not running. Bit 1 of your answer?

I expect it will only scan the current system photo library. Also I expect that the faces that it remembers are stored in that library and won’t transfer to the other libraries - although you could be pleasantly surprised!

I use Powerphotos to manage several photo libraries and move photos and albums around, although it won’t do the face scans that you are after.
https://fatcatsoftware.com/powerphotos/

I think a TidBITS investigative report is order here. I’ve never had reliable results, and months to years of people scanning not completing, or not even starting, since the transition from iPhoto. And judging by the number of threads and articles about this issue in an internet search, it’s not a rare issue. I recently created a new library, copied items from another library (31k) and then waited. I set it as the system library. And then waited. I let Photos run, but didn’t use it, didn’t let my computer go to sleep, no background processes using much CPU. I tried with Photos not running. All sorts of things.

It’s been 4 weeks now and still the message “0 Photos scanned” appears. Has Apple simply abandoned this feature? It literally has not worked for me since iPhoto. With iPhoto, I had no such issues with scanning faces.

Hmm, I wish I had more to suggest, but apart from calling Apple support, you’ve tried the things that come to my mind.

I suppose you could try a second user account, just for giggles.

It’s been 4 weeks now and still the message “0 Photos scanned” appears. Has Apple simply abandoned this feature? It literally has not worked for me since iPhoto. With iPhoto, I had no such issues with scanning faces.

I have a library where I know I’ve added a pile of photos since October that includes subjects who are part of the “People” library in Photos. Those People collections seem frozen in place, and there are some like this: 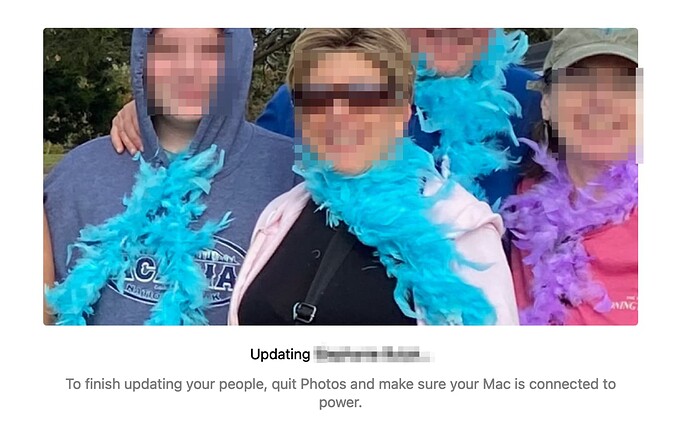 I’ve noticed that Photos on iPhone seems to have built an entirely separate People library, even though many of the photos are held in common, and that seems to be working as expected.

I’m about to take a deep breath and upgrade from Big Sur on my office production computer. This may be a version parity issue of some kind.

It is just another bug Apple refuses to fix. Quitting Photos and connecting to power is useless.

Apple also refuses to fix browsing photos using an Open/Save Finder dialog as it takes 20 seconds every time for any photo to appear. That’s theAppKit team who apparently couldn’t care less. But ultimately, it is Sr. VP of software Craig Federighi who is responsible.

It has become faster to use the Photos App to find a photo to share online, export it, and then select it as you would any other attachment, then go back and delete the exported file. You’ll still be waiting for App Kit to open you photos to browse, and have limited filters to find the photo you want.

Since Apple has now added an instruction in App Kit Photos to make sure Photos is running, I suspect Apple may be working on a better and faster interface for uploading your photos to social media from a Mac.

No problems on iOS.