Has anyone else seen this? 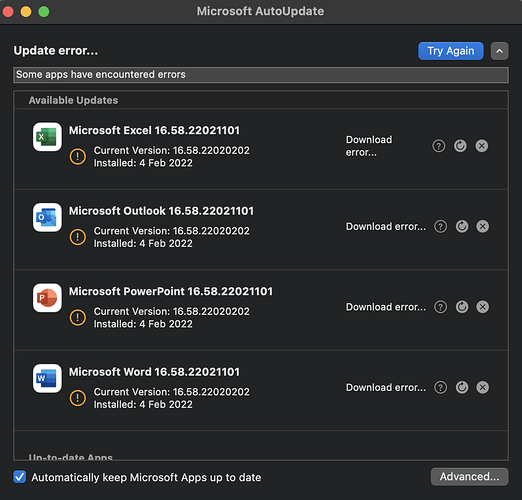 I am seeing this on my home M1 iMac and my work Intel MacBook Pro. I have never see before. I tried to re-install Microsoft AutoUpdate, but no luck.

It seems to be a known issue

FWIW, I don’t use the AutoUpdater.

I use MacUpdater which is a great buy-once app, not to be confused with the terrible MacUpdate Desktop app which is a subscription service.

Maybe their servers are overloaded? (especially if most computers are set for auto-update)

I guess this problem affects only Microsoft Office apps directly downloaded from Microsoft and not from the Mac App Store - Microsoft AutoUpdate is required for the former whereas the latter would be kept up to date by the App Store - see Q5 of the linked article. If the issue persists, perhaps a viable resolution is to download the App Store version.

I have been using the App Store version for a while, and am relieved that AutoUpdate no longer interrupt my work.

It looks like it has been pulled. I have no updates available now except for Edge