A couple things I will be looking for in the upcoming new versions will be a confidence level around:
• a gloriously, and quite magically Well-working and Durable keyboard
• a little more range in customizing the Touch Bar. I still don’t think Apple has added the completely logical component of a Eject touch when DVD drive is attached.
• I think Apple’s Backlight engineering has needed some correction for some years in MBPro.
It has been mostly gone under the radar, except in extreme faulty cases. I just looked at a dozen laptops I either use, or see in use at work. Seems each has some notable degree of backlight leakage that in the proverbial “perfect world” could call for an “oh, right, let’s fix that”
• I was pleased with Apple’s improvement in audio speakers, around the 2017 version I think it was.
Let’s maintain please
• I’d wish for a return to user serviceable upgradability, but we know that’s not going to happen …

Just starting a wishlist of expectations

User-upgradable RAM would be a godsend. Given the current chip shortages, RAM isn’t cheap right now, but the prices can be expected to come back down over the next few years. Allowing users to add RAM after the fact would make the investment in a new MBP last longer.

Similarly, a user-upgradable internal SSD would be nice, but it’s not as needed as the RAM. With USB-C, external SSDs can be effectively as fast as internal ones. But they do require carrying along an additional drive, a negative in a laptop.

I’ve heard rumors that the TouchBar is going away. I wasn’t sold on it at first, but the configurability of it provided by BetterTouchTool has made it quite useful. (BTT has become one of my essential utilities that I don’t want to be without.) The thing that would make it most more useful is giving the TouchBar itself haptic feedback—the current haptic feedback associated with the TouchBar uses the trackpad, which one is not necessarily going to be touching when using the TouchBar. (In fact, I’m more likely to use a TouchBar control when I’m typing than when I’m “mousing”.)

To be honest, the only reason I’m looking at possibly upgrading to a 2021 MBP is Silicon. Other than that, I’m quite satisfied with my 2019 MBP. But with Silicon being the foreseeable future of the Mac, I don’t expect my 2019 to have the same longevity I got out of my 2010 17-incher. I figure it’s at most about five years before Intel Macs are the red-headed stepchildren.

I probably would not miss the loss of the touch bar per se, but keep the Touch Id function on the power button! LOL I’m getting used to that convenience.

I have been browsing stuff regarding the mini-LED , but I have not quite figured out yet if this new engineering is designed to correct for back-light bleed issues

I’m pretty sure that the TouchBar is dead. It only ever appeared on higher-end MacBookPros. The fact that it didn’t appear on the new keyboards for the Apple Silicon iMacs is the clincher. Those keyboards have TouchID, but nothing else.

For the TouchBar to have earned its spot, it would have needed to be a feature throughout the Mac line. Without that, there is little incentive for developers to support it and be creative with it.

The Touch Bar was only bad because of Apple’s failure in writing good code to do something useful with it.

I’d like to see more people try the FREE Better Touch Tool and the Aqua Touch triggers. But since no one was making money on this, they had no reason to advertise and market it extensively.

I for one will not be happy if Tim Cook, in his ignorance and with the classic “not invented here” Apple mindset, kills the TouchBar.

I’m delighted to see Apple roll back the clock to the sturdier, more “pro”-friendly MBPro of the era which ended in about 2014. Providing user-friendly ports (including the “old” but immensely useful USBs and smart card ports). Between 2015 - 2021, Apple had become obsessed with “thinner” and “rounder” and “lighter.” Certainly laudable goals, but not while sacrificing usefulness and durability. I’m glad to see the “squarer” form factor which allows for more ports and more capable batteries. Delighted to see the return of mag-safe power supply, which, once again, divorces “power” flow from user “data” flow.
The improvements being made in 2021 are the sorts of things Apple should have focused on between 2014-2021: Upgrading silicon, speed, battery life and adding - not cutting - ports.
Although the “reveal” hasn’t happened at this writing, I’ll be disappointed if Apple persists in preventing users from adding their own SSDs and RAM; those items give users more flexibility at better-than-Apple prices (which, probably, is why Apple doesn’t allow them anymore). It would be SUCH a pleasure if the 2021 MBPs returned to the era of Apple’s “trap doors” allowing RAM and SSD access! But I’m not holding my breath for that.
But, overall, I’m genuinely pleased to see that Apple has returned to its senses with the MBP, restoring reliable keyboards and ports, in effect going back-to-the-future capturing the best characteristics of the pre-2015 MBPs and building on those great features. (My MBP late-2013 is the most reliable Mac workhorse I’ve ever owned. It’ll be nice to replace it with its new, younger, more internally modern sibling.)

People, where have you been spending the past months? If anything, Apple Silicon has integrated RAM more than any other chipset that has ever been used in a Mac. Have you seen photos of the M1? RAM is integrated with the cores. If you’re expecting SO-DIMM slots to come back to MBPs, IMHO you’ll be waiting at least until the successor of the Apple Silicon architecture. In fact, I’d put $20 on never seeing user-exchangeable RAM on a portable Mac again. 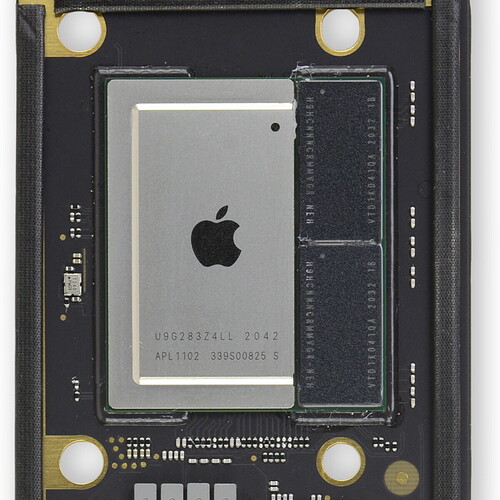 As noted in the other reply…RAM and SSD are included in the SoC. While I don’t particularly like dongles myself…the SD slot is almost useless these days as camera vendors, particularly the ones the pros might be using…have shifted to XQD or CFExpress Type 2 cards instead. I would like to see MagSafe come back…but given the EU’s insistence on a common USB-C charging capability I would be surprised if we see MagSafe again.

But I guess we’ll know tomorrow.

One shouldn’t confuse “user-upgradable” with “user-replaceable”. User-replaceable RAM isn’t going to happen ever again, as you pointed out. That doesn’t mean we can’t hope for user-upgradable RAM, as in the ability to add additional RAM. That doesn’t require any changes to how pre-installed RAM is integrated; all it requires is providing the appropriate slots and access, and ensuring proper firmware support.

In other words, the biggest obstacle to Apple allowing users to add RAM isn’t the integration of the pre-installed RAM. It’s Apple’s insistence on preventing users from accessing the internals.

Not going to happen (probably) with an SoC design. With the RAM built into the SoC, having to add RAM slots and all the appropriate interface stuff (since the DIMMs get accessed differently than memory in the SoC) is going to be too much work for too little gain even assuming it’s possible in the first place.

I could see…maybe…an internal connector where one could plug in an additional SSD to have more internal storage space…but again the interface requirements, needing to leave space for the might be added second SSD, loss of some internal space that could be battery instead, the low likelihood it will actually be used when more storage is easily added by USB-C or TB externals, and the cost of all of the above and it’s pretty unlikely to happen.

Me…I’ve got a TB in my current 2015 rMBP and hope to buy a new one after today’s announcement…don’t know whether it will be the new one or the M1 MBA, depends on price, weight, performance gain and all that jazz…my current drive is about 55%-60% full and I imagine the new laptop will last another going on 7 years like this one did…so I’m tempted to spring for 2TB at purchase.

Possible important breakthrough for pro users in the new MBPs: There are 8 screws on the underside of the new MBPs shown during the streaming event Monday. I captured this screenshot. Maybe there’s hope for user-installed SSDs, at least, and possibly even RAM. 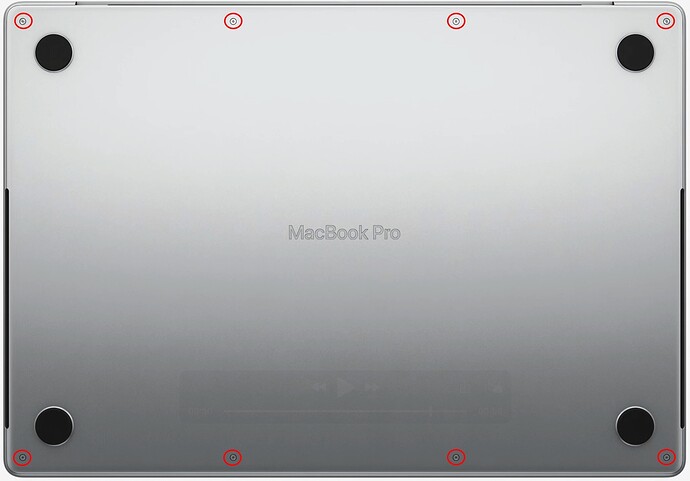 I listened to the MBPro portion of Apple’s event.
While it appears that the new display is the best ever, I think I was hoping
for a little more definitive confidence on, what I think is a bit of a chronic… in regards
to back-light leakage.
Is the mini-LED tech just better, or does it specifically engineer out the back-light performance issues of previous laptop displays?
I became sensitive to the issue when one of my pristine, but used MBPro 2015 acquisitions did have a predominant display malady (which subsides after warm up)
Technicians either did not, or could not warrant as a repairable issue. Since then
I notice all the variations of back-light leakage on the laptops I see around.

Those screws aren’t new. My 2019 16-inch MBP has pentalobe screws in the exact same positions. I can’t tell in your screenshot if the ones there are also pentalobe, but odds are that they are. The screws are for technicians to access the inside, not the user.

Not to mention the next frames in that video attest to a rather daunting array of secured access areas … lot’s of compartment covers to remove and the like.
In my experience, while the MBPro 2015 had an easy SSD replacement process, I think the battery in the 2015 is a slightly more-different level of difficulty, for us more-average DIYers
Later years introduced a lot more soldered connections on components.
Not to mention, the Event presenters probably would have mentioned the term “expansion” in their verbiage …

There’s no hope for any of that I fear…RAM is in the SoC and the SSD is almost assuredly soldered in place.

I’ll use Migration Assistant for apps and such…can’t decide whether migrating the user accounts or moving the homedirs and then creating new users with existing homedirs to get all the permissions set right is a better idea. I assume that Migration Assistant does all the user number and permissions things right…but at least in the case of the Shared user folder it didn’t on my last use of it…I had to fix that as all users only had read permissions instead of the R/W that it had before the migration (Big Sur backup to Big Sur replacement SSD).

I did consider starting over with user accounts and reinstalling apps from scratch…but that’s really a whole whole lotta effort for probably very little gain.